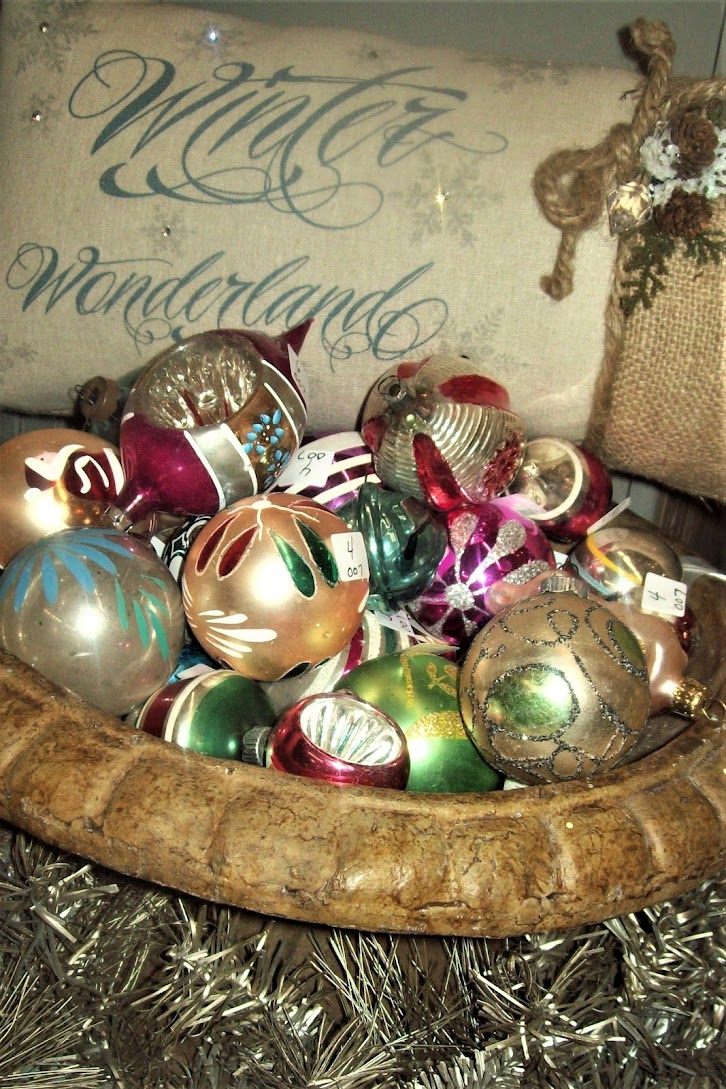 This Post starts out one kinda way when everything was Fine... and ends with it NOT being... and a huge personal crisis on Thanksgiving that blindsided us during the Holidays. The Daughter has the whole of Thanksgiving Week off Work and so does Princess T from School, so I can Sleep in, but dont'cha know I can't manage to... dammit!   My internal Clock goes off too early and then I can't manage to go back to Sleep even tho' I don't need to get up early.  The Man never Sleeps in, he's an early riser whether he needs to be or not.  But now, with a house full, he ends up waking me up being intentionally noisy by staying in our Room and being restless 'til I'm up.  *Le Sigh*   Before he could wander into the Main parts of the house, but then he'd now be waking Kids up doing that. 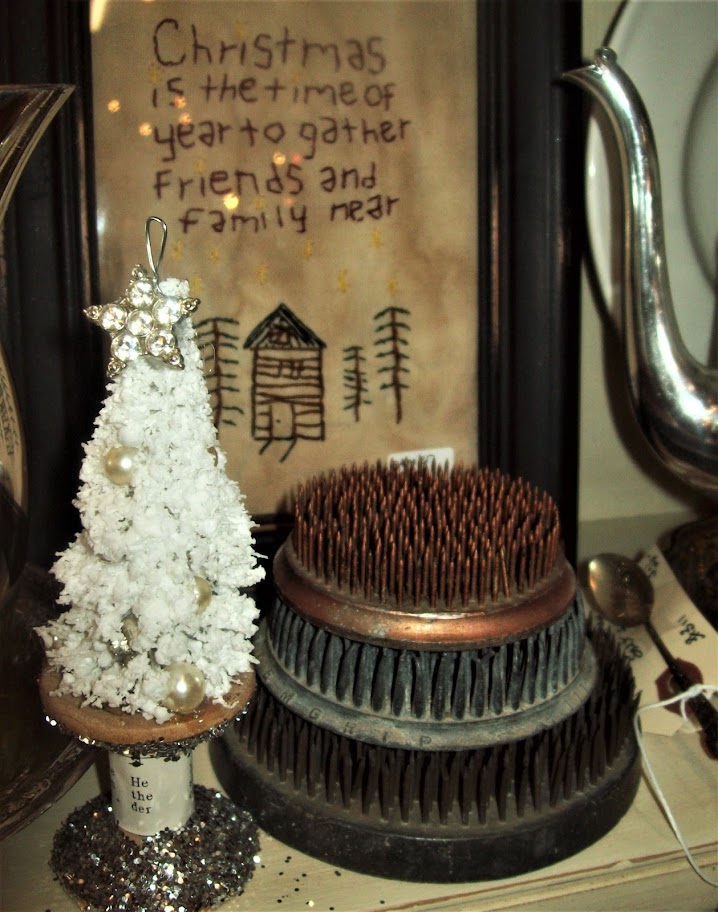 The Daughter got all ready for Work before she realized she didn't even have to go in.  Which meant she got me up to take her, then we both were all dressed up with nowhere to go at 6:00 a.m.!  *LOL*   The Man is pouting now that he's not got anywhere to tag along to.  *Ha ha ha*  He doesn't know or care where he's going, he's ready to be on his way.   Too Cold outside to take him Canning, he is missing doing that as often as we were when it was Warm enough to go early to do it.  He got to Yesterday when Juan Carlos and Princess T asked to be taken to the Duck Park to feed the Migratory and Domestic flocks there.   He collected Aluminum while we all fed the Birds. 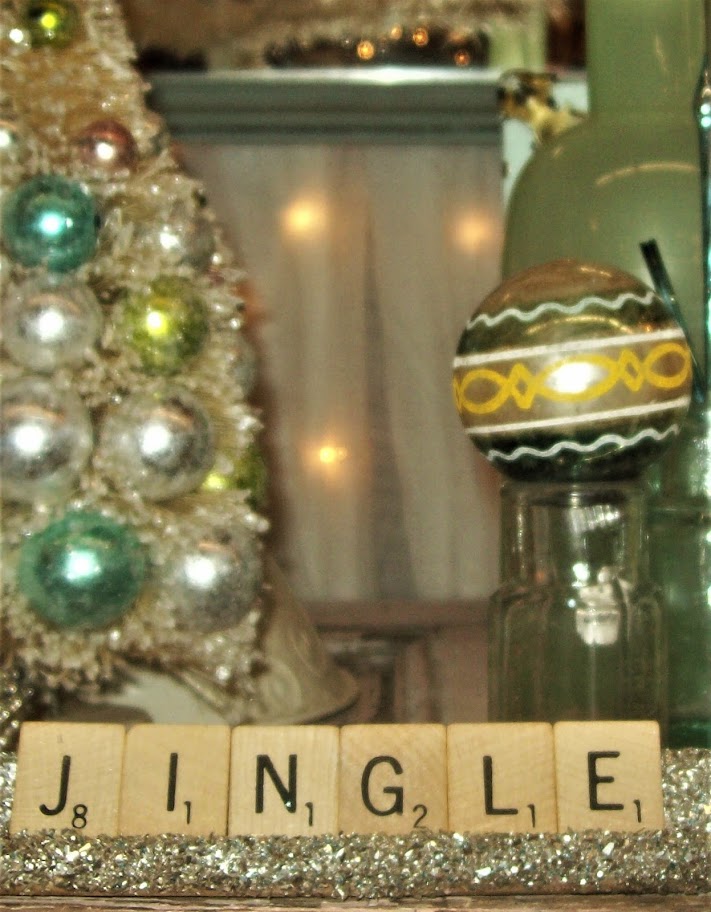 There were more Wild Birds than Domestic ones that day and they gobbled up the Wild Bird Seed we provided.  Usually people feed them crap that isn't Healthy for them, but that silly Humans think Wild Birds eat in the Wild... you know, like White Bread and French Fries.  *Eye Roll*   We feed Wild Birds on our Property too, I keep a Dove/Quail Block out all of the time and then supplemental Wild Bird Seed Mix.   Princess T and Juan Carlos put up my Christmas Tree for me, they'd spent part of the day putting up the taller one that then they had to take down since it wouldn't light up.  I spent the Day decorating the second one they put up.  I added some Fairy Lights, a strand of 100 since there were some of the Pre-Lit Lights that weren't working anymore in some small sections on that Tree too.  *Le Sigh* 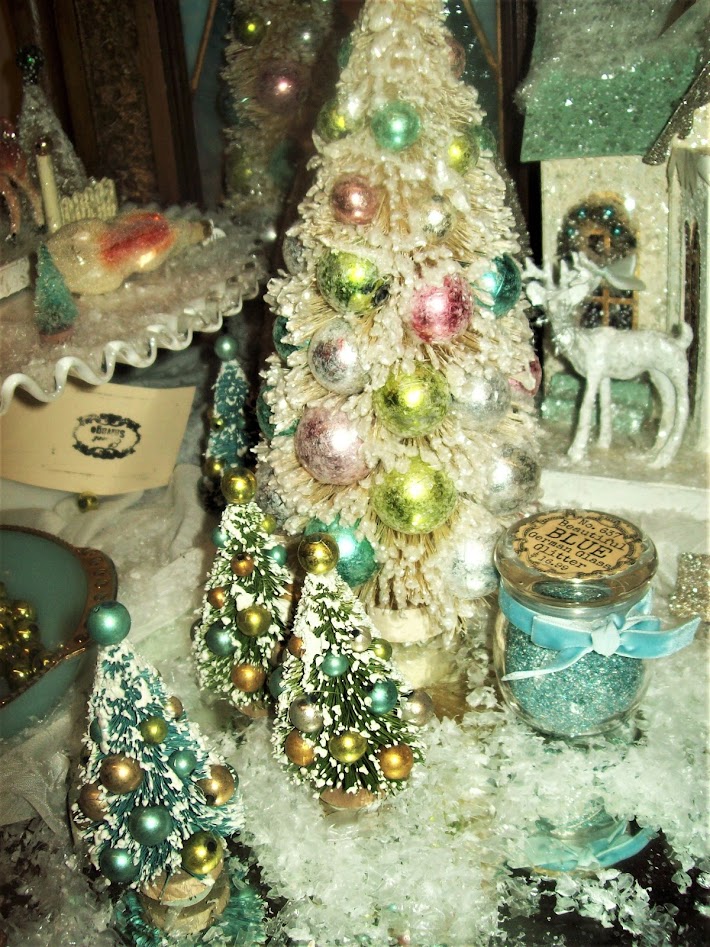 But, it's a nice Tree and I wasn't ready to Donate it too, like we did the 9 Foot one that the Lights had gone out on and we had to take down to put this one up.   The Donated Tree looked more Realistic, but would have been more problematic to try to replace the Lights on.   It was discouraging that both Trees had lighting problems, the Pre-Lit Trees only really last a few Years before the Lights malfunction.   Taking Lights off a Pre-Lit Tree is next to impossible, you just have to overlay new Lights as best you can if you want to get more use out of the Tree after it's original Lights malfunction.   It's not like just a single Bulb goes out, an entire Section's Strand goes out.   More had gone out on the taller Tree, only one Section would even light up anymore. When we went to trade in our Aluminum Cans at the Recycle Center, the Owner had Scored Six Metal Vintage Milk Crates and agreed to Sell them to me for a mere Five Bucks each.   Which just happened to be the exact amount of my Aluminum payout, so it was an even Trade/Exchange, making he and I both Happy and Laughing at the ironic Negotiation.  He gives me Thirty Bucks, I hand it right back to him.   He gets Aluminum, I get a half Dozen Vintage Milk Crates.   Now, if you're Wondering why this Trade made me super Happy, Vintage Metal Milk Crates go for between $35-$60 or more each now in the Industry.   I Keep all of mine for Decorating and Utilitarian Purposes, but, that's what I could get for them Resale.  The Scrappers Pay Five Cents a Pound for them.  So, both he and I Profit and they don't get Scrapped.  Win-Win. 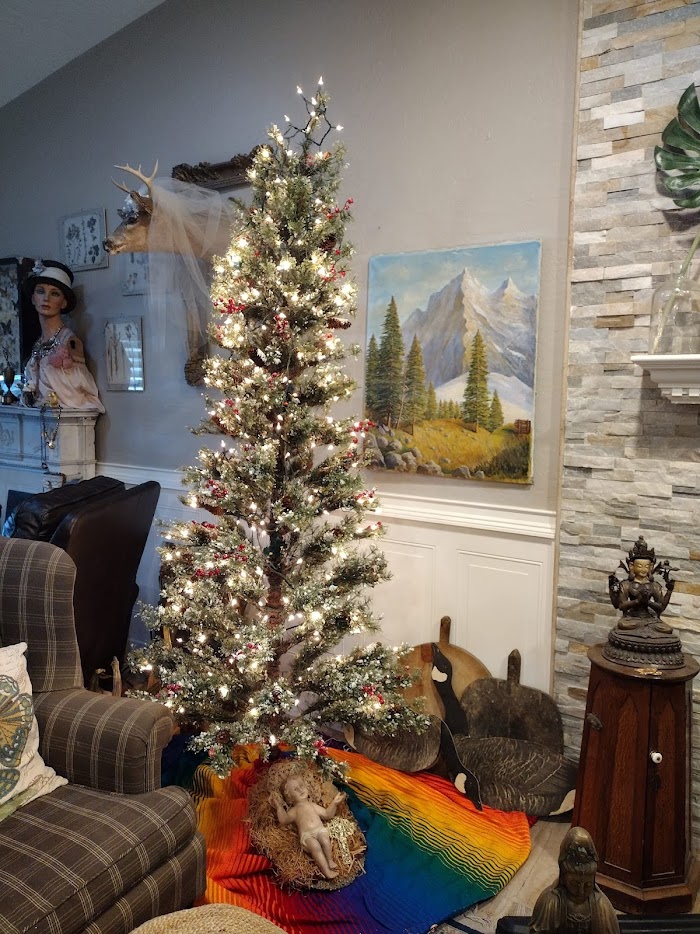 So, here's our Tree after I installed 100 new Fairy Lights to the very Top and a small portion of the Middle.   It wasn't yet Decorated in this pix, but it did fit nicely in the area we usually put the Tree, I didn't have to reorganize much of the Room, just move some of The Son's possessions.   This Room has most of his Worldly Possessions in it in Suitcases, Tubs and Piles.    I wanted to keep it Simple and just Colorful this Year, so I broke out the Mardi Gras Style Shatterproof Ornaments.  The Daughter helped me with some of the Decorating, but she and I were Butterfingers and kept dropping Ornaments, so it's a good thing we had decided on the Non-Breakables and not the Antique Ornaments. *Whew* 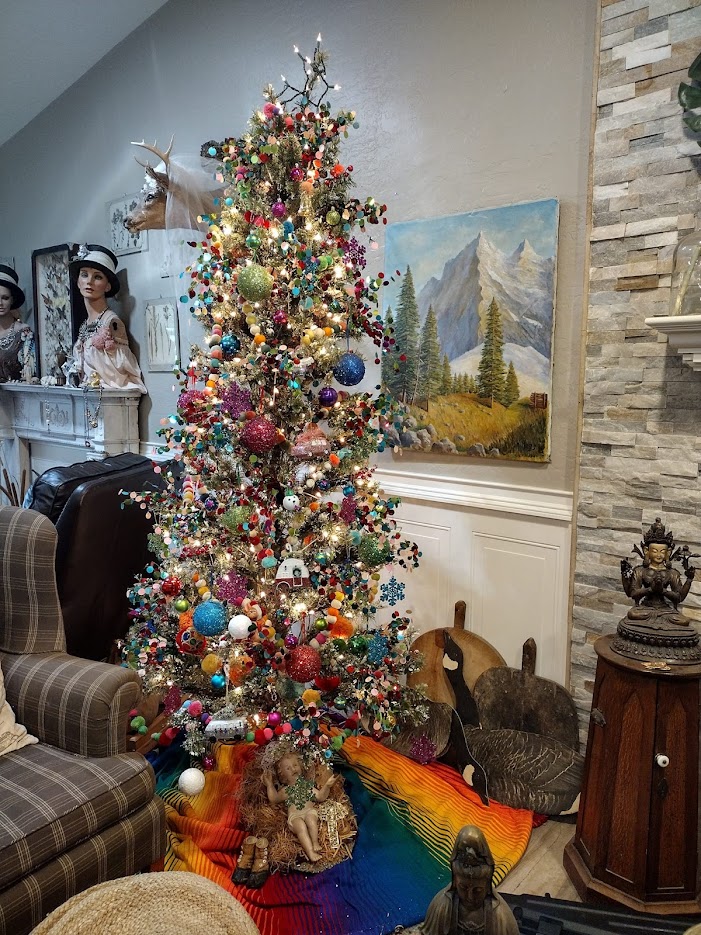 And here it is, mostly Decorated, I did spend some time after this filling in some blank spots on the backside.   This is the most visible side and the most accessible side, so I concentrated on this side.   The Ornaments for this Theme haven't seen a rotation in several Years, but it is a Fun and Quick Theme to Decorate a Tree with when you don't have or want to spend a lot of time fussing with it to put it all up and take it all down.  And this Year I wanted to keep things Simplified and save Time.   I just didn't have it in me to do a lot of Work and spend a lot of Time on Decorating for the Holidays. 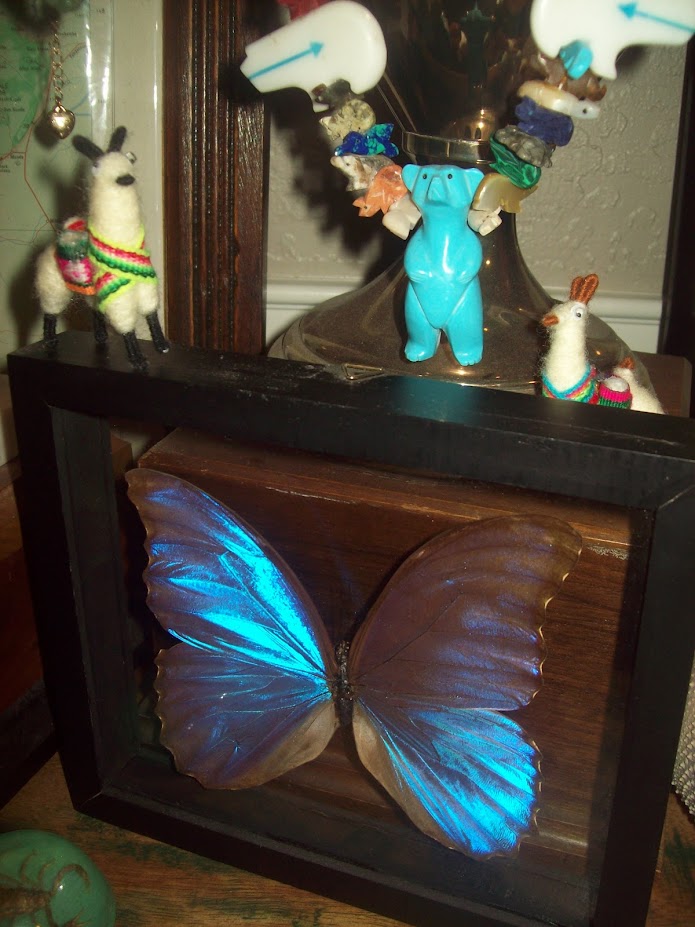 I'd been called in to Work Thanksgiving Eve to Work the Night Shift.  We're dealing with a serious personal crisis right now that happened the Evening before Thanksgiving just after I got Home from Work.  The Daughter and The Son were in a bad car accident.  So of coarse Thanksgiving is mostly about Dealing with that crisis now.  I was ill prepared to receive such alarming News and that always takes me back to the fateful day that The Man was in his catastrophic accident and Life forever changed from his injuries and the circumstances of what caused it.  It's not something you want to relive twice, that's for sure.  This accident seems like it is as complex as all that and the details elude me at this time... I've got hurt Loved Ones, a totaled Vehicle and more Questions than Answers... like The Man's terrible accident, it happened just Blocks from Home and was that Call you never want to get... Not a 'Happy' Thanksgiving at all after all... Dawn... The Bohemian