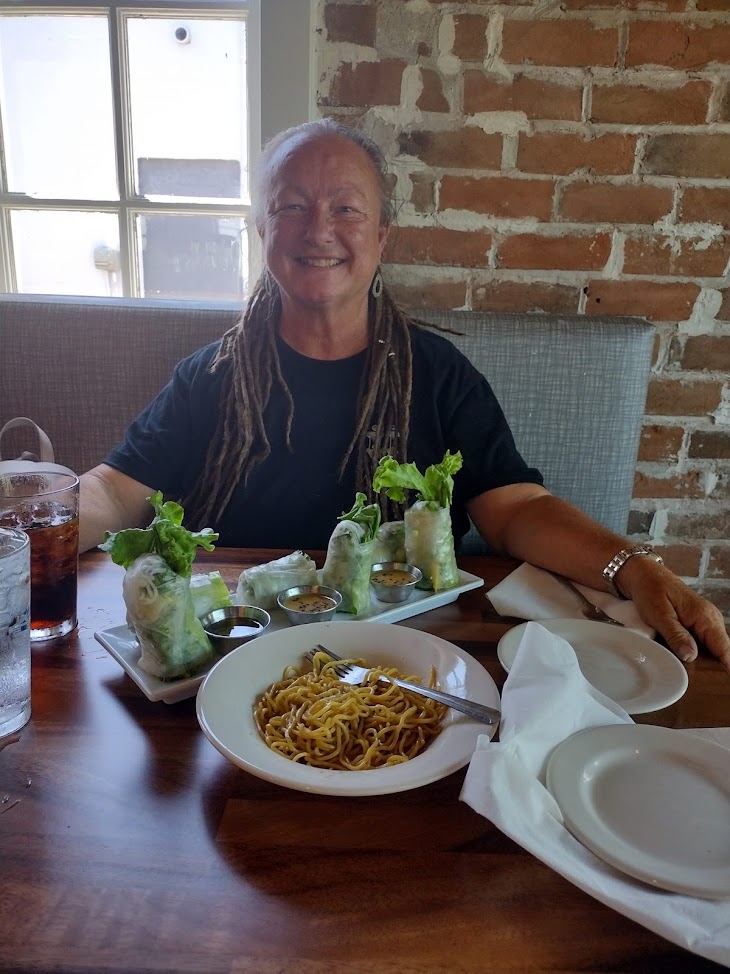 So, I spent the whole Morning and part of the Afternoon at County Hospital with The Daughter.  Pix above was late Luncheon afterwards. She had to have an Abscess lanced on her Underarm, she'll be Okay, we got it early enough before it became seriously infected.  They said she'd Qualify for a 'sliding scale' fee since she has no Insurance... and wanted $200 up front.  I told them she had no Money and very little Hours on her Part Time little Job, would be Homeless if not staying with us, so we could do $50... they accepted.  I figured they would, since about 99.9% of the Clientele waiting to be seen wouldn't be paying them anything and would get everything for Free. 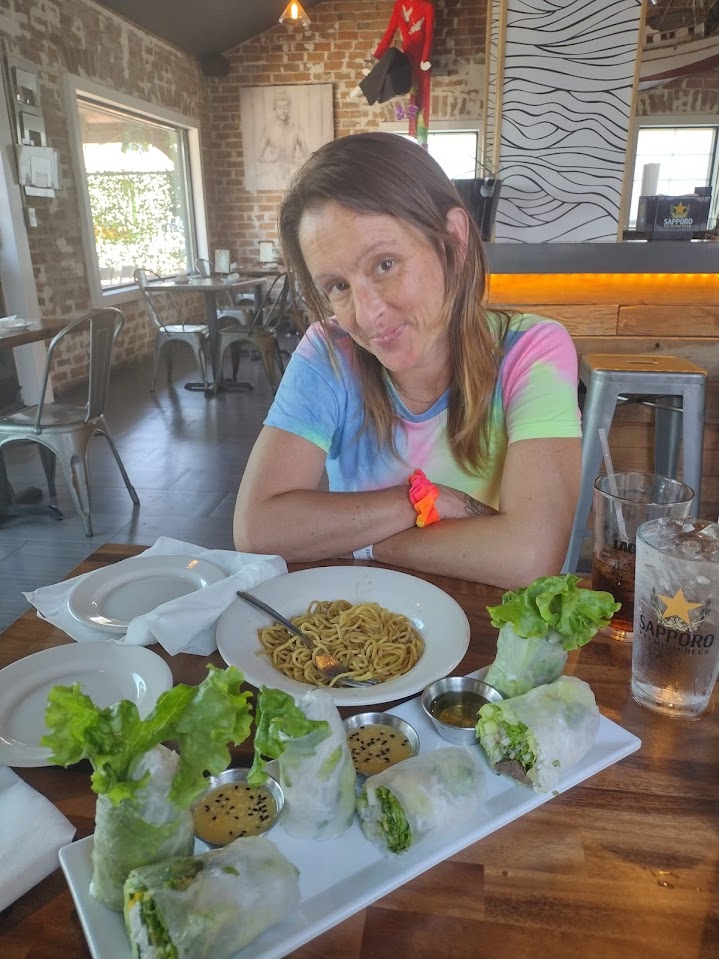 A Young Black Gangbanger Hard Case who'd had a shunt put in after being shot, was giving Security a really hard time in the Waiting Room.   He'd been ranting about needing Fifty Cents to buy some Bottled Water and kept wanting to leave, they wouldn't let him.   I could see it would escalate to a ridiculous level and that wasn't necessary even tho' he was being ridiculously uncooperative.  I'm pretty sure he was High as a Kite and feeling disrespected.   So, after it had become quite The Show and they had ALL their Security there unable to Handle him, I walked up with Fifty Cents. 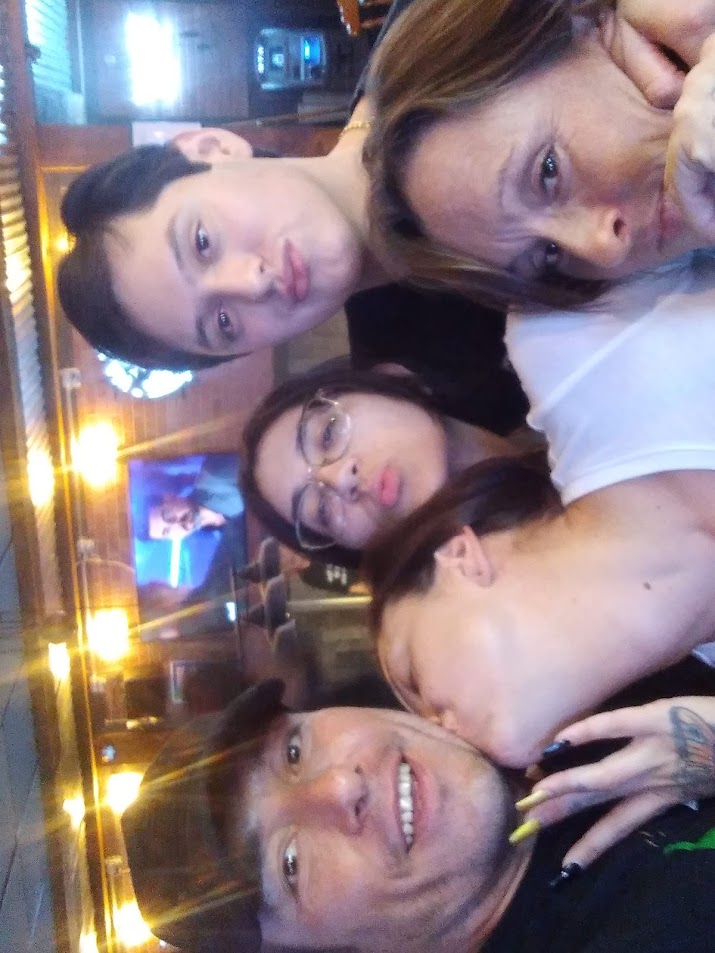 I said, firmly yet Lovingly, as if speaking to an unruly Grandchild, "Listen Son, here's the Fifty Cents you need for your Water, but I want you to come back inside and Behave until they can see you and get your Treatment squared away, Okay?"  He calmed right down, and very respectfully said, "Yes Ma'am, Thank You" and shook my Hand to seal a Deal between us, Promising to Behave... and he did... so, disaster averted, which could have gotten really Hairy.  Everyone got to Save Face, which is more Important than most people often realize. 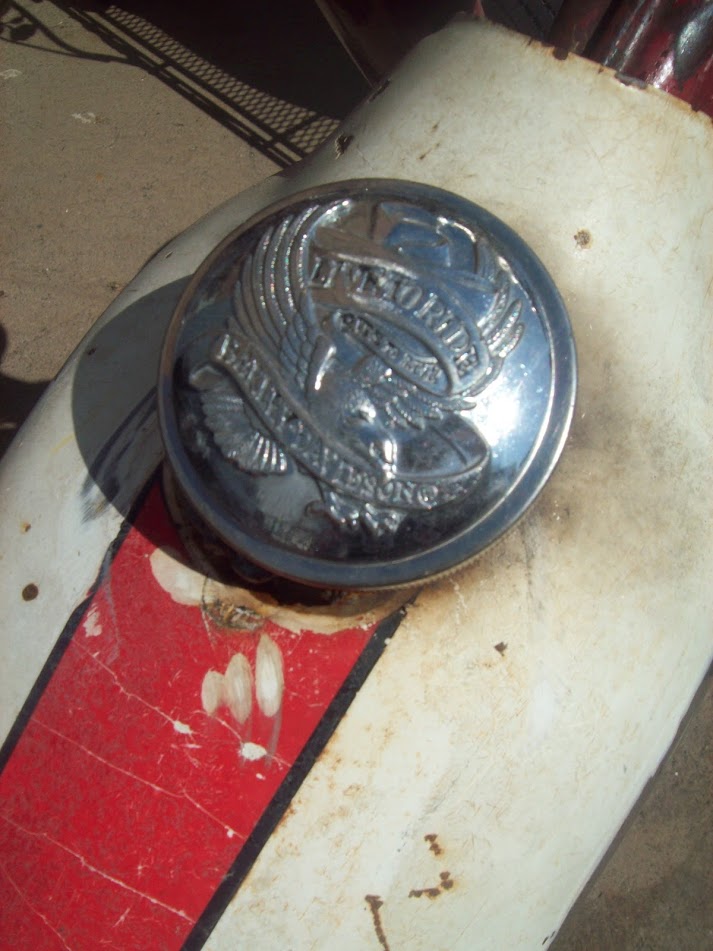 All the Security Guards were big Guys, but quite overweight, out of shape, and Older fellas.  I could tell they had become not only irritated with him, but had felt some kind of way about him as soon as he'd walked thru the Door, and I felt he instantly picked up on that contempt.  So, he gave them what they clearly expected.  He was a strong looking, extremely fit Muscular Guy in his 20's, with so much Serious Gang Flash, that I knew he was a Hard Case and things would go Sideways real fast once he flipped out and felt he had to go to the Mat with Security. 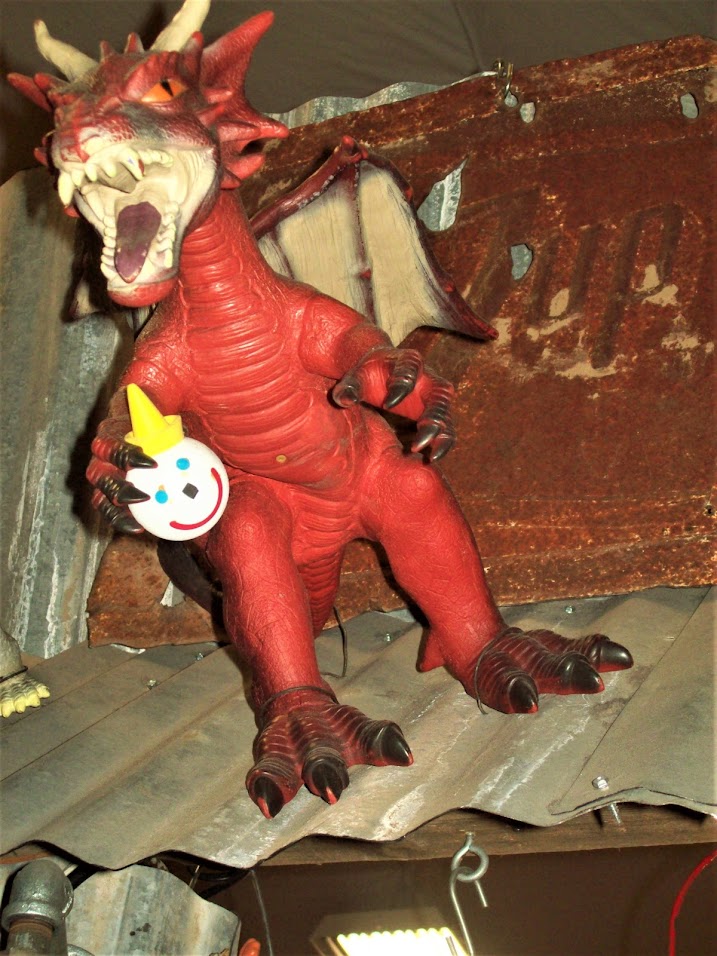 I could tell he didn't like being told what to do by any other Man and probably felt disrespected and Losing Face, even tho' he was being difficult on purpose, probably since he was impaired by Drugs.  Clearly he'd already been recovering from being shot, this isn't someone they were intimidating in the least, it just became a Showdown of who was more Bad Ass, Saving Face, and Testosterone laden in front of a captive Audience.  *Le Sigh*  I wasn't there for Lunch and a Show.  And why have anyone risk getting hurt and escalating, when Fifty Cents, given compassionately and respectfully, would possibly diffuse the Situation, so he could get some damned Bottled Water since it was 106 Outside? 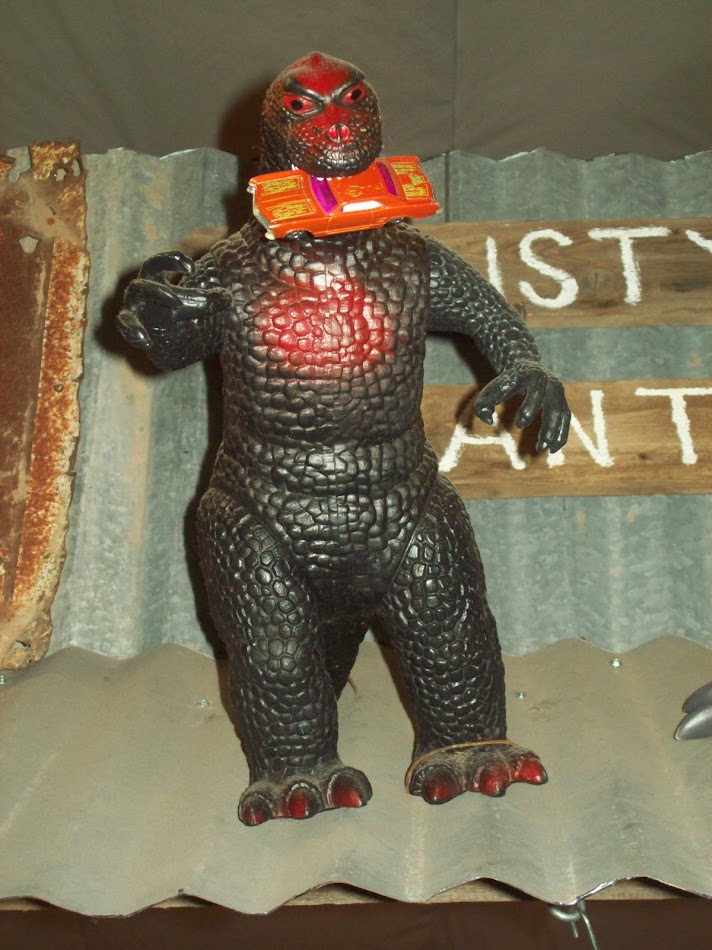 It was worth Two Quarters to me and The Daughter, not to have to Witness an escalated situation that would seriously also delay all of us receiving the Treatment for whoever we'd brought in!   He also pulled his Pants up from around his Knees to up around his Hips and put on a Shirt, once Calmed down and asked nicely to this time.  *Whew*  The Daughter is very Street, but she was getting annoyed at the Standoff between him and Security over a trifle, it was getting ridiculous and quite unnecessary.  It was making Staff and other Patients anxious and nervous.  He'd kept approaching people who couldn't speak or understand English and it was clearly Scaring them. 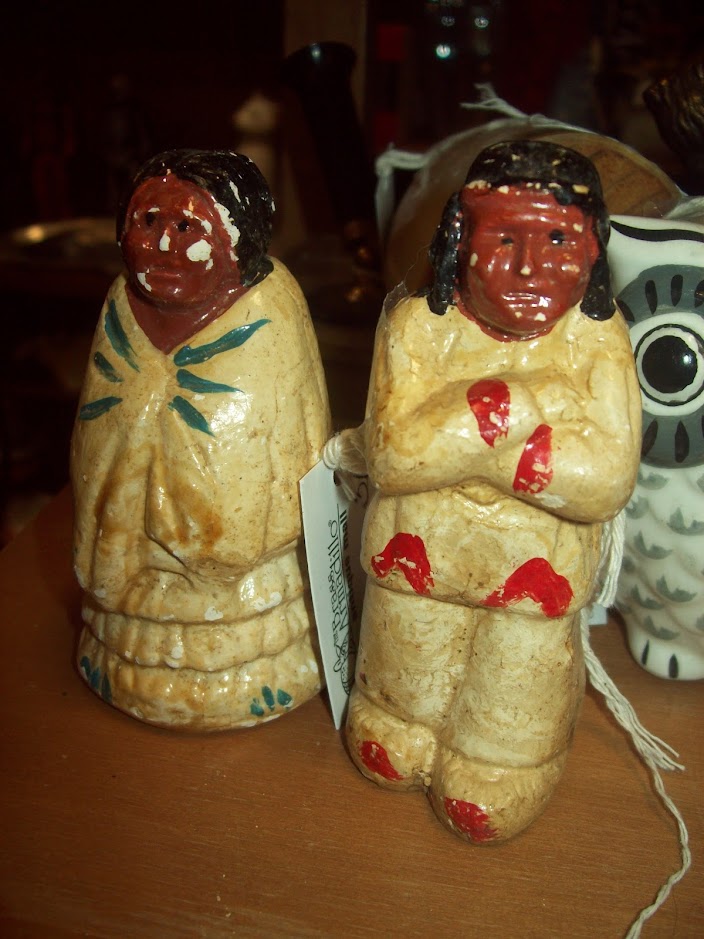 He hadn't been bothersome to us, but he was being bothersome to people that he'd sized up as being able to perhaps Scare or shake down for Change or Cigarettes.  It was appropriate for Staff to get Security to make him just stay inside after being Checked In and leave other people in the Waiting Room alone.   Yes, it's quite the Human Sideshow down there at County, I'm Retired from County, so my whole Family are in that Hospital's System still, including The Daughter.  But some Hospitals won't even take someone without Insurance and I didn't want to Deal with that whole shitshow of the Uninsured being denied Care.  Plus, County is an excellent Hospital. 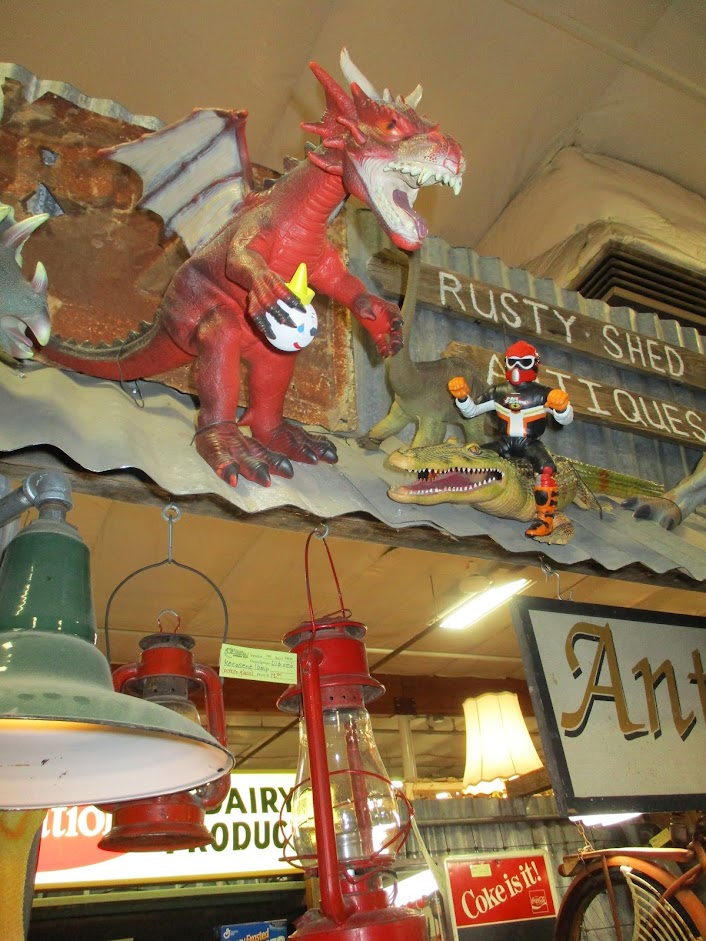 Her Blood Pressure was very low so that concerned them too, and tho' they wanted her to also get the 2nd COVID Vaccine she needs, they were out of Moderna, so she couldn't.    When they knew she'd lived in Mexico for almost the last Two Decades, they understood her hesitancy to receive Care, she's had some bad experiences South of the Border with Standard of Care too.  They were very good to her and gentle, which relieved her Anxiety considerably. 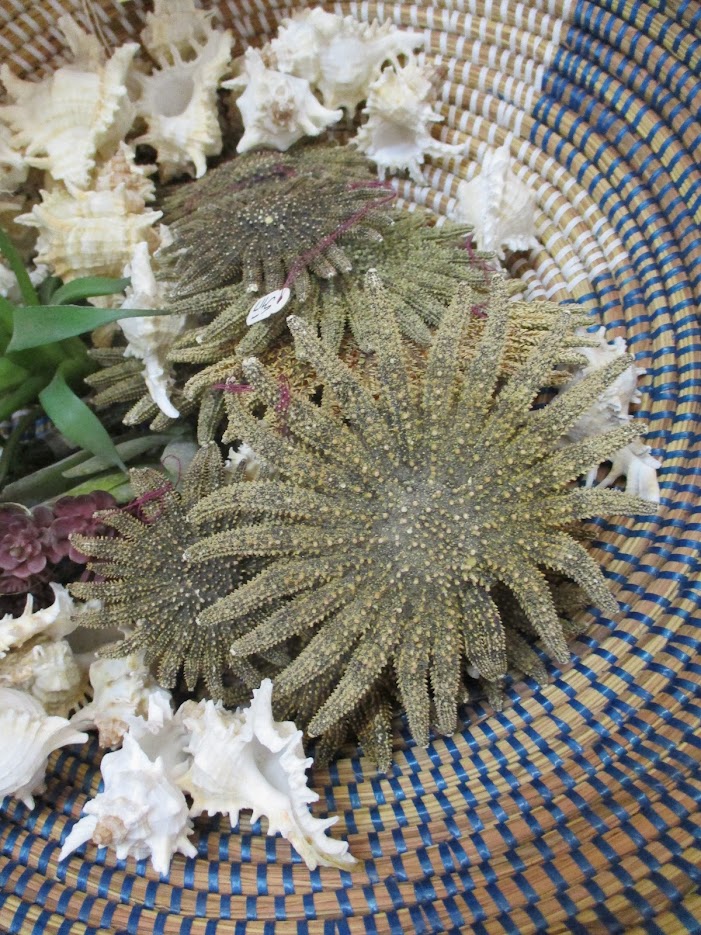 I know the whole Staff also appreciated me Mediate the Gangbanger Dude Situation with some Diplomacy, so he'd Behave and not have a Scene or make people afraid to remain for their turn, so I was being Thanked often.  *LOL*  She's had these Abscesses recurring and in Mexico they often lance them without the benefit of numbing, so she was extremely anxious about how much agony she'd have to endure?   She didn't feel anything after they numbed her up, but of coarse now it's worn off, she's pretty sore and will be until it heals. 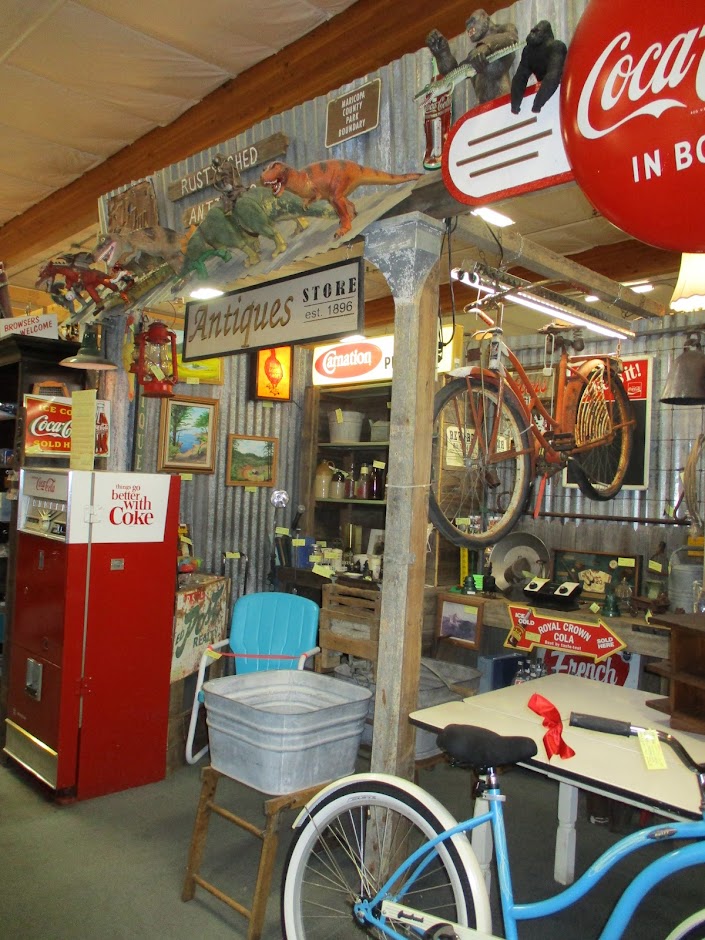 Part of her being run down is due to Years of Poor Nutrition attributed to 3rd World Living for so long and being Seriously Mentally Ill and unable to take proper Care of herself... and many Years of being an Addict and Homeless.  Now she's Clean and eating Nutritious Meals, not living on the Streets, we're Hopeful she'll have a more robust immune system?   She's been doing very Well actually, we enjoy our Quality Time together. 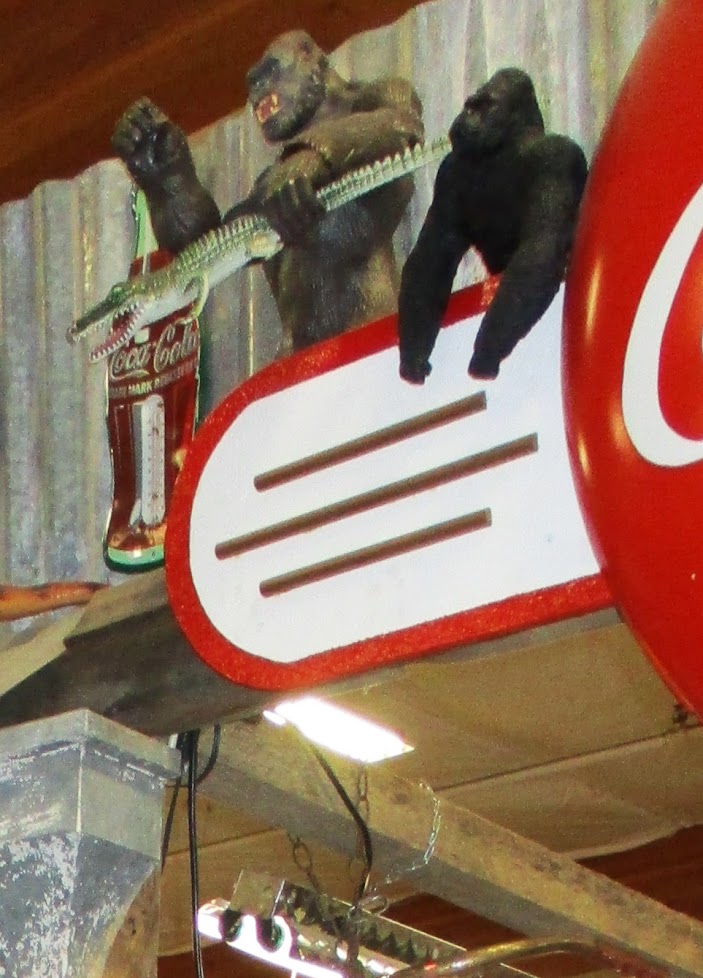 We had a lot of inappropriate Laughs... especially about Gangbanger Guy and the Security Guard standoff, before I finally told her I'd see if Security would allow me to intercede and see if that didn't Help?   She joked that if anyone in the Waiting Room could tell him to Behave and get Compliance, it probably would be me, so might as well give it a go. *LMAO*  She even Ponied up the Fifty Cents to see how long it took me to convince him to Behave?  *LOL*  It only took about Five Minutes tops,  tho' he was definitely not one to obviously get along and play well with others... perhaps he has a Gramma he does Love and Respect and if I reminded him of her telling him he HAD to Behave, he might.  I was relieved he did, didn't need or want Man Drama and a Headache.  *LOL* 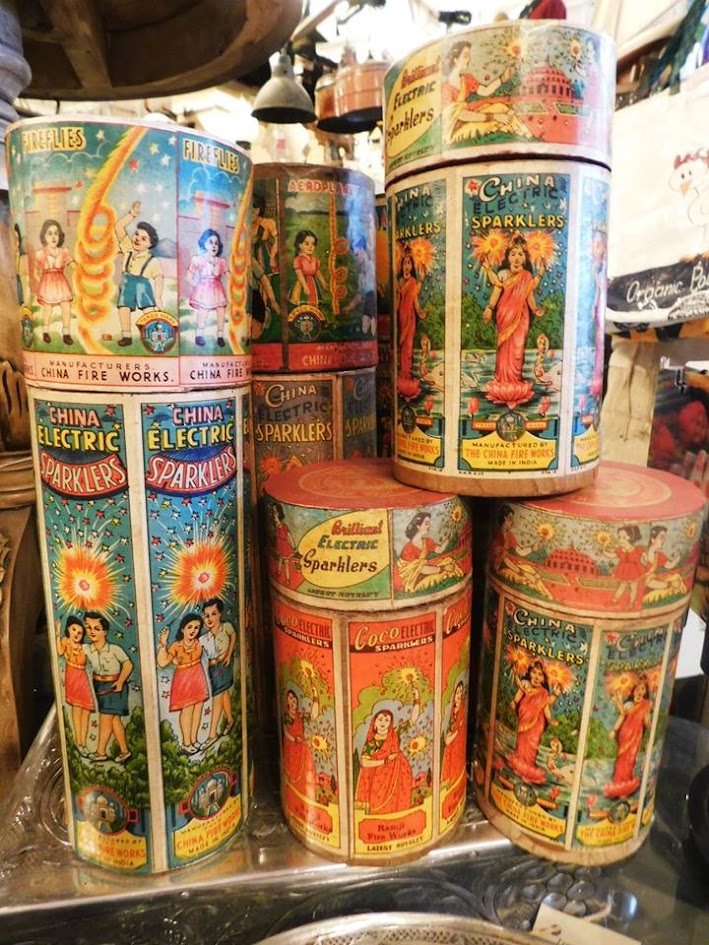 She also Laughed raucously later, on the way Home, about the line of Questions they always have to ask, like, "Do you feel Safe at Home..." and she's exaggerating that of coarse her Answer would be Yes, since 'she' {ie: Me} was standing right there behind her.  *LOL*  She pretends to replay the Triage Comedic Style, Winking desperately at the Triage Nurse and making Faces in Code while saying, "Why Yes, we ALL feel Safe around HER"... and nodding her Head my way.   Then saying, "You SAW how she Handled Gangbanger Hard Case, why... he wasn't SCARED of 'Her' and her Crazy Eyes at all... clearly..."  OMG, we Laughed until we Cried and our Bellies hurt, doing the exaggerated version of the Triage Answers.  *Smiles* 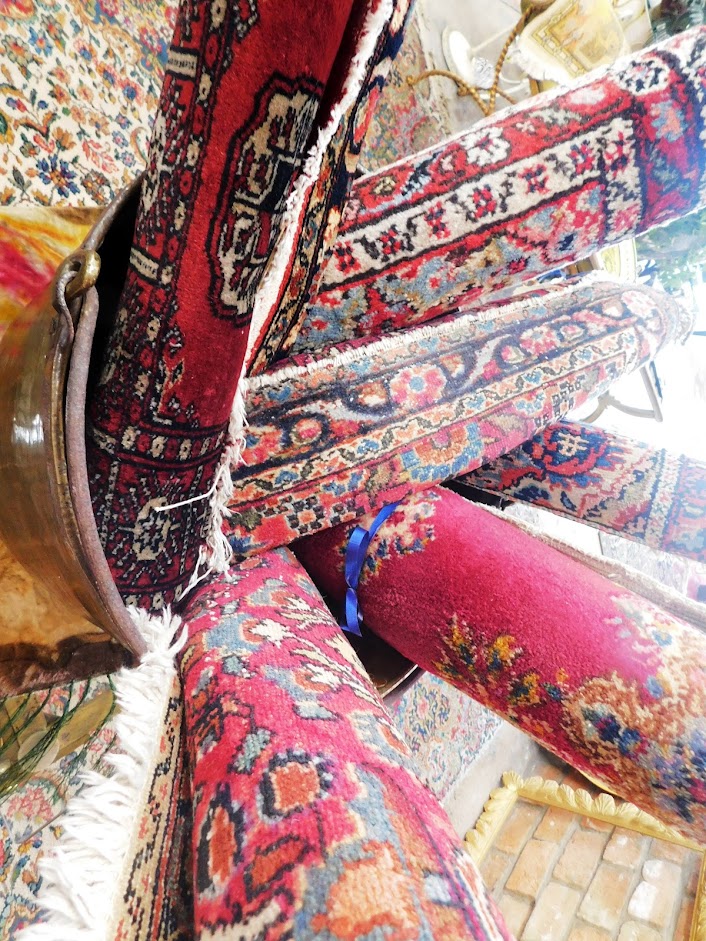 Then we went into a Comedic skit about a recent Goodwill incident where she found some Killer $24 Boots, they only put the One on Display and you have to ask for the other Shoe at Checkout, since apparently Shoe Theft is an Issue there.  Well, they couldn't find it in the back, so she couldn't buy them and was morose, they had been expensive Boots and Brand New, she REALLY wanted them. 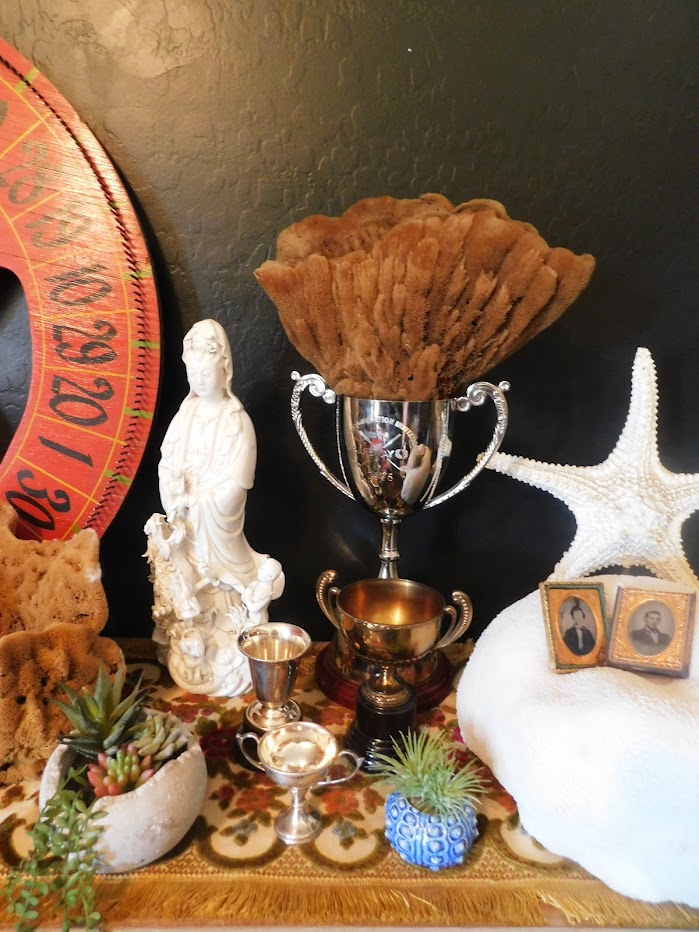 So, I'm exaggerating what we SHOULD have said, like, "Well, how much of a Discount will we get if we just buy the One?"  and "You can call us if you find the other one."  and "Or, if you have one that's similar enough for her Left Foot, that'll do..."   Oh, we were dying with Laughter of all the Crazy shit we COULD have said, just to see the Cashier's expression and reaction?!  *LMAO* 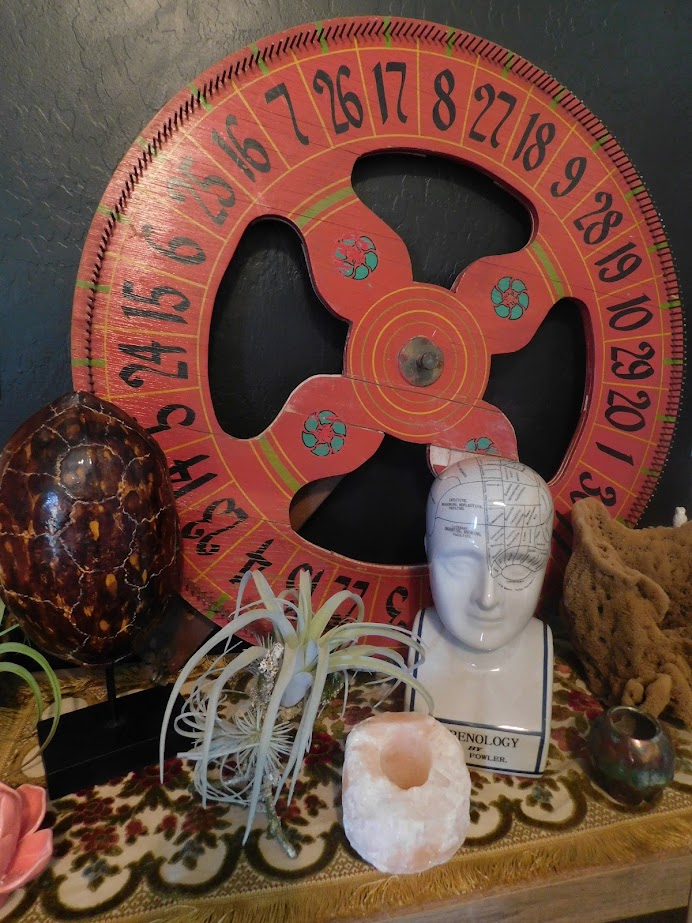 Listen, I'm sure they get a lot of Crazies at the Chazzas so they'd assume we were Serious... and it would be a lot of Fun to play it out like that actually, but we resisted and left without the Shoes or Shoe. *Smiles*   The Daughter was joking that the 'slow' Gal with clear Barriers To Employment that they had looking for the missing/matching Shoe in the Back, probably wanted them for herself and would be wearing them Home now?!  *Bwahahahaha* 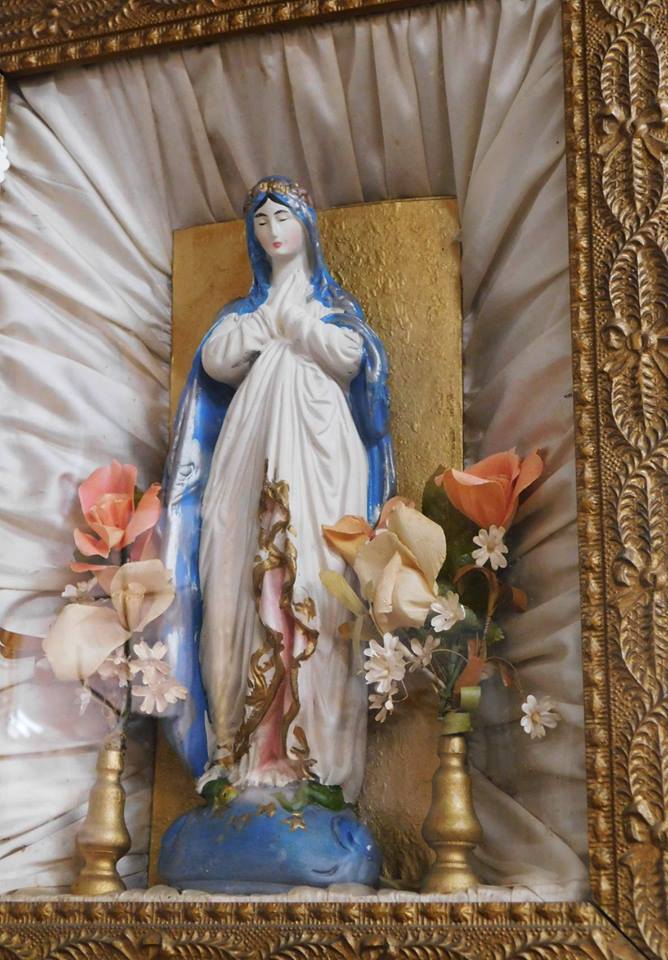 You had to see the Woman they had looking for that matching Shoe.  Bless her, she didn't look like she could find her Ass with both Hands, let alone a Shoe in the Back that matched the one we wanted to Buy and they're supposed to have Organized back there to match up their Better Shoes and bring up front for Purchase.  *LOL*   The Daughter says, "I should apply for a Job here Mom, I'm not even as jacked up as these people they've already Hired who have Barriers to Employment!"  Inappropriate Humor is our Specialty!  *Bwahahaha* 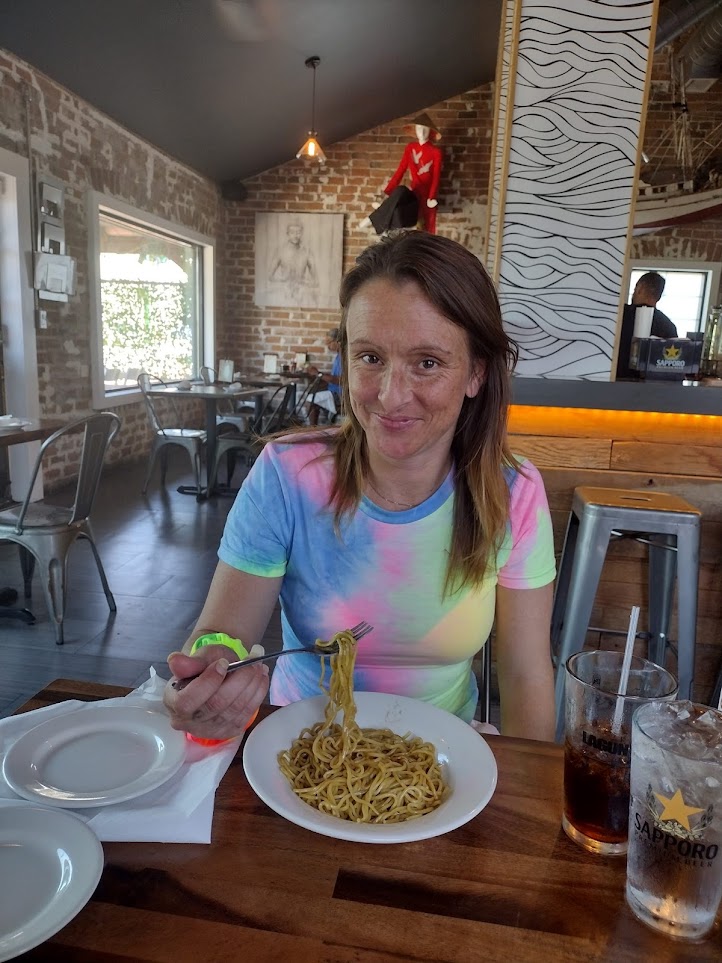 Anyway, I'd Bribed The Daughter to Behave and hold her Mud even if the procedure at the ER was Painful, since it was necessary, by saying I'd buy her Lunch and a couple Rum N Cokes afterwards at "Rice Paper".  They'd finally finished the Remodel of the place and didn't destroy the exposed Brick or the Ambiance of the Historic Cottage it's in, that I Love so much.  They'd just upgraded the Bar, Bathrooms and Kitchen area, whew, I told them I was Happy about that, not ruining what I most Loved about the place.  *Smiles* 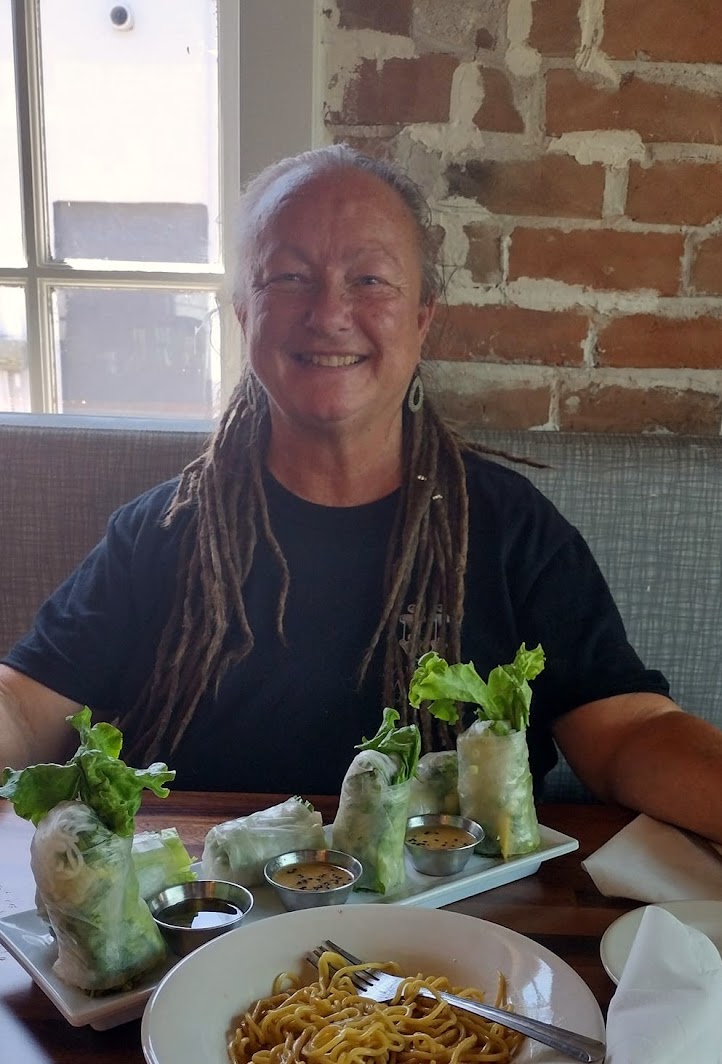 We didn't look none the worse for wear after our County Hospital Experience, did we?  *Winks*  She Loved her Garlic Noodle Dish, which is in the Foreground, we Shared the Variety of Spring Rolls, which they're Known for being a Vietnamese Spring Roll Bar.   I Wish I could show you how Cute all the Waiters and Bartenders are there... and they're so Adorable in Personality too, as well as being Eye Candy.  We brought Princess T her Fav as Take-Out, she'd been going thru Spring Roll Withdrawal during their long closure for renovation.  *LOL*  I know they missed us too.  *Smiles* 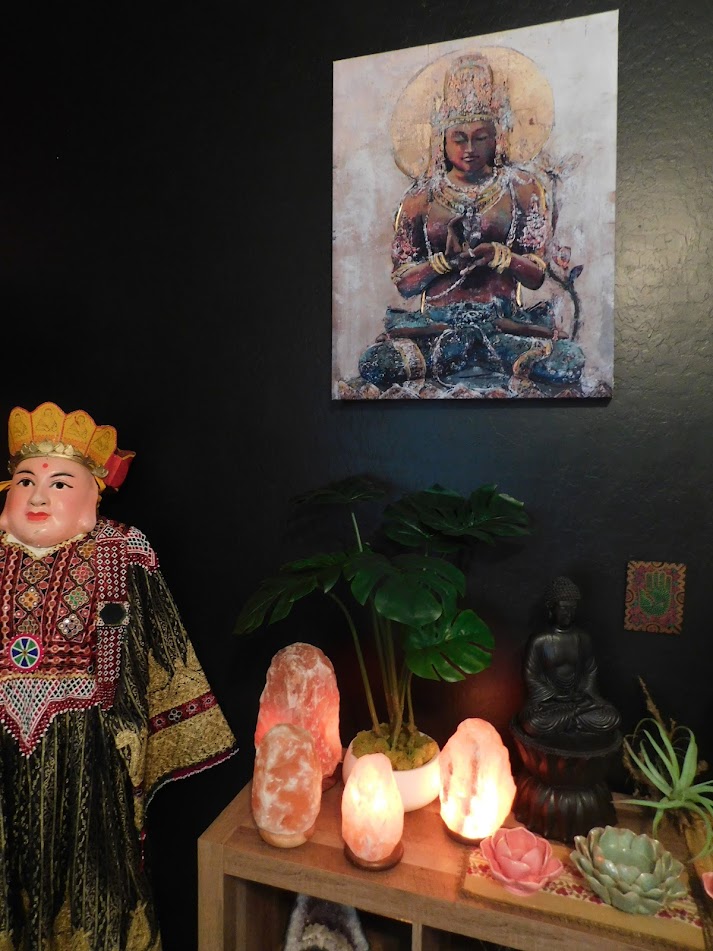 Blessings, Love and Light from the Arizona Desert... Dawn... The Bohemian