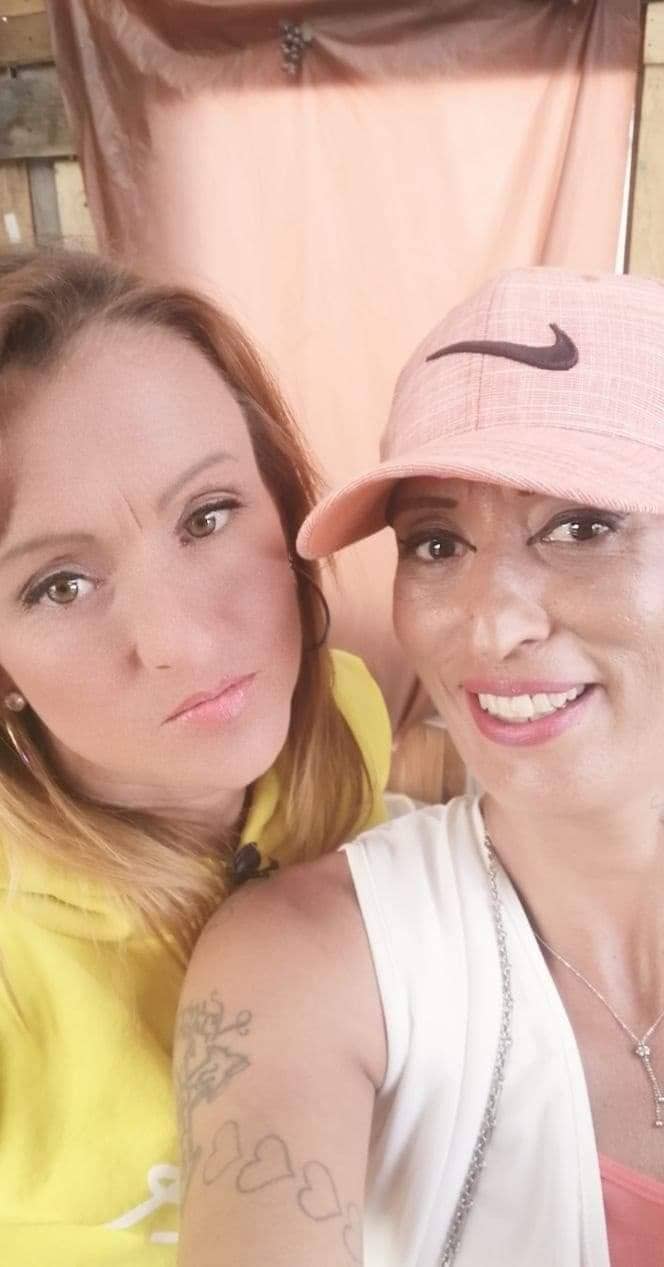 Our Youngest Daughter, The G-Kid Force's Mama, sent me a recent pix with her Friend, she's the one on the Left in Yellow.   I Love getting Family Pix updates via The Book Of Faces from everyone, which is where everyone Shares them nowadays and keeps in touch with us.   They know how to take the decent Selfies, I absolutely Suck at taking a Selfie.  I'm sure there's a Trick to it to make me look more Glam, I just haven't figured it all out and feel self-conscious taking a Pix of myself anyway.  I never know which angle is best or where I should look, so I always look positively demented.   *LOL* 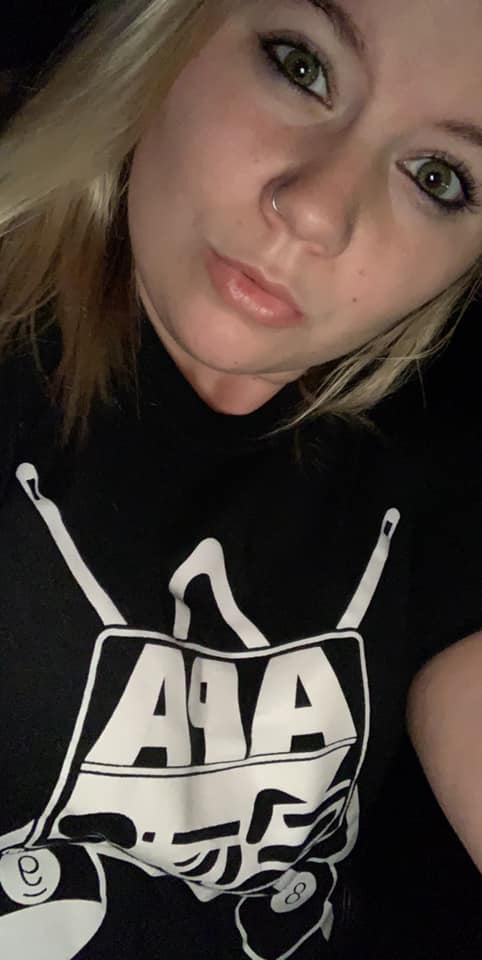 The Adult Granddaughters back East Shared some recent Pixs too, the Middle one has gone Platinum Blonde again... 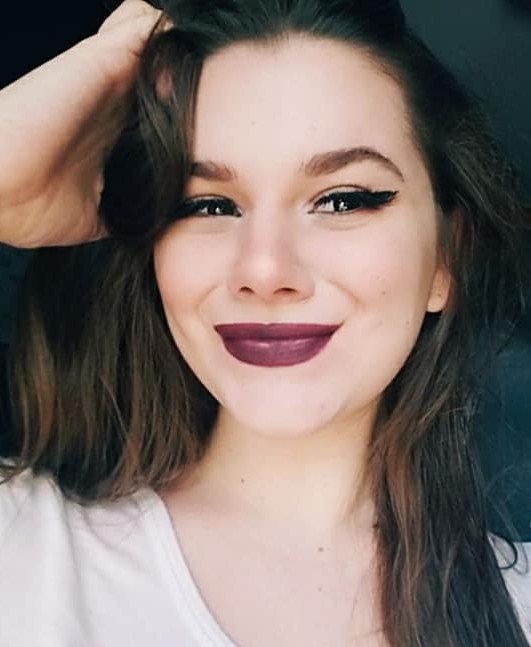 Her Younger Sister seems to have gone Darker Brunette again.   The Oldest Sister, since becoming a Mom a few Years ago, has moved past the Selfie, I'm sure she doesn't have time, chasing an active Toddler around, to sit still and take one?!  *LOL*  All the Adult Grands change their Hair Color so often that I don't actually recall what any of their Natural Hair Colors even was anymore?!  *Smiles*  Princess T is chomping at the bit to be able to Dye hers, which is about the same Age her Older Brother started on the Quest to have every Hair Color known to Man.  *Smiles* 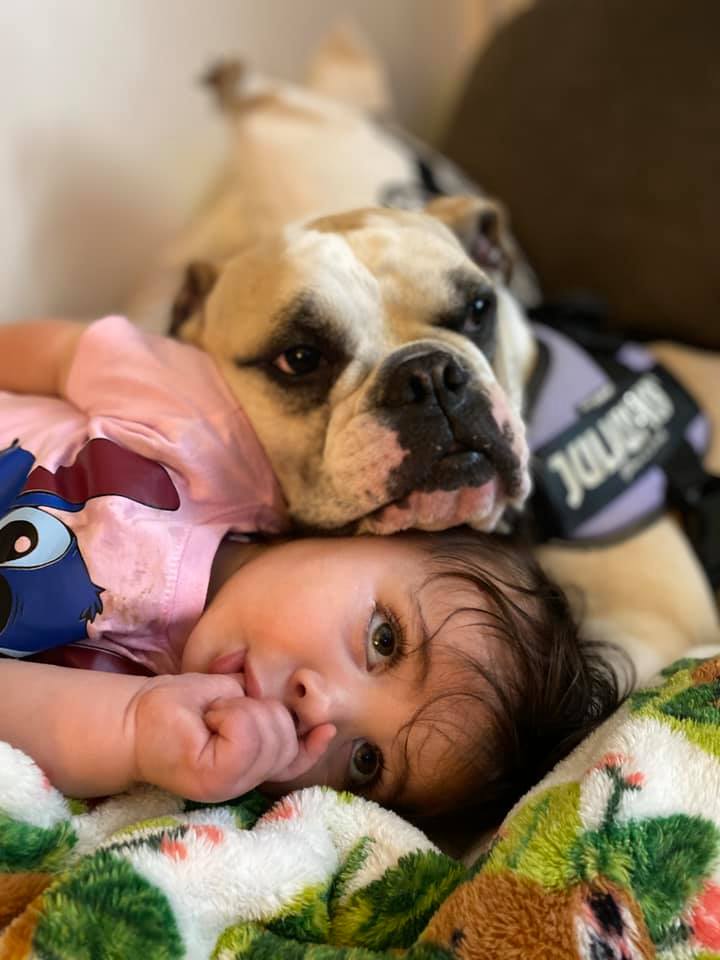 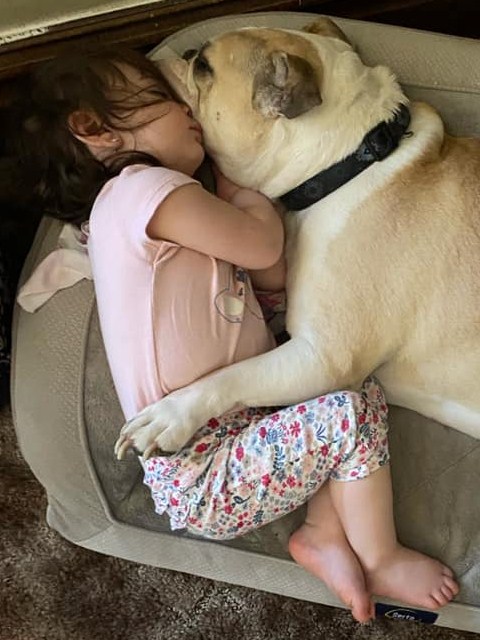 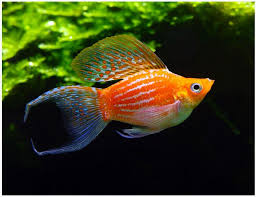 Because I only had a Juvenile Male Molly, not old enough yet to Breed and the Females in my Aquarium are getting Old and look Preggy all of the time, but so far haven't had any Babies, I decided to buy Three Adult Male Mollies.  I got a Creamsicle Sailfin Lyretail Molly Male that looks very much like this Image. 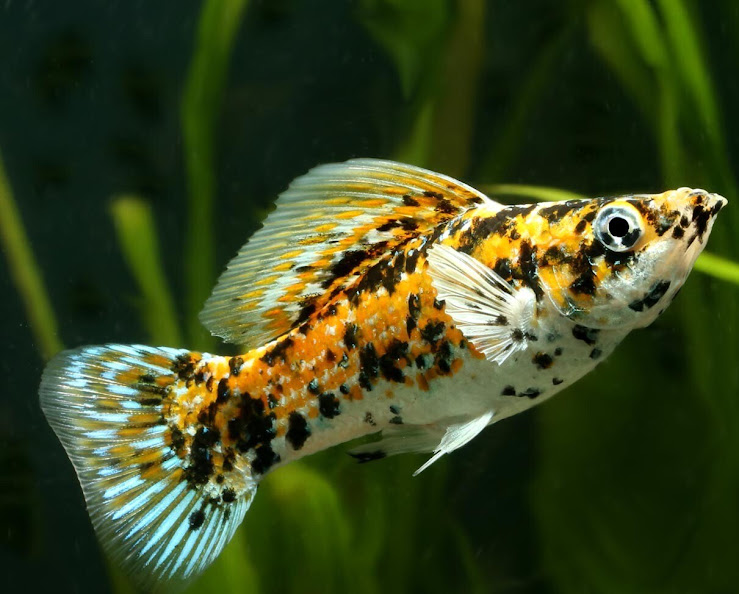 I got a Creamsickle Dalmatian Lyretail Sailfin Male Molly, mine being a Lyretail, has a different shaped Tail, but looks the same Coloration as this Image. 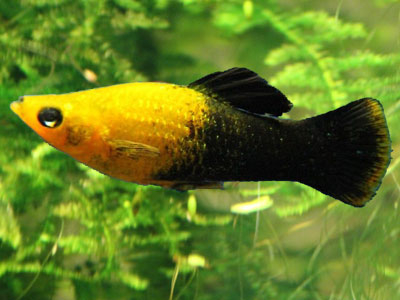 And I got a Gold Doubloon Male Molly who looks very much like this Image, only mine is a much bigger Male.   I cribbed these Three Images so you'd get the best idea of what I bought... since Photographing Tropical Fish takes more Finesse and a better quality Camera than I possess!  *LOL* 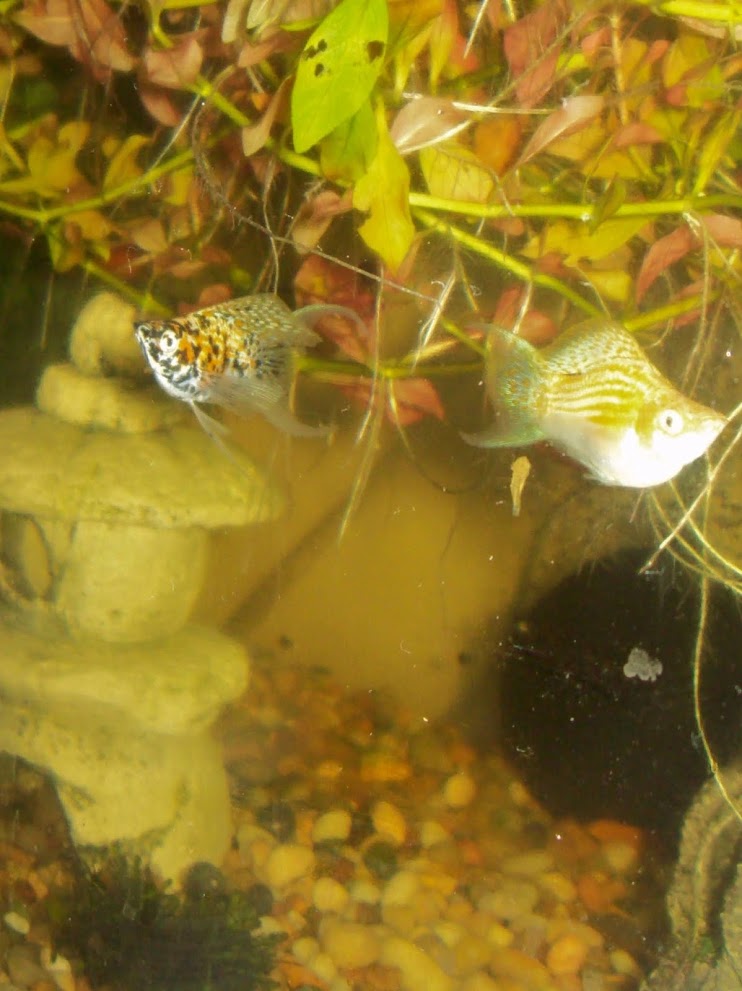 But, I did try and Two of the New Boys cooperated, tho' the Color on the one on the Right is more Orange and my Tank actually doesn't look this horrible and murky either.  I can't seem to show how nice the Tank looks nor get a stable shot of my Fish, so you have to take my word for it.  *LOL*   I am gonna now trim my Aquatic Plants, they've suddenly gone berserk, but the Fish seem to Love them being lush.  Everyone else I know with Tropical Fish Tanks say they can't get the Aquatic Plants or the Fish to thrive, mine go Bananas.  The biggest problem I'm finding during Pandemic is a lack of Fish the Pet Shops can procure and the Health of the ones they get is sometimes Poor. 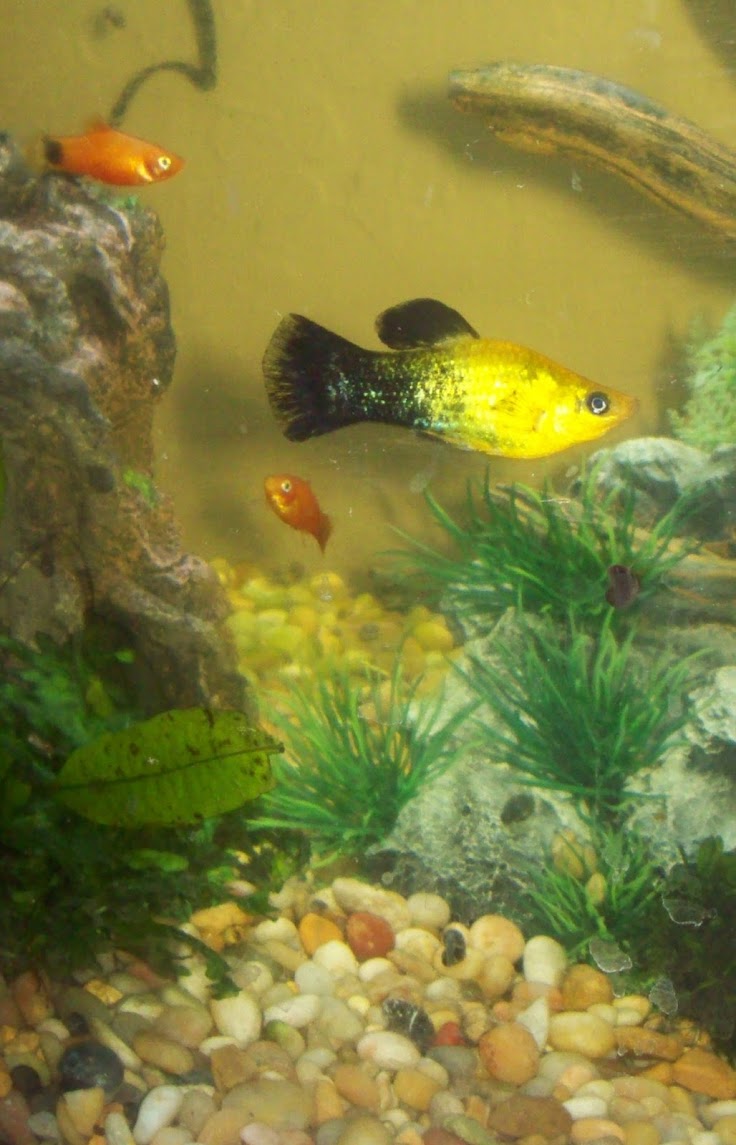 After thinning out my Aquatic Plants in the larger Tank I was finally able to get a clear shot of my new Gold Doubloon Male.  I'm quite proud of how nice this Pix turned out and the Aquarium doesn't look so murky now that better lighting comes thru the thinned out Plants.  I put the trimmed Plants in the Nursery Tank, which presently doesn't have any Fry in it, but they will like to hide in a lot of Plants even if no Adults are in the Tank with them.  I left enough Plants in the large Aquarium for Newborn Fry to hide in and not be so vulnerable until they can be transferred to the Nursery Tank.  Right now we have no Newborns. 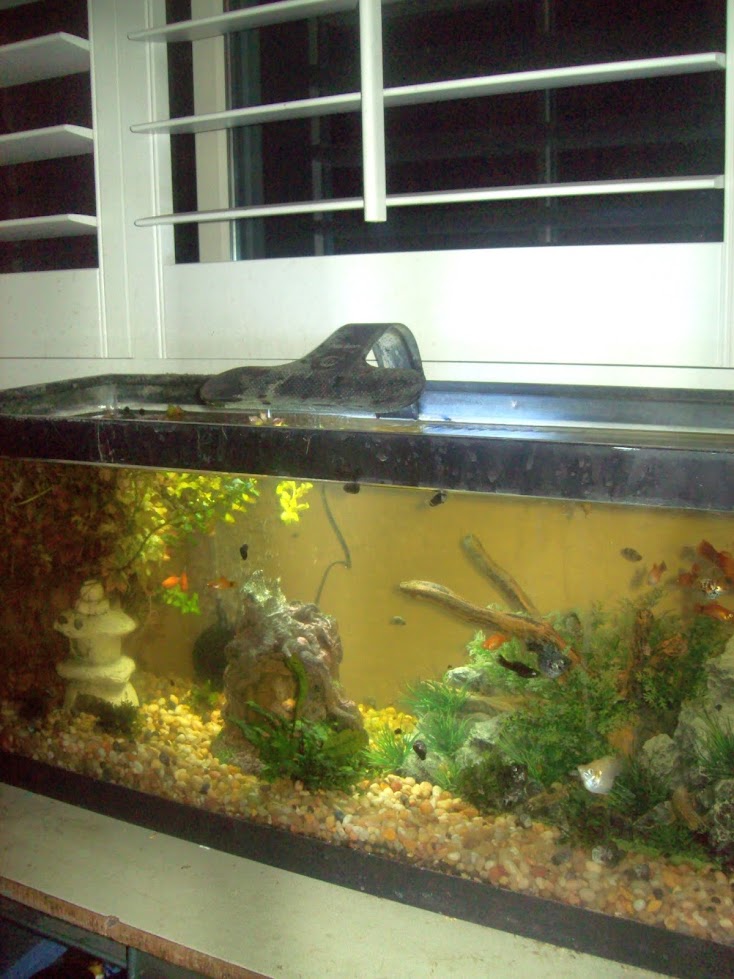 The thinned out Aquatic Plants makes the Aquarium look way better and gives more room for the Fish to be viewed.  It had looked like an overgrown Jungle in there.    Tho' the Juveniles tend to still hide in the Plants, even tho' they are way too big to be eaten by the Adults now, it makes them feel more Secure.  The Glass is dirty so I've got to find a way to clean it without using products that have toxins... I'm thinking just water on a Mister Clean Magic Eraser might work best?  I'm thinking if I get a Scenic backdrop the Taupe Wall behind the Tank won't make the Water look so Yellow in Photos?  In person it looks just fine. 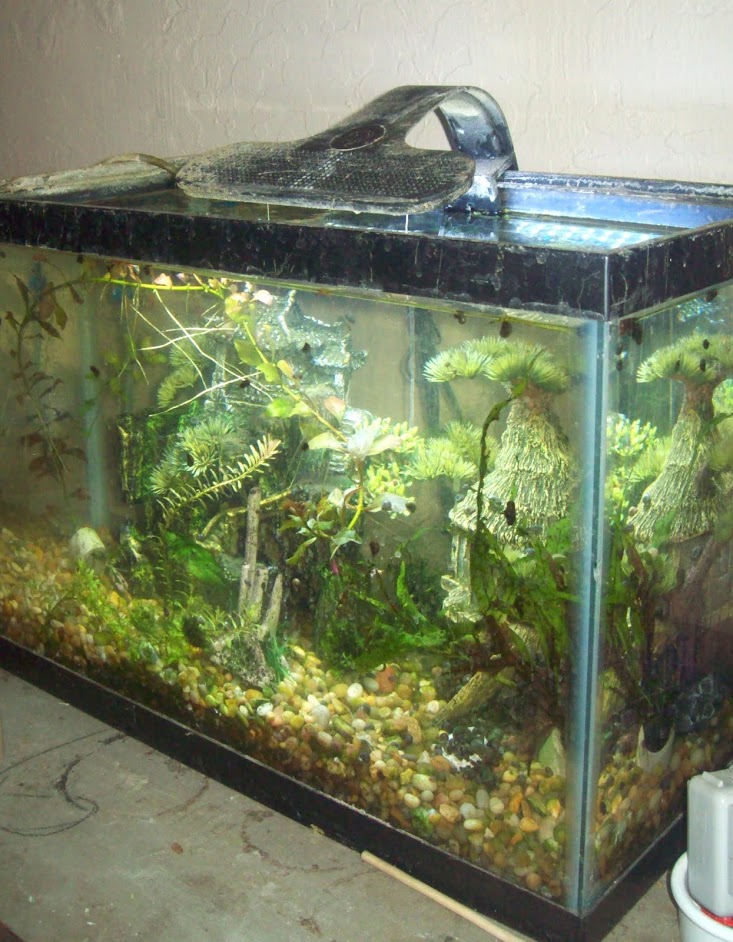 The Nursery Tank, which is Smaller, is also Cheerier, because the one LED Light on a Smaller Space just looks better.   All that's in here right now are Snails, which have congregated on a Vacation Feeding Block, which is how I feed them when no Fish are in the Tank to feed regularly. 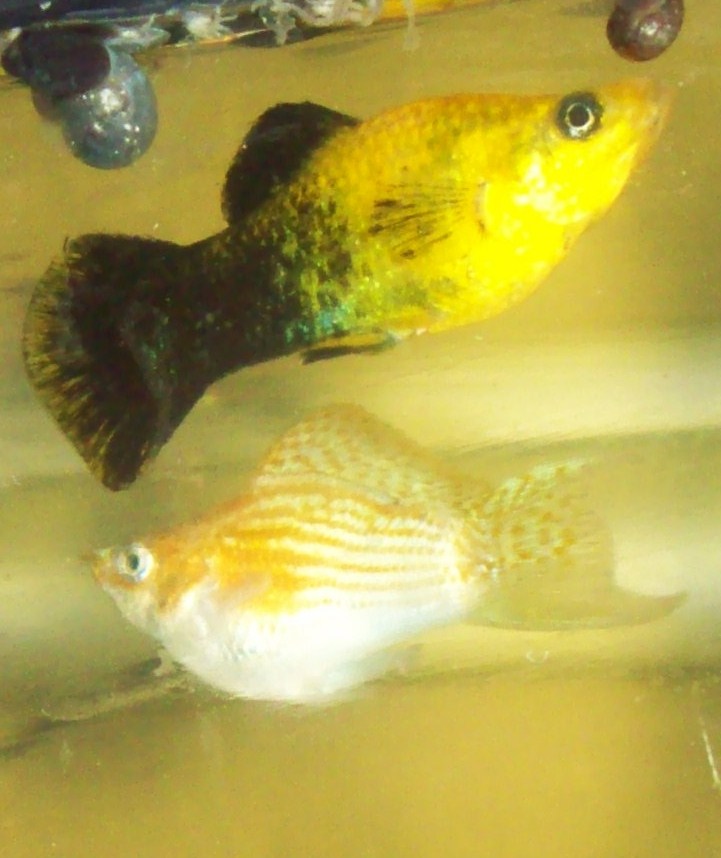 Suddenly, Two of the New Boys got more Curious about me with the Camera... what IS the Human doing?  *Winks*   The one on the bottom has gone Paler than he was in the Pet Shop because he's in a new environment, he had very bold Coloration which should come back once he's feeling more acclimated.  He actually has some Iridescent Blue and a brighter Orange when he's in Full Color and he makes his Sail Fin and Tail Fin Big and Fans them out, to impress the Girls.  *Smiles* 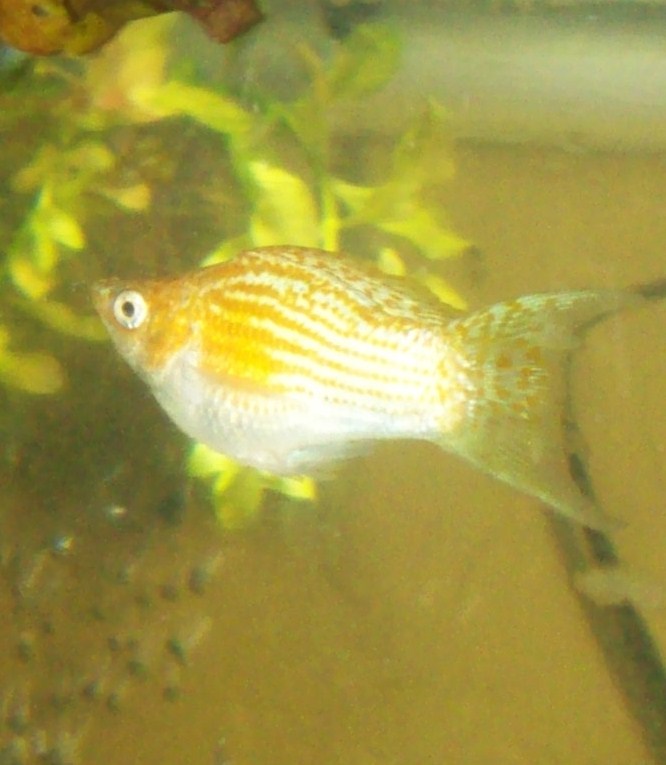 He already seems to like to Show Off some... it's Funny, but a very Fine Fish knows it's a very Fine Fish and shows some Fish Swag!  *LOL*   All Three of the New Boys have Swagger, which is why I chose them, because if the Females aren't Impressed by The Boys... they will fend them off and ignore them. 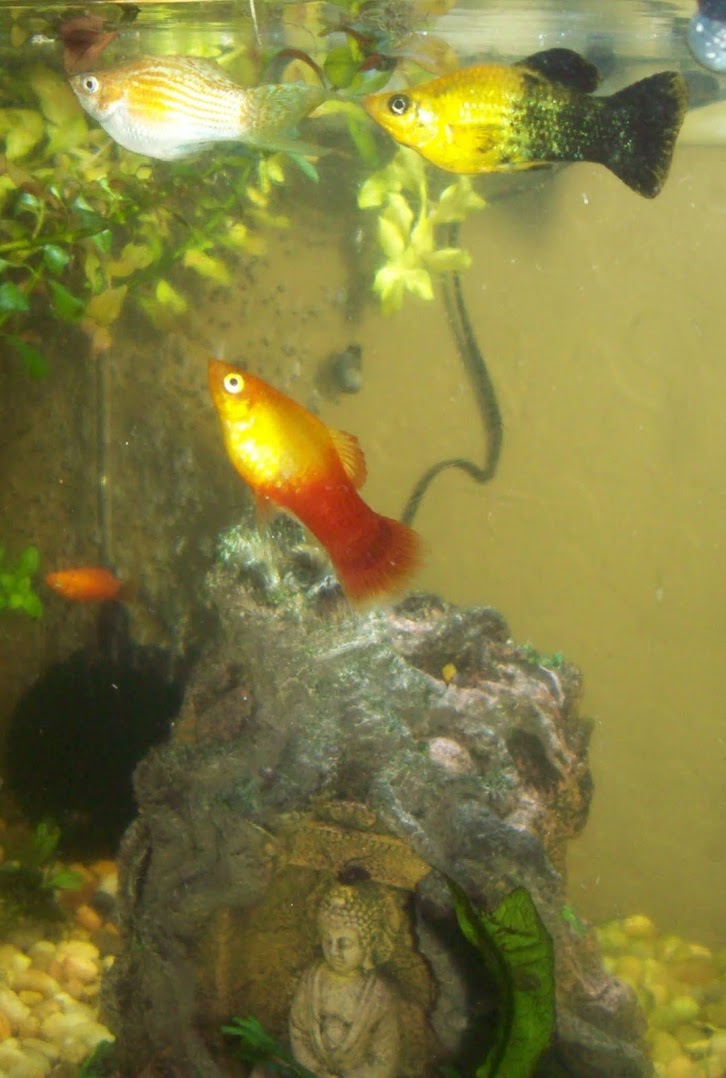 My Sunset Platy Male must have felt Neglected so he pushed his way to the forefront to be Photographed too.  That Fish has always has Swagger, he's Handsome and has also Fathered almost all of the Juvenile Platys I have in the Tank.  But the Aging Breeding Age Adult Females finally Died Off, so he's got to wait a while now to have Adult Girlfriends of Breeding Age.  He was so prolific a Breeder that I haven't bought him an Adult Girlfriend or I'd be overrun with Platys!  *LOL* 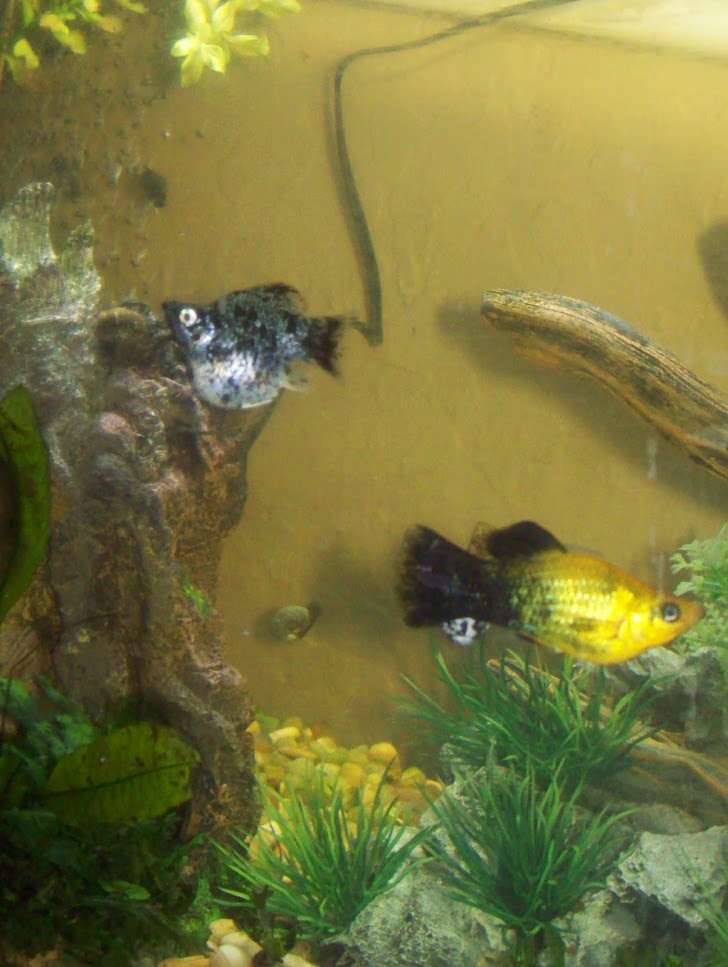 See, you didn't know you'd come here Today and Read about Fish Sex on a Boring Pandemic Evening, now did you?   Or, mebbe the Title Hook made you Curious enough, so you thought you would take a gander and see what Fish Sex Talk we'd be discussing???!! *LOL*   My Balloon Belly Dalmatian Molly has looked this Preggy for Months now, so has the Albino Balloon Belly Female Molly... they both look ready to burst!   They are primarily who I got the Adult Male Mollies for Today.   Both Females are Beautiful Fish and I'd really miss an opportunity to have pretty Newborn Mollies if I didn't try to Breed them. 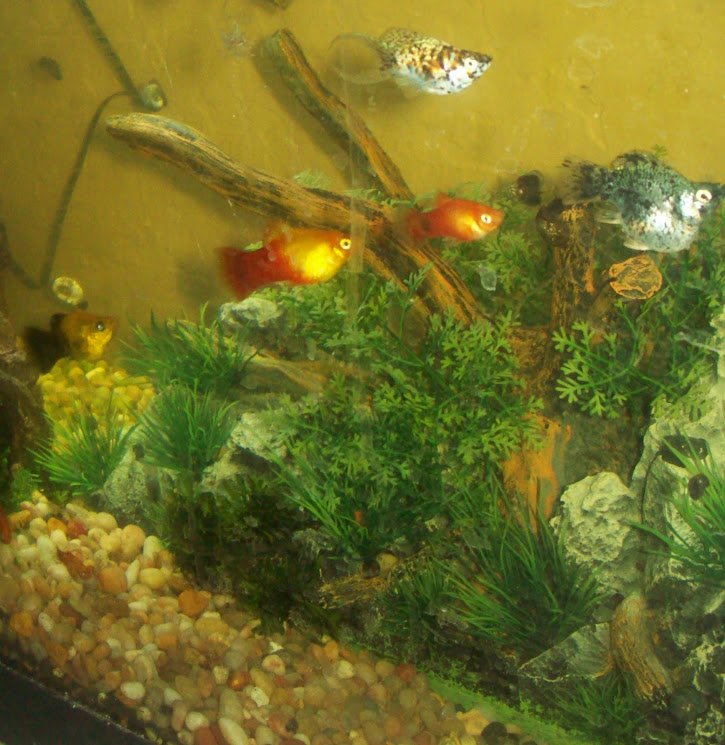 All the New Fish have seemed to quickly Bond with all of my Community Tank Fish, so that's a good Sign.   None seem overly aggressive or unable to get along and Play well with others.   That sometimes happens when new Fish take up Residence and Territorial spats break out, especially in mixed company where the Males vie for the Harem.  They will pick their favorite Females to try to get the Attention of and completely ignore others.   I'm sure that's all the Fish Talk you can handle in one Evening?  *LMAO* 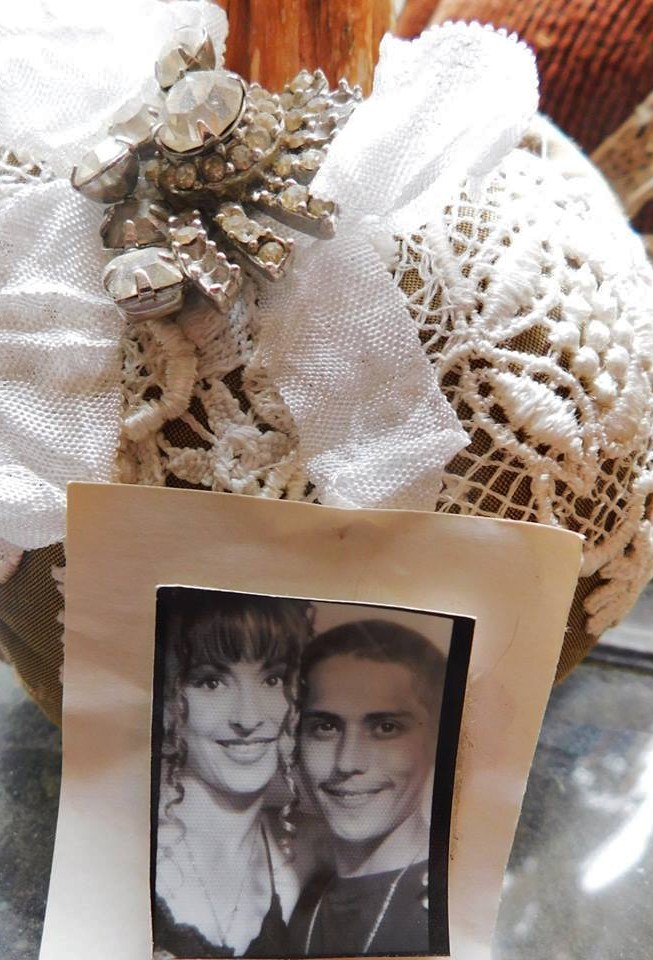 I've now put all the Fish to Bed, it was Soothing watching them.  Which I needed, since I've had a terrible Sinus Headache all Day, because the Wind has blown a lot of Pollen, Dust and Muck around, it's been a Pleasant yet Blustery Day.  Princess T has had bad Allergies all Day too and said if you Cough or Sneeze in Public now, people give you the Side Eye like they think you have The Rona.  *LOL*  That's so True, The Man has serious COPD and Respiratory Issues all of the time so he often Wheezes or has Coughing Fits and now if we're out and he has one, people start moving away and giving you Hard Looks.   I understand, everyone is terrified of getting it... but not every Symptom is indicative of having the Plague or even being contagious. 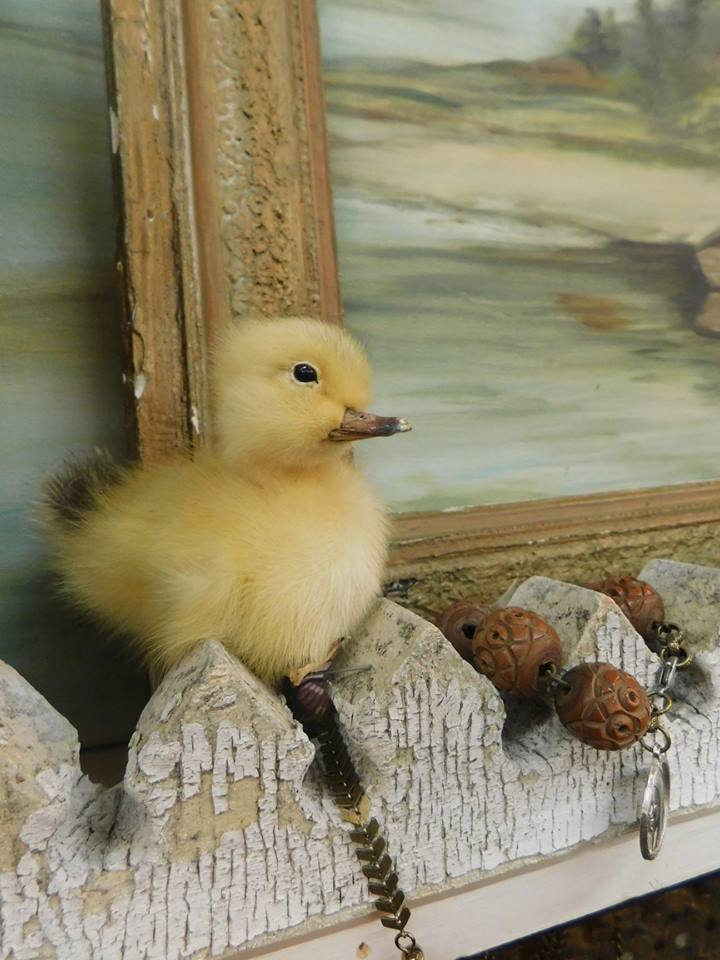 Stay Safe and Be Well my Friends... Dawn... The Bohemian