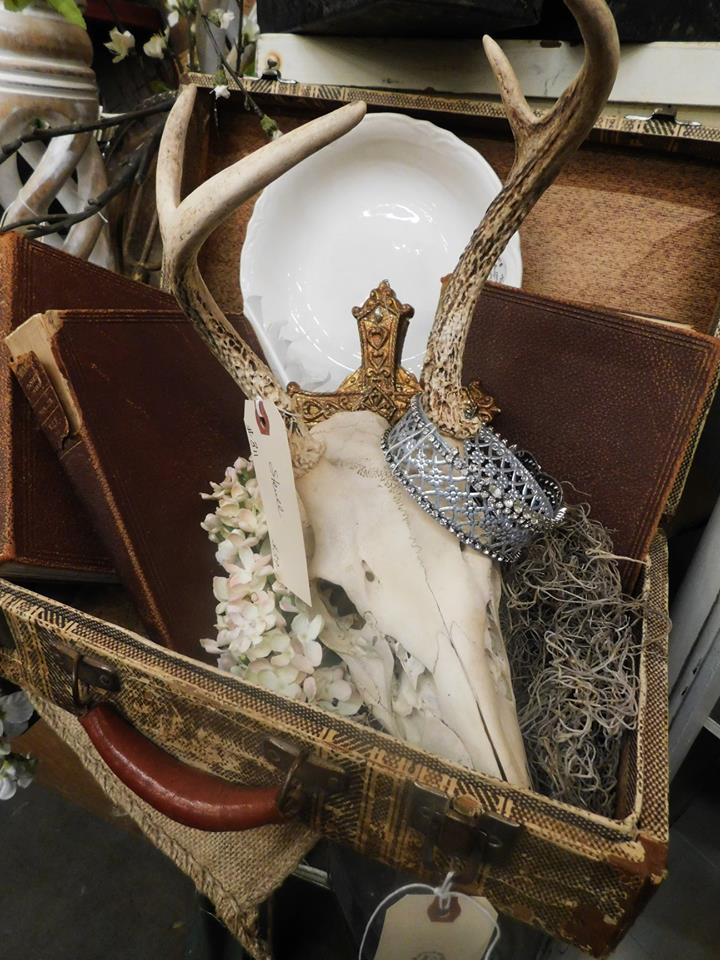 Day Two of tackling The RV Garage Gauntlet and continuance of Downsizing went well again.  We got a later start due to Princess T's first day of In-Person Classes, which went well.   Since she'd only be there Two Hours we spent the time getting Errands done during that time frame she'd be in School.   The Son tackled The Gauntlet while we were Errand Running plus dropping her off at School at Noon, then picking her up at 2:00 pm. 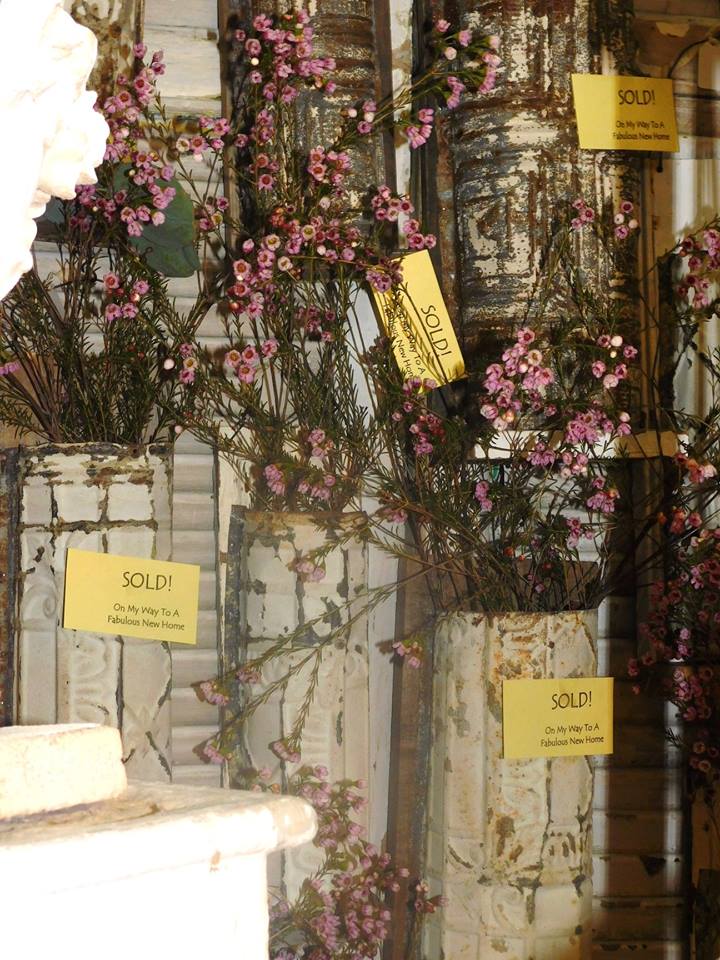 She said only one other Kid scheduled for her Class showed up, a Boy, so there were only the Two of them this First Day, plus her Teacher, who she likes and has had before for Special Ed Resources.  A shame that Parents committing to this missed the first Day, there should have been 5-7 Students total and not just 2.  If they don't get better participation, I doubt they'll receive the Funding to continue it, which will be upsetting for us Families that are Serious about it and our Kiddos desperately need it. 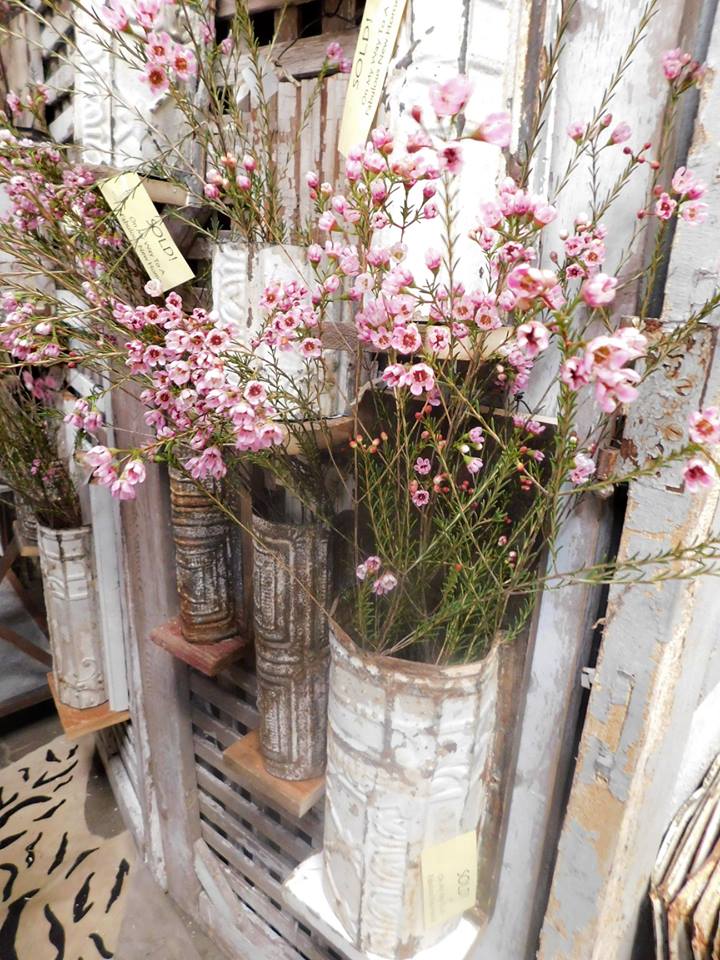 Anyway, I'm glad she enjoyed it and her Anxiety now is lessened, the Boy in her Class is Cute and held the Door open for her, Twice, she said.  *Winks*  She was all giddy when she got to the Truck and pointed him out.  Which she didn't have to, since they were the only Two that showed up, so were the only Two being picked up!   But, she wanted us to know all about him.  *LOL*  They take their Temperature going in each time and walked her to the Classrooms, she goes to Two different Classrooms for an Hour apiece. 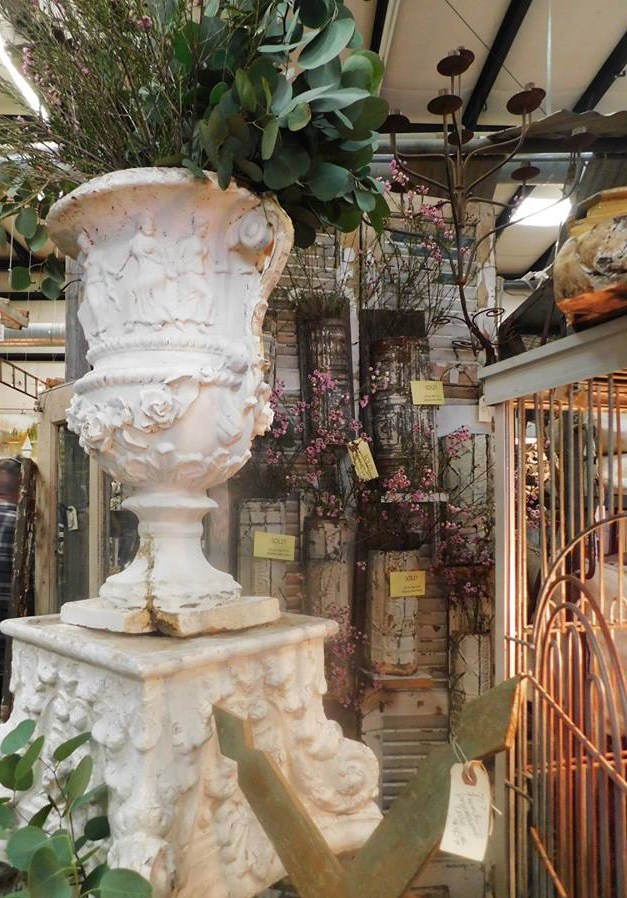 So, since Cute Boy Who Opens Doors is in her Class, I suspect she won't mind going Two Days a Week now for Four Hours total?  *Winks*   We'll see if any of the other Students shows up Tomorrow?   She couldn't wait to tell Gay Timmy all about her First Day of In-Person Classes and about Cute Boy Who Opens Doors, it's Gossip Fodder that is new for both of them and they both do Love the Gossip lemme tell ya!   Pandemic has made Teen Life very mundane otherwise.  *LMAO* 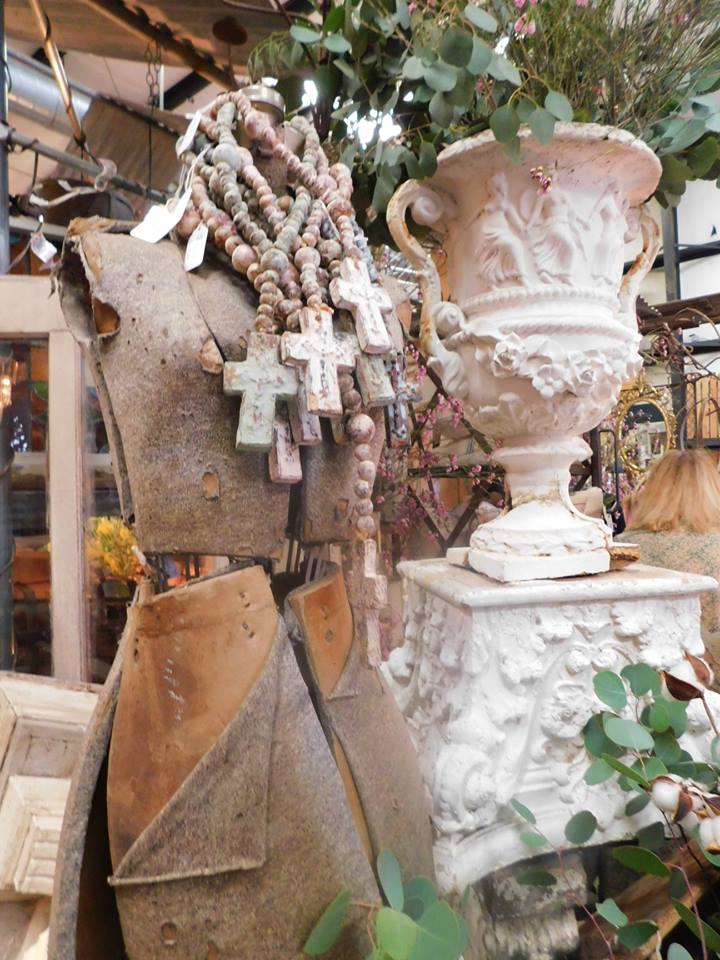 So, while she was in School, The Man and I dropped off some more Boxed Donations, dropped off some more Priced Inventory at the Antique Mall, and did the Grocery Shopping for Essentials we were out of.   Everyone has things stocked pretty good now, but had limits on some items, so we had to go to Two different Grocers to get all we wanted to stock up on.   At least now Coke Zero can be found again at about half the places I shop at, to me it's one of The Essentials.  And, it's limited to Three purchases of it per Customer, thus Two Store Stops.  *Bwahahahaha!* 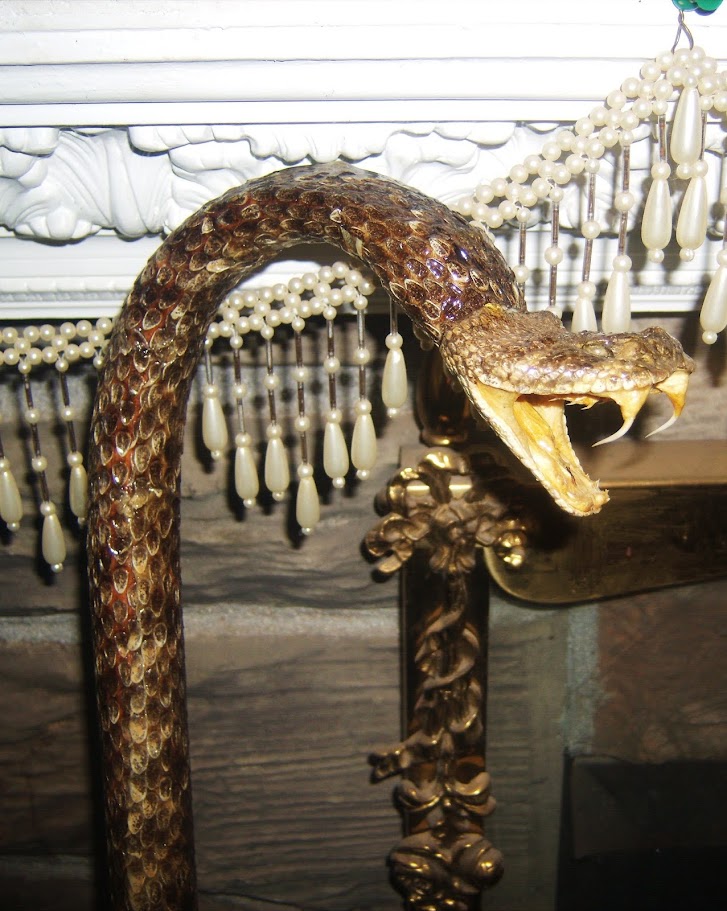 There were no limits on The Man's Lipton's Peach Iced Tea, so we got as much of that as we wanted to stockpile, so we won't have to make as many Death Runs to do Grocery Shopping.   This is why I stock up on things we use a lot of, so that we have a Cache' here at the house and I can avoid numerous Death Runs per Month.   Tho', I must say, both Grocery Stores really were sparse of Shoppers, so I've also figured out the Days of the Week and Times when most people aren't there Shopping, which is helpful, saves Time and feels Safer.   I had a Special Request from my Blog Friend Shirley over at "Boots And Braids" Blog, that when I found a pix of The Man's Rattlesnake Cane, to Share pixs here in The Land of Blog... so here it is Shirley! 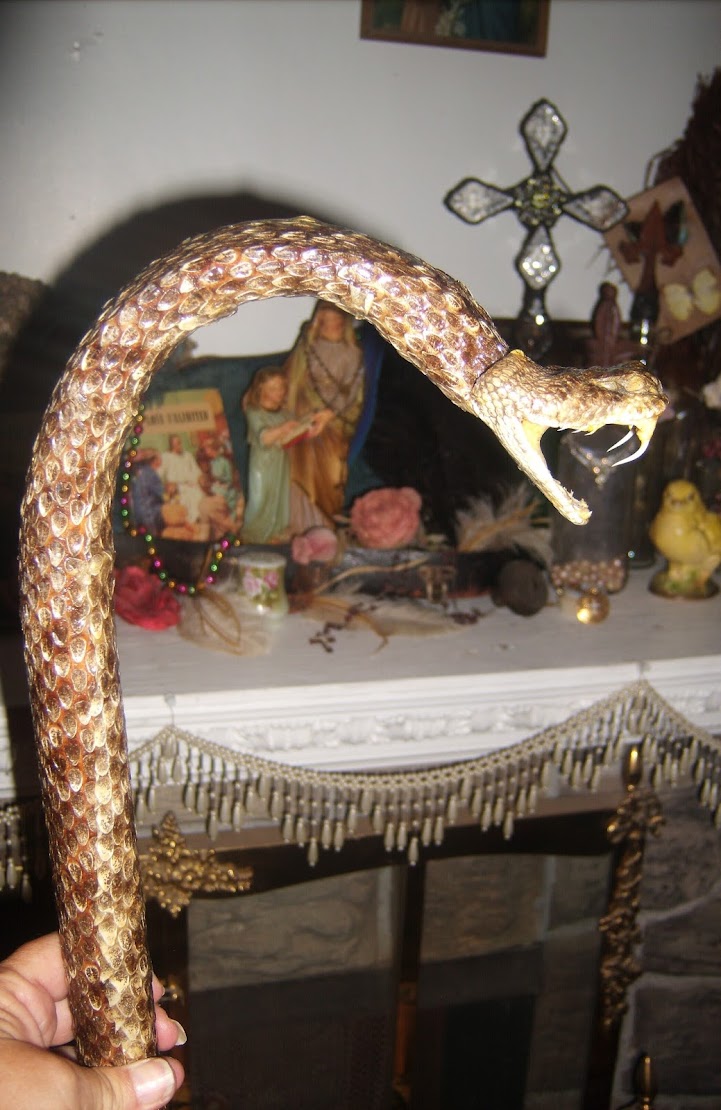 Now, it no longer has Fangs, we've replaced the Fangs perhaps 3 different times and who knew Rattlesnake Fangs are so Fragile and break off so easily?   He kept dropping the damned thing which is why the Fangs kept breaking off, his Motor Skills in 2012 were worse than they are now.  It's probably Safer not to have the Fangs in and he rarely uses it anymore now anyway.  He was very Proud of it when I first bought it for him and would take it everywhere, since it was a Conversation Starter and did Scare a lot of people, especially Kids!  *LOL*  It really is a Curiosity and it's a very large Snake that it was made from. 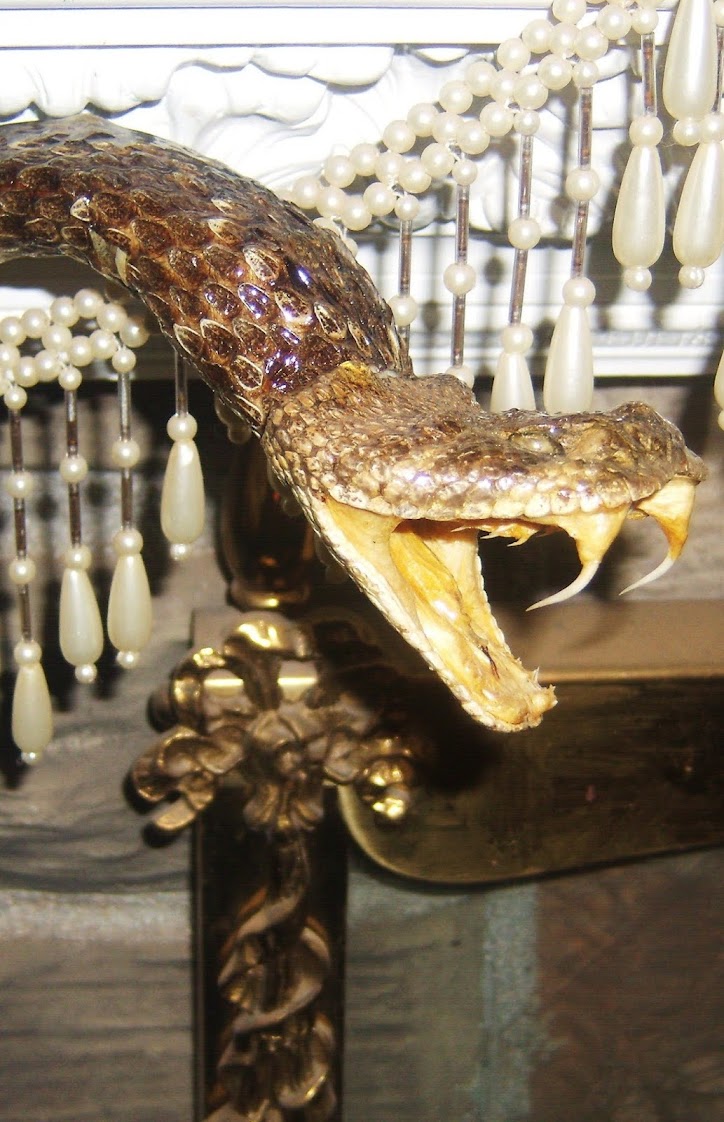 Now to get him to use any Cane, no matter how Cool it is, is an exercise in Futility, so I quit buying him Fancy Cool Canes to entice him to use them with any consistency.  His Motor Skills improved some and so he doesn't need a Walker, Canes, Scooters or a Wheelchair as much as he used to need them.  In fact, now I make him walk a lot to keep improving his strength and Motor Skills and we assist him when he's getting up or going up and down anything so he doesn't risk falling.   He used to fall a lot, so I know his Balance has greatly improved.   When you're a Caregiver of someone whose very stubborn about using their medical equipment, you have to do a lot of rehabilitation with them instead. 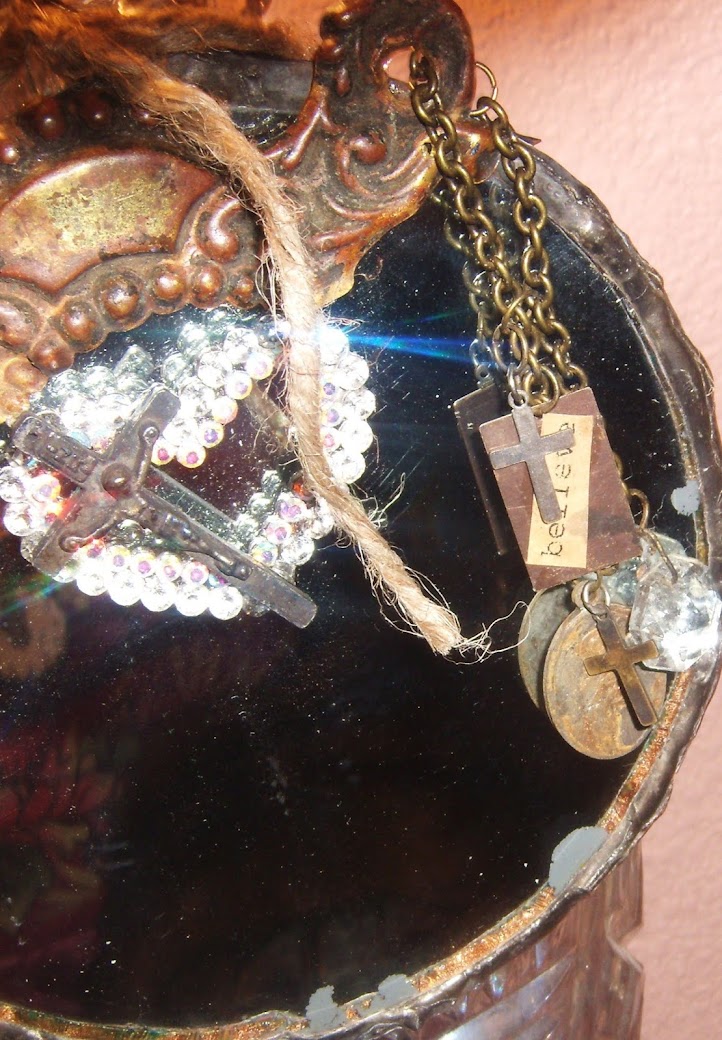 Anyway, after we picked her up from School we joined The Son in The Gauntlet Project and stuck with it until Dark.   The Son and The Man were having so much Fun taking Trips down Memory Lane with the Photo Album Purge that they actually stuck with it much longer than I did in my unpacking of more Crates.  But I did get 7 Old Milk Crates unpacked this Day and my work was more physical, theirs more time consuming.  The Son is now picking out pixs he'd like to have of all of those we're Purging from the various Albums.  He's finally at an Age to want some of our Family Photos and I'm ready to give them to any Adult Child who wants them. 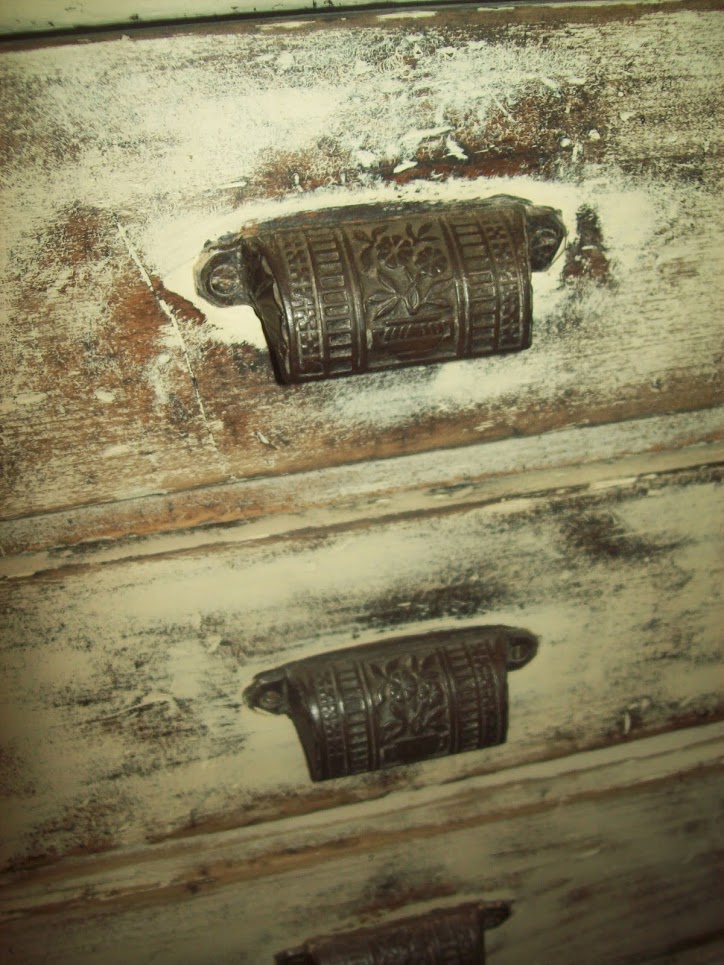 Princess T is also picking out pixs of her Mama and Daddy, to hang in her Room, which is Sweet.  She has no actual Memory of either of them since we haven't been to Mexico since she was only Two... and when they Call her it's still awkward for her, since she doesn't really 'know' them and doesn't know what to say.  Her Dad's English isn't as good as it used to be when he was in America and speaking it all of the time... and none of her Siblings in Mexico really speaks or understands English, nor her Abuelita, Saint Maria, the Paternal Grandmother. 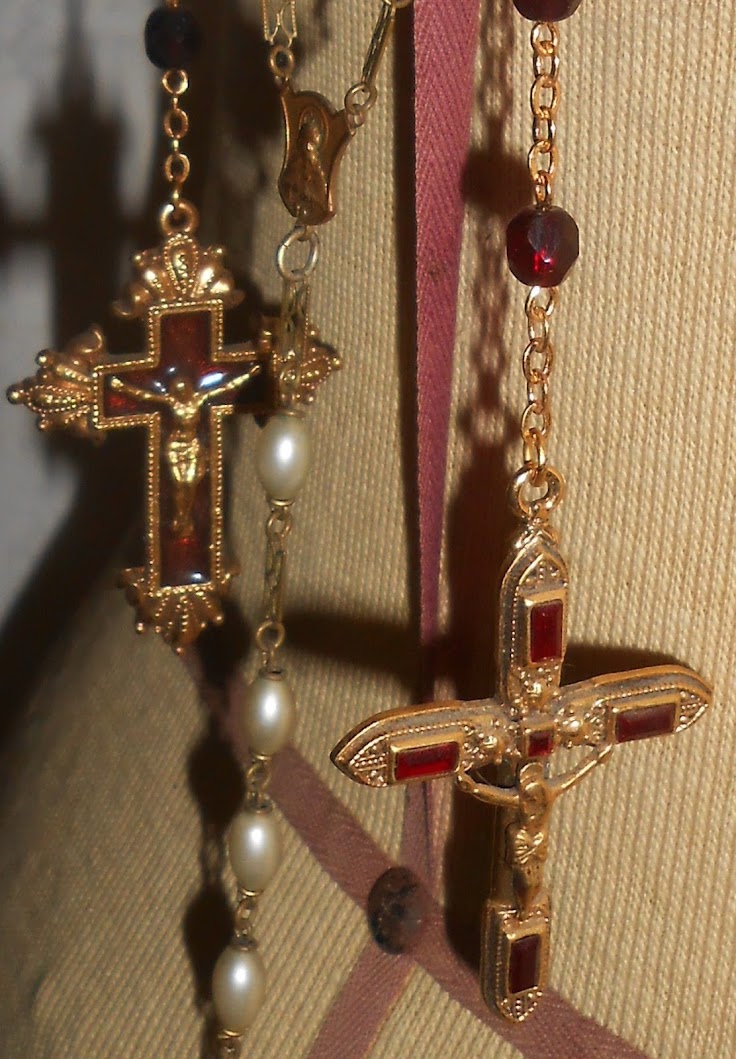 Our Daughter is Bilingual, but sometimes even forgets some English, since she speaks Spanish all the time there... and English, not as much for the past Decade Plus.   We Laugh about that, but I completely understand, both times I worked The Census and had to speak Spanish part of the time, I'd end up with this weird accent when I'd switch back to English, which was hilarious.  Now that I haven't had need to speak Spanish anymore, I've forgotten how to speak most of it and only understand partially anymore... if you don't use it, you lose it.   Believe it or not, when I was a Child, my Parents said I spoke Five Languages fluently... now English is about it for fluency!  *LOL* 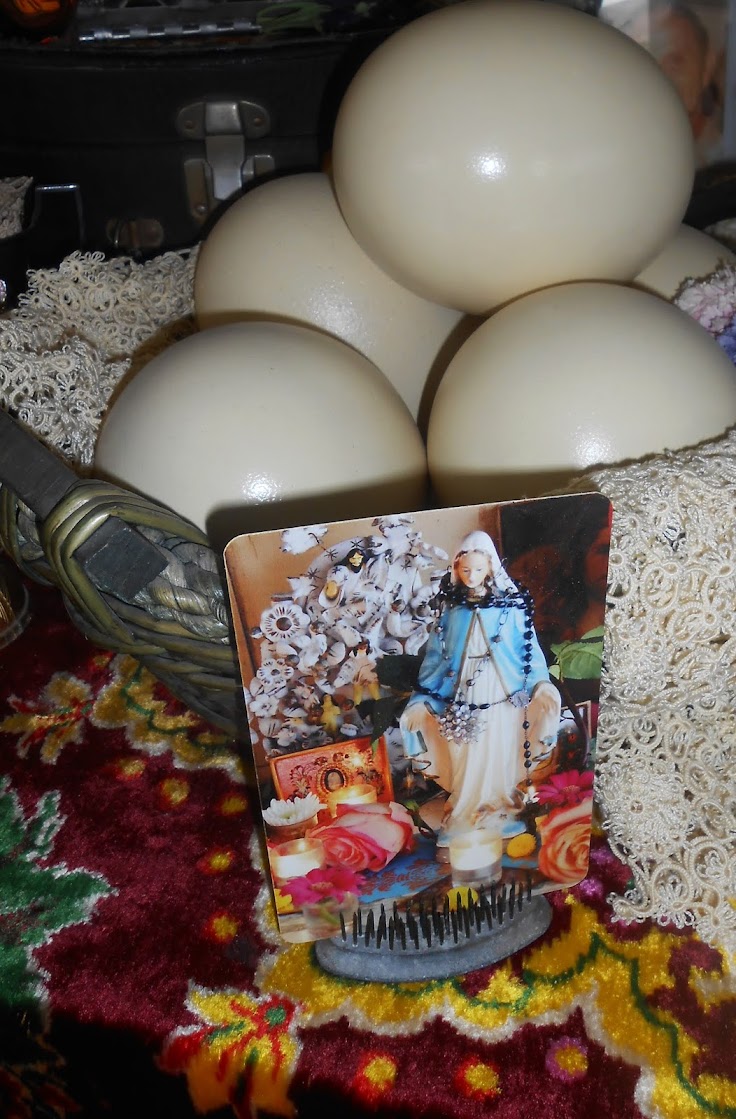 My Mom was Bilingual her whole Life since English wasn't her First Language, and in her Older Age she was Teaching herself Spanish by watching the Spanish Language Stations.   Her best Friends were originally from Jordan and spoke Arabic around her so much she could understand it, she just couldn't speak it very well.  She picked up Languages easily and I suppose she could easily have been a Linguist had she wanted to be.   Her Jordanian Friends were Tri-Lingual since they fluently spoke English, Arabic and also Spanish, so they could talk to their Spanish Speaking Customers in the businesses they owned here. Anyway, The Man stuck with it until 8:00 pm Tonight, whereas at Sundown I called it a Day.   The Son came in just before his Dad to fix some Dinner, I'd taken The Man out for Dinner to 'Claim Jumpers', it's nice having The Son here since he'll stick around to ensure his Niece doesn't have to stay Home alone when his Dad and I want or need to do something by ourselves.   Most of the time she's got things to do too, but she likes having her Uncle here when we're not here and when Gay Timmy can't be here with her to keep her company.   Today the Kiddos were burnt out on Purging Photo Albums, but they'd put in quite a bit of time Yesterday and I didn't expect Teens to slog away at it as long as us Adults can. 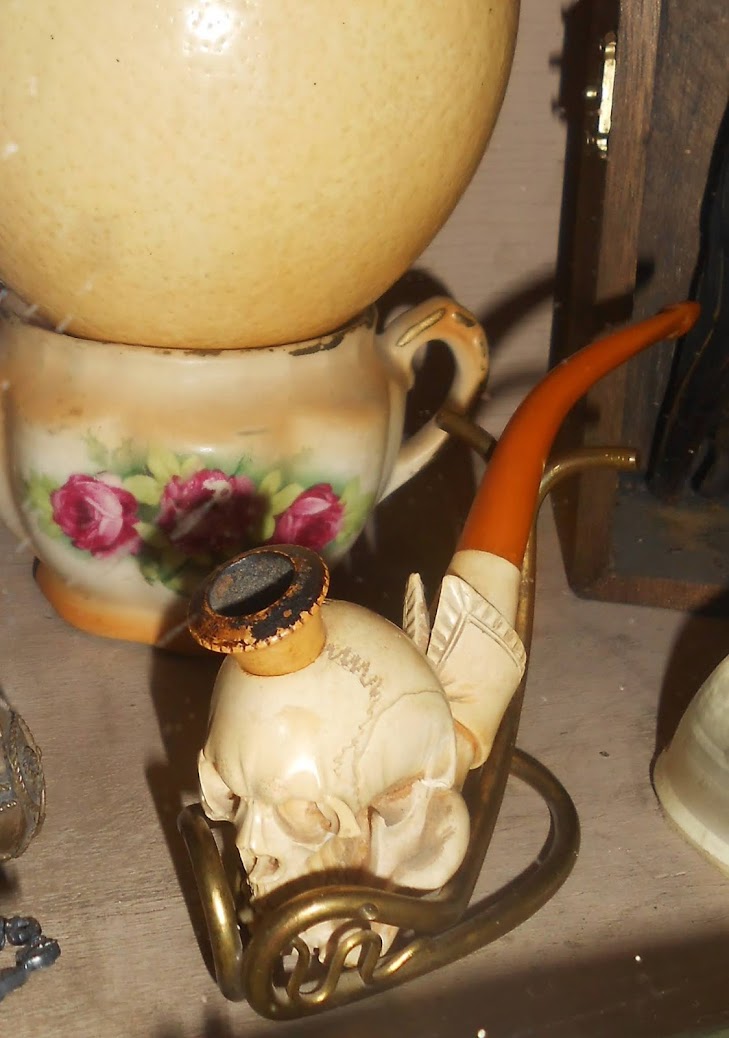