The Lock Down Journals 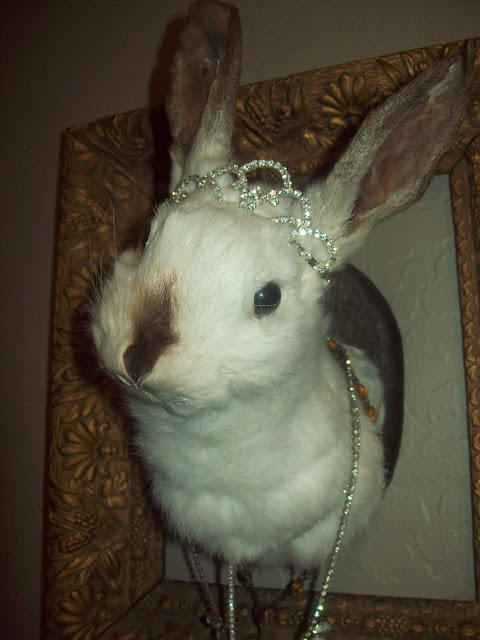 One of our Dear New Neighbors has been bringing over a Hot Meal every so often to Share with us, knowing we're a Medically Fragile Family that shouldn't risk going out much, they worry over us already and Check on us, Bless them.  It's Thoughtful and so Helpful, since I'm no Culinary Jedi and there's nothing quite like a Home Cooked Meal someone prepared with Love for you and Surprises you with!  The Gift of Hospitality, even with a 6 Foot Distancing precaution not extending beyond on the Doorstep, is still Hospitality that can be Cautiously extended between Neighbors, Friends and Family. As they bring items over to leave for you, so you don't have to go out and Shop as often... or perhaps for some Families suffering Economic Hardship and don't have adequate Resources for necessities due to being out of Work! 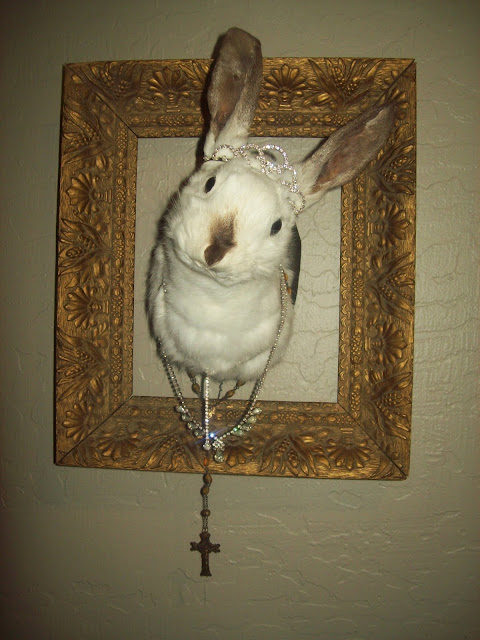 The other day it was a delish 7-Bean Soup and a Loaf of Home-Made Bread!  Nom-Nom, I got a small Bowl and Slice of it and The Man Bogarted the rest!  Princess T has such Anxiety Issues about Germs in general now, that she doesn't want anything Cooked by someone she doesn't know Well and she can't see being prepared.  So when they Shared a Lovely Home-Made Spaghetti Sauce, she opted for a Gourmet Jarred Sauce instead on her Angel Hair Pasta that I'd procured from 'Sprouts'.  She thought she was flattering me by saying she liked MY Sauce best... even tho' it came out of a Jar!  *LMAO*  I am concerned that Emotionally this is taking a huge toll on our Children, she Sleeps way too much, is very lethargic and morose, Kids don't always recognize or acknowledge the Signs of Depression and Extreme Stress. 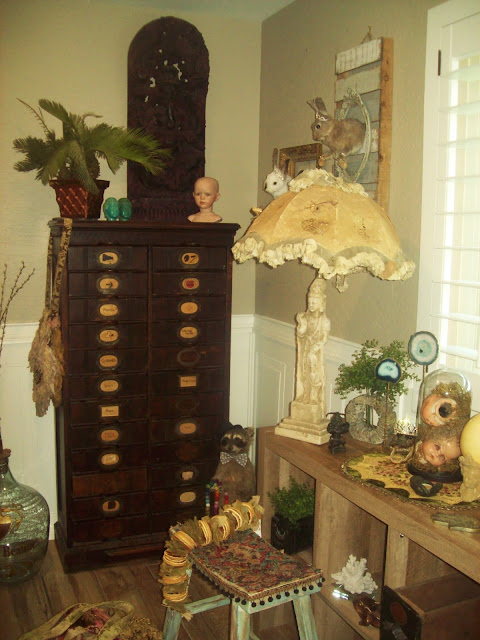 Initially she wanted to do things with us here at Home or go for the small drives with us just to get them out of the House for a little while, now she Opts Out of anything and everything.  Her behavior is exemplary, so that's not problematic, she's not Acting Out so much as she seems to be Shutting Down so I'm keeping an Eye on that.  Since Teen Years are vulnerable Years on the Emotions anyway as they morph from Children into Young Adults and find their Place in Life.  I know the Social Isolation of not getting In Person Face Time has been difficult, she had that tight Inner Circle she'd only just established after Moving here in February.  Not to mention no Play Dates with Friends from our previous Neighborhood can happen right now either.  For a Kid this can seem like Solitary Confinement being cooped up with just of Adults, be it Custodial Grandparent(s) or Parent(s).  She still Worries about us catching the Virus and Dying. 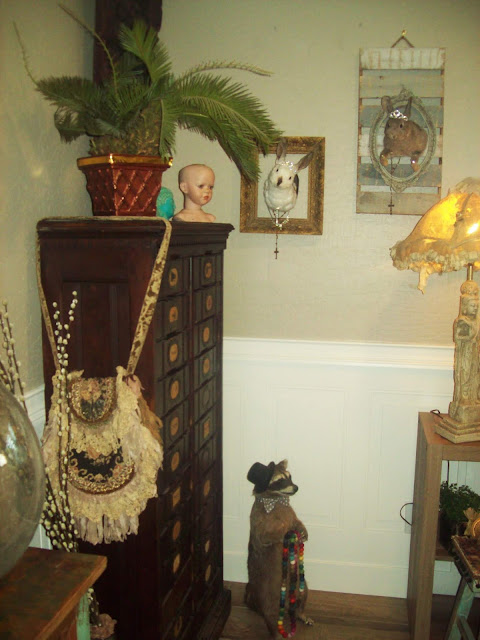 With almost losing her Grandpa to his Catastrophic Accident 7 Years Ago, it's still fresh in her Mind how Fragile and uncertain Life can be, especially for Old People.  When I took my Senior Fall recently, while in Lock Down Mode, she really Freaked Out and was Alarmed about it... telling me to be more Careful! Not understanding fully that I wasn't doing anything risky at the time, I just toppled over as a Knee apparently gave out while simply Walking!  Actually, that might have even made her MORE Alarmed, since she hadn't previously viewed ME as a Vulnerable Adult like Grandpa... and shit... now she's got TWO of them!  I'm trying not to seem feeble or vulnerable, tho' with a Pandemic and knowing I'm in a high risk category and nobody is immune, it's difficult not to secretly feel particularly more vulnerable at this time and consider your own Mortality! 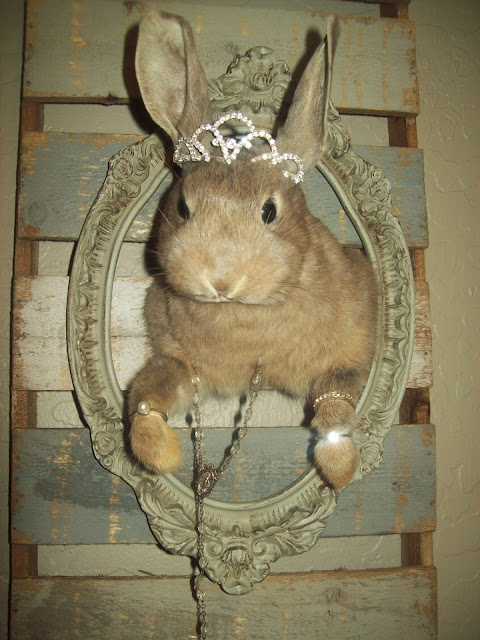 I did hang up some Taxidermy Today and as you can see by Today's Imagery, the Bun-Buns are now hanging on the Dining Area Wall.  In my Head I've also adjusted where I'm going to hang my Farmhouse Brick Wall Paper, to a different Space than originally Planned.  Why?  Because the New Location would be far easier and I'm ALL about ease and Convenience right now.  No Furniture to move out of the way, less pitch to the Wall, no cutting around Doorway and lots of Outlets and Switches.   Yep, the Wall that faces the Entrance is high and will Showcase a faux Brick Look even better than the initial spot I chose and then aborted the Plans of Wallpapering.  It's a Peel N Stick Paper that can be Peeled back Off if you need to Place it differently, but I'm still a bit intimidated with the hanging of it without my Friend helping who already hung some in her New Home. 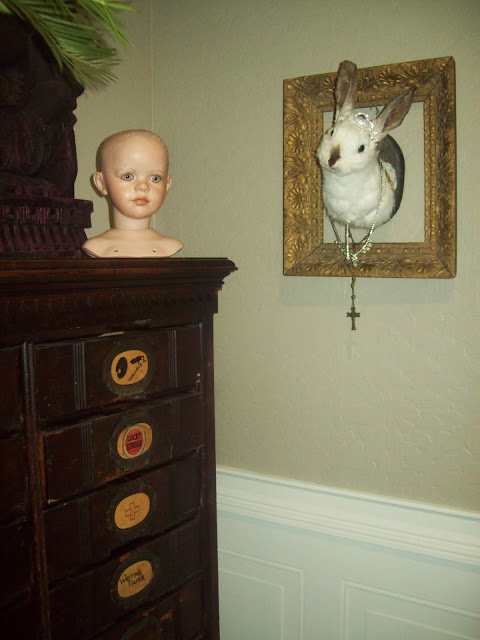 She had volunteered to hang it before the Pandemic hit and now I Wish I'd taken her up on it then.  *Le Sigh*  But we had so much going on, both of us, that the Timing wasn't seen as the Idyllic opportunity to do it.  She hasn't fully finished Remodeling her own Newly bought Home, so I didn't want her feeling Obligated to make mine a Priority.   Now that we're in Lock Down, perhaps she and I will get a lot of shit done now that we'd previously procrastinated on doing?  *LOL*  Just, no more Senior Acrobatics that might put us in the ER, that would be awful Timing!  It's not as if she or I is falling down all of the time, we're both spry for our Ages, but we have had Senior Falls and Injuries resulting from them, so we have to embrace it's now become a possibility. 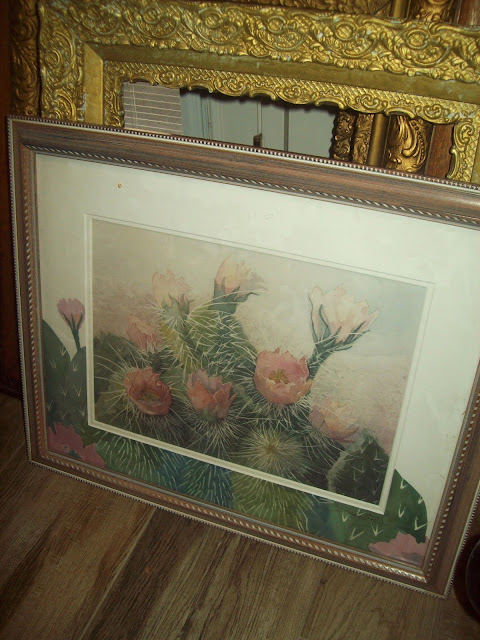 The Man and I did a quick Run to our Antique Mall Dumpster, while they're Closed, to put the Recyclable Cardboard in from the unpacking Marathon we're on.  The Manager was there and we got to spend some time talking to him and discussing the Pandemic and Challenges it poses upon the Industry.  They are taking the time doing more Housekeeping so the Mall will look fantastic when we re-open, whenever that will be?  A Vendor that clearly specialized in good Quality Western merchandise had Moved Out during the Closure and tossed some great items in the Dumpster, which had caused the Homeless Population to Dumpster Dive.  So the Manager had to keep running them off.  The Man spied one Signed Watercolor of Cactus that he couldn't resist Saving for us to Keep.  I wouldn't let him Dumpster Dive *Smiles*, but was Glad he Rescued this before tossing in our mass of Recycled Cardboard, Love it! 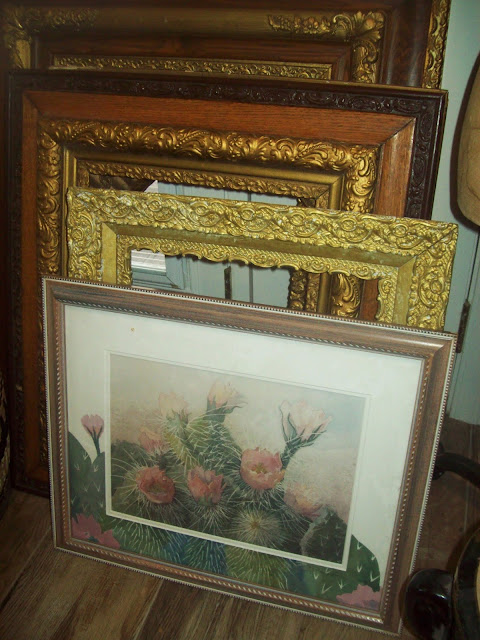 I couldn't have Imagined this being Landfill Bound and Lost Forever... it wasn't damaged, the Glass is intact and even the Mat extends the Watercolor Painting beyond the Canvas and all the way to the Frame.  The Man and I have for Years been Passionate about Rescuing Found Treasures from ending up Forever Lost or Unappreciated and Underappreciated.  This is the Style of Art that I can fully Appreciate and Display in our Home, so I have no intention of Selling it.   I'm fussy about Art and don't Keep just any... it has to resonate with me and this piece did.  I Love the Desert and Cacti with their Magnificent Blossoms are among my Favorite Plants and Unique to our Environment here in the Arizona Desert.  I fail to see Why the Vendor didn't Donate such quality items as they disposed of?  But perhaps you cannot Donate items in this Time of Pandemic and they had nowhere to Store it at Home or Offsite that would make sense during uncertain times? 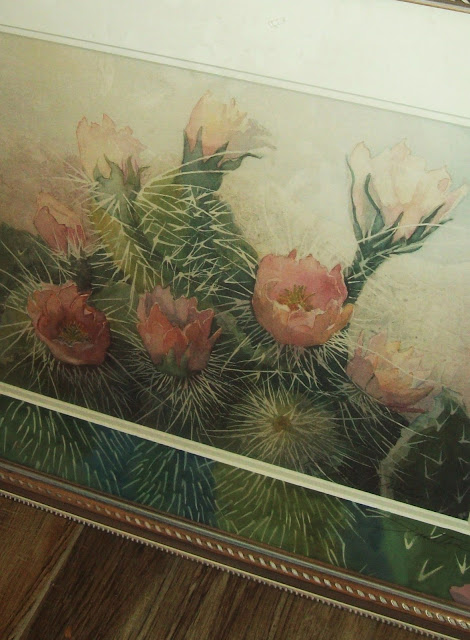 That leaves us with the unfortunate Choice to dispose of things as Garbage that have actual Value, when we have fewer Options and can't Donate, Sell it or pay Rent.  Things left behind will get pitched... I'm Hopeful that they'll continue to Suspend Rents so I can stay and keep my Showroom and Booth intact and not have to break it all down and figure out what to do with it?  Most people are saying they can't last beyond 90 Days Economically and stay Solvent.  So that is a definite Concern, since this isn't likely to regulate in 90 Days or perhaps even Peak to where we can go from Public Health and Safety being the Main Priority to Economics becoming the Main Priority.  As a Retired Bank Executive I have my druthers about the fallout being short term and not having a long term Global Economic impact.  Not that I'm Pessimistic, I'm just Realistic when it comes to Financial matters.  We really need Miracles right about now... 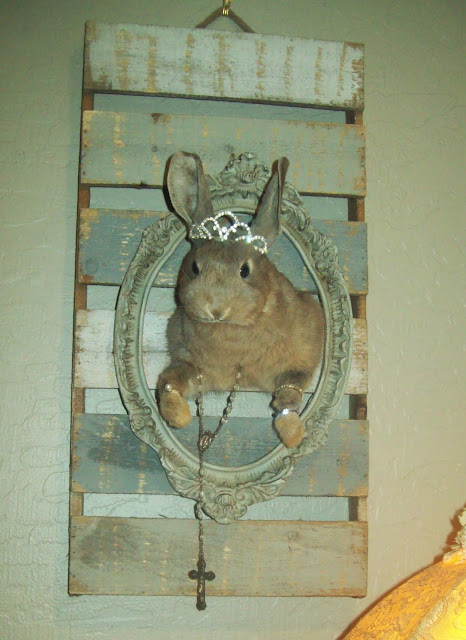 With a Balance of Hope and Caution being Contemplated Deeply while in Lock Down... Dawn... The Bohemian