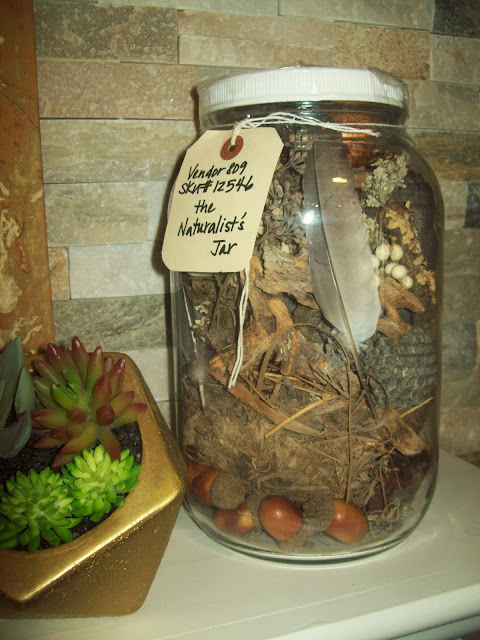 The Man and I plowed through several Dozen Boxes and unpacked them, so it was a productive day and I found several items I'd been looking for.  You know how frustrating it is not to be able to Find what you're specifically looking for after a Move?  I tend to get Fixated upon trying to locate the Boxes that hold them and Hope I Labeled the Boxes well enough and have those Boxes accessible enough.  I didn't... so it's been hit and miss whether or not I Find them and it's really dumb Luck to run across just the right Box holding them! 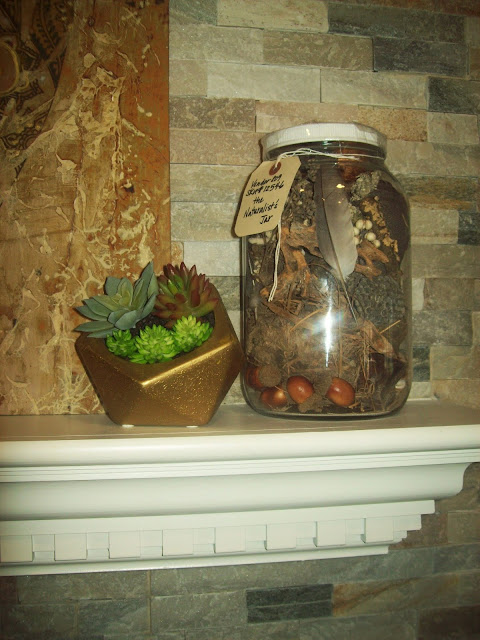 Yes, we Labeled Boxes better than we ever have during a Move this time.  But I had Friends and Family helping me, so they did their best and didn't often know what the Hell they were packing, enough to describe it accurately!  *LOL*  I had been looking for this Naturalist Jar to put on the Fireplace Mantle and locating it Today, along with some necessary Wardrobe, was a Relief!  I still haven't located the Bar that the Bookcase Ladder slides across, we've looking everywhere we can see, but there's a lot we can't see that is layered deeply in some places of the RV Garage still.  *Le Sigh* 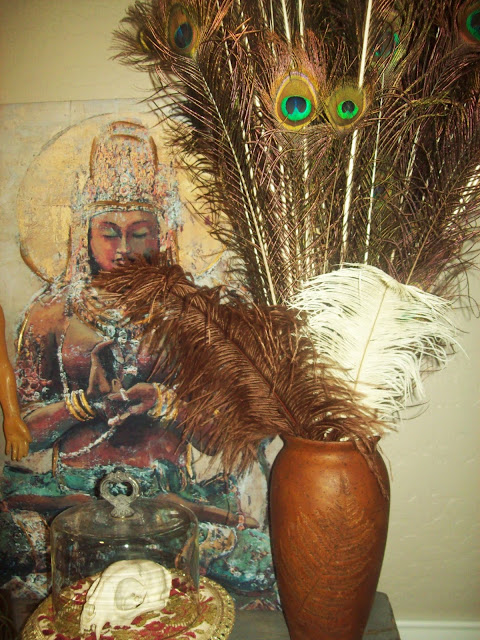 I finally located my Peacock and Ostrich Feathers... but not my Taxidermy Turtles and Large Turtle Shells.   We had attempted to sort Boxes into "Right Now" and "Later" areas, to unpack the Important Stuff first, but some Boxes got mixed up in the Wrong areas as Helpers didn't always ask when we were on the Time Crunch to just get it over here from Paid U-Haul Storage and into the RV Garage.   We've plowed thru just about all of the "Right Now" Towers of Boxes... and there's still a lot of necessary or Important Stuff I haven't located yet.  So, it's likely in the "Later" Towers of Boxes.  *Le Sigh* 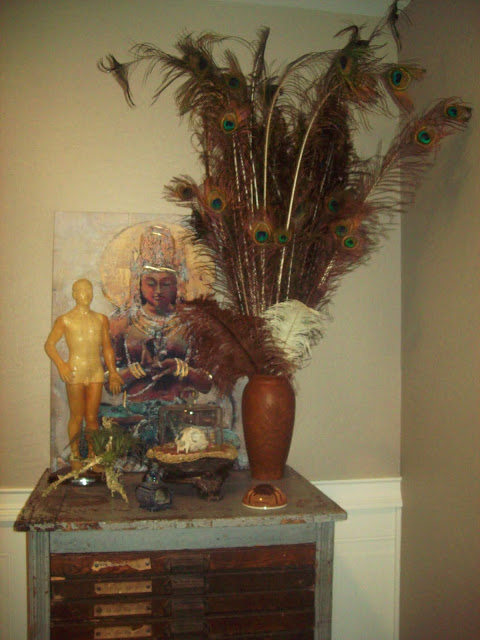 With the Sheltering In Place extended now for at least a Month or more, I have the Luxury of Time to devote to the rest of the unpacking Project that I previously thought might take Years!  *LOL*  The Man has really Surprised me by being on board to help me every Day and stick with it for Hours, breaking down the Boxes after I unpack them.  He actually seems to being Enjoying the productivity he's accomplishing and the Purpose it's given him.  I think the Comfort of a Routine is Beneficial to him, so Establishing this one has been Helpful to reduce his Anxiety levels and PTSD Episodes during the Pandemic and interruption of Normal Life. 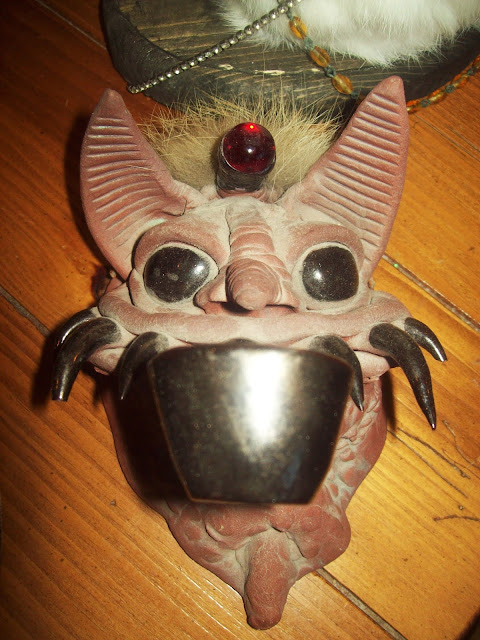 I also located my Cone Incense Burners that will hang on the Wall... this one is a Whimsical Hand-Made Clay and Glazed Troll Creature smoking a Pipe, which is where the Cone goes.  They Sell these for quite a lot at Renaissance Festivals and so Sourcing him for a couple Dollars while Goodwill Hunting was a Score!  He's got Rabbit Fur Hair and Marble Eyeballs and Forehead Horn Marble. 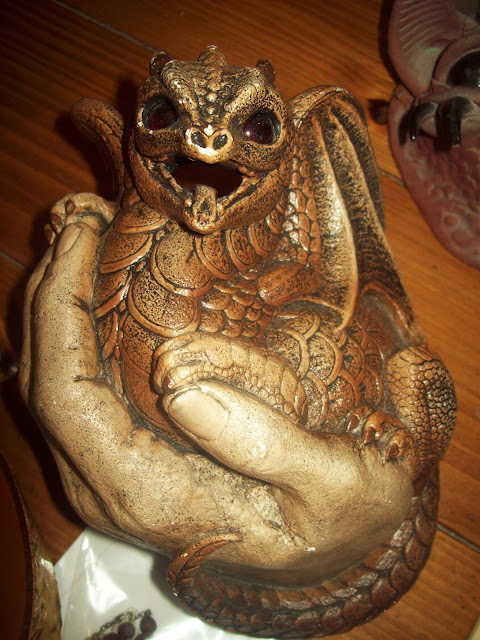 My Windstone Pena Dragon Sconce Incense Holder was a fantastic Score, because I got it for under $15 from "Bookman's" and it's a Rare Pena piece that can Sell for up to a couple Hundred!   It has Red Marble Eyeballs and you can use it as a Nightlight rather than a Votive Candle Holder or Incense Holder, so it has multiple Purposes.  I think I might actually use it as an Electric Nightlight so that the Eyes glow, since my Troll is my Cone Incense Burner... among others I have to burn Incense.  I found most of my Incense Stash too, so the fragrances of Nag Champa, Song Of India and Dragon's Blood is heavy in the air of the RV Garage now. 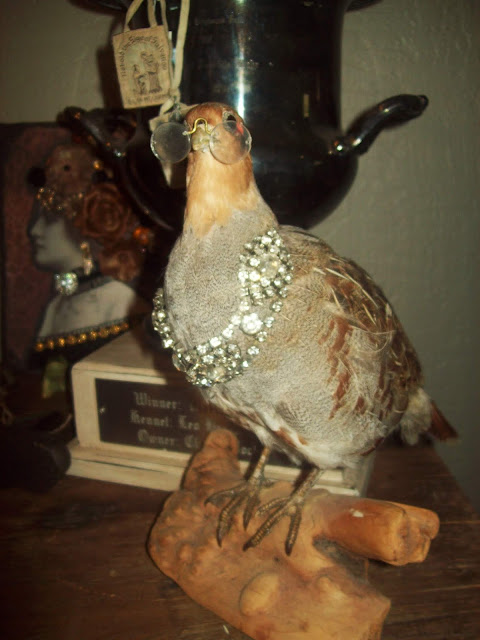 Apparently some of my smaller Taxidermy got inadvertently packed during the Move rather than it all going over to my Friend's House for Safekeeping.  After I got all of it that she'd so generously Stored for me, I knew I was missing pieces and am just now locating them as I unpack Boxes.  So my Bird with Granny Glasses was unpacked Today.  I will be glad when the last Box is unpacked so that I know what arrived intact and what didn't.  So far breakage has been at a minimum, tho' we did have some casualties, they were few so far.  *Whew!*  Taking the Time to pack it all Carefully and Right and do a Self Move certainly Paid Off! 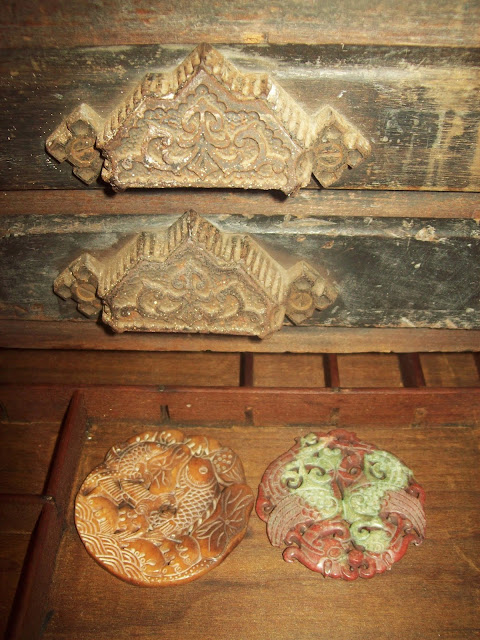 I've finally located a lot of my Jewelry, which I intentionally didn't Label the Boxes as holding Valuables for obvious reasons.   They had to languish in Offsite Storage Units too long to risk identifying things that would entice a Thief to be Tempted.   Though the Units were pretty Secure, I did notice that when you were bringing things in particularly, people Eyeball what you have and were nosy, so I tried to arrive when the Facility didn't have a lot of other Customers or Staff hanging around.  Loss Prevention in Retail is so difficult to curb that it gives you a sense of how Theft is a huge issue now and the most unlikely people are sometimes Thieves and have no Moral Compass. 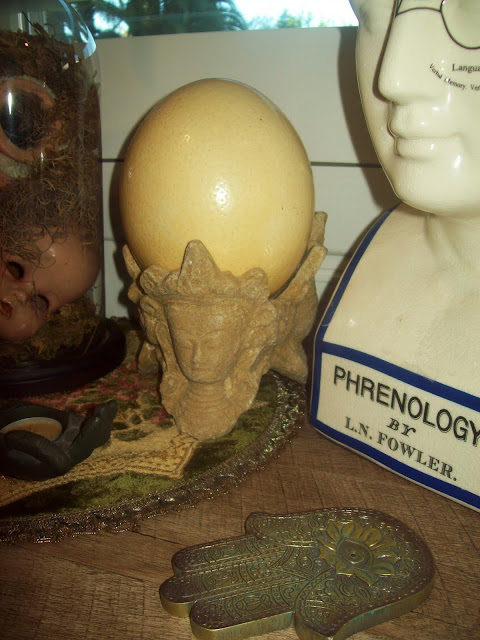 Finding my Egg Holders has aided me in Displaying my Egg Collection.  When I'm Junquing I'm always looking for Interesting things that can double as Egg Holder Displays.   This one holding the Ostrich Egg is one of my Favs, an Asian Sandstone Votive Candle Holder repurposed to hold an Egg.  The Blow Hole in the bottom of the Egg fits right over the Spike used to secure a Pillar Candle so it works perfectly as an Egg Display and is Beautiful and just My Style. 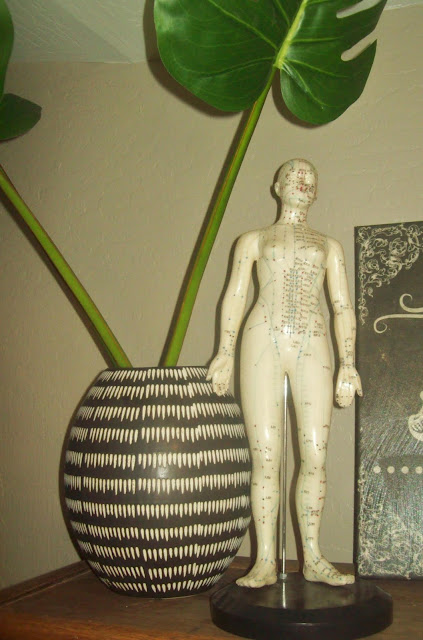 I finally found my Female Acupuncture Display, she had been elusive... whereas her Male counterpart I'd found and unpacked right away after we Moved In.  There's so many things I'd like to Display in the Main House but I can't for lack of sufficient room to.   So I'm trying to be discerning and Curate what comes in to the House.  So hard, when you have an abundance of things you Love and make great Vignettes.  I am thinking I could rotate Displays and Vignettes often, but I doubt I actually will... I know how I am... once I like how it looks I'm probably not gonna bother and make extra Work!  *LOL* 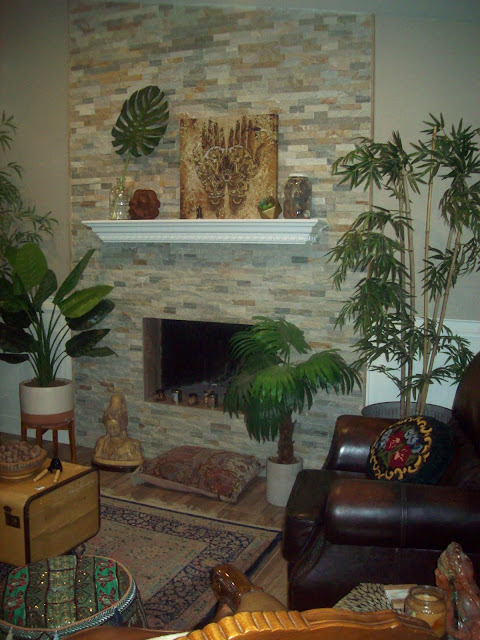 So, that's what we're still up to while Sheltering In Place, it's a large enough Project to keep us busy for the duration and give us plenty of Exercise and something to do to alleviate Boredom and Social Isolation.  Thankfully with Social media and phones we can keep in touch with those not close to us.  The Daughter in Mexico called Today to say she has been given a very nice place to live during the Pandemic, she's House Sitting on the Beach for a wealthy Friend... I was relieved to hear that, since usually she's Homeless.  She is Seriously Mentally Ill with Schizophrenia, among other serious Mental Health Diagnosis, and said this is the first time her Paranoia and incessant Hand Washing has a Benefit!  She's a Riot and has a Wicked Sense of Humor! 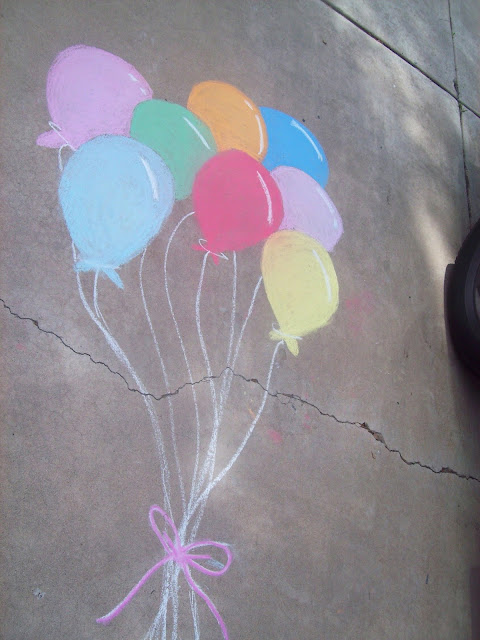 She was worried about us being Safe since she knows her Dad and I are very high risk and are still Raising one of her Daughters.  As is the 90 Year Old Paternal Grandmother, of the G-Kid Force's Three Younger Siblings, that Saint Maria is Raising in Mexico.  She was going to be checking in with Saint Maria after ensuring we were Well and Safe.  She has never owned a TV so didn't know much about the Pandemic except what she was hearing on the Streets from the Street People, so I filled her in on the severity of the situation.  The Homeless and the Seriously Mentally Ill are especially vulnerable during this Pandemic. 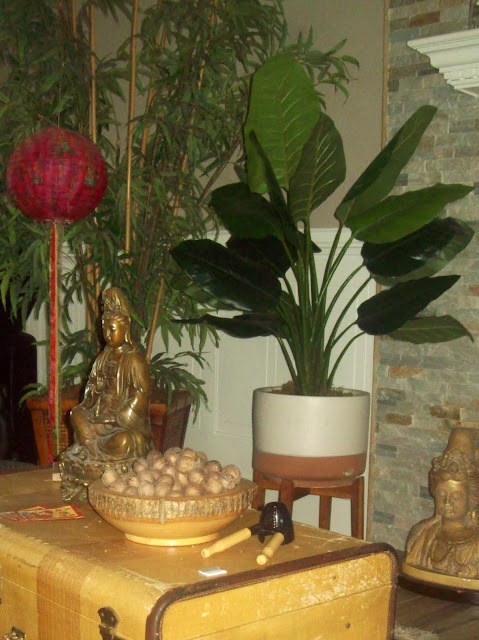 I am so Grateful that my Three Homeless Adult Kiddos {2 Adult Children and an Adult Grandchild}, with significant Disabilities, now each have a Safe place to live for now and aren't on the Streets.   Each of them is also able to keep in touch with us, which gives us Peace of Mind too, since they can't be with us nor around us.   Thank God for Modern Technology and the Sharing of it, since each of them was Generously given a Cell Phone by someone that Cares about them so that they would have a Lifeline during these tenuous times!  The Charity extended during times of Hardship is what will get the most vulnerable in our Societies thru this... and Givers always Gain since Reciprocity is a Divine Law. 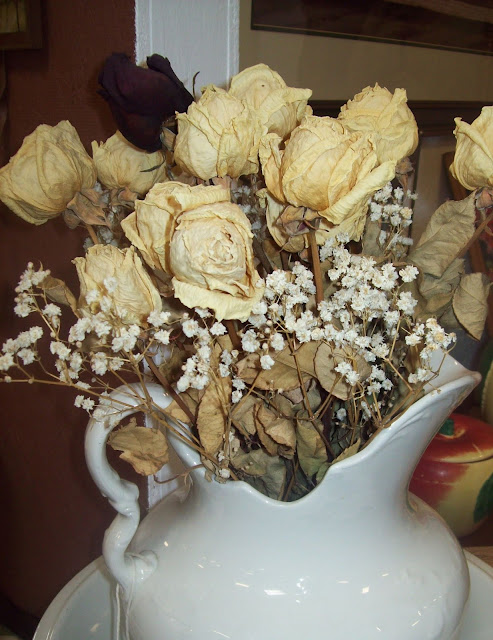 Be Well and Stay Safe and At Home my Friends... Dawn... The Bohemian