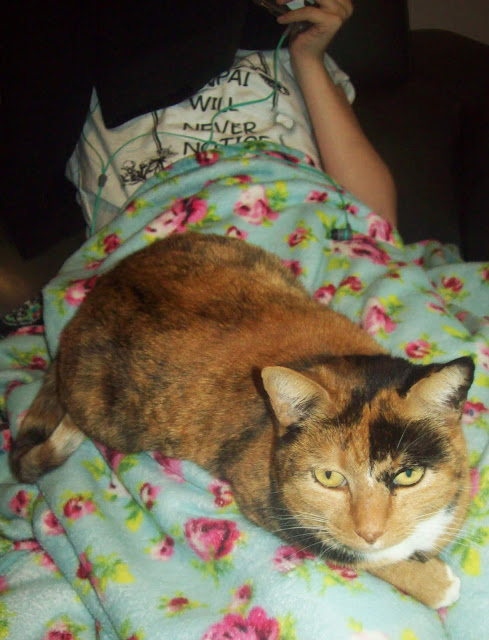 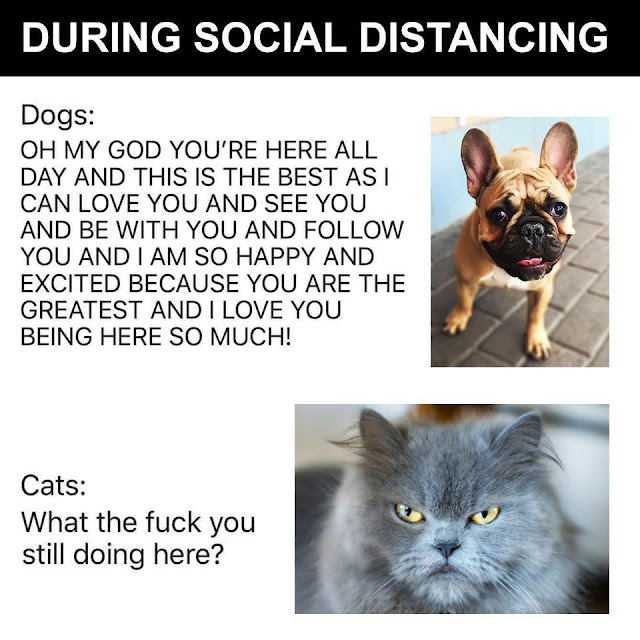 Did you perhaps notice the uncanny resemblance in Countenance between Miss Priss during Social Distancing and the Grey Cat above?!  *LMAO*  She's been stuck like glue to HER Human, Princess T, but as for the rest of us, it's the "What the fuck you still doing here?" Stink Eye Look that we get now!  *Bwahahaha!* 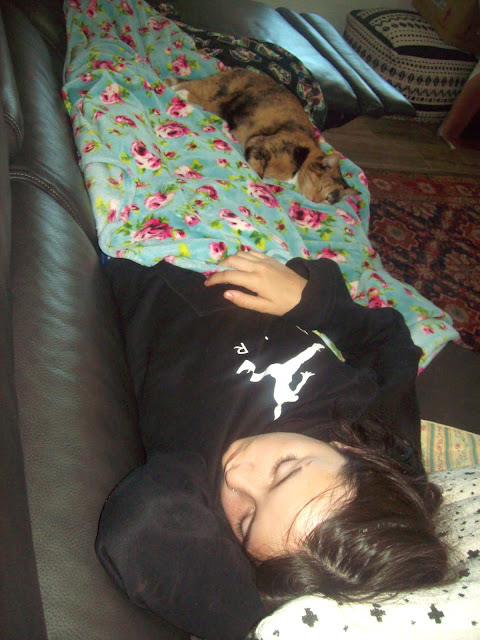 This is also what our Livingroom looks like thruout the Day during Social Distancing... them taking a Morning Nap after Breakfast... 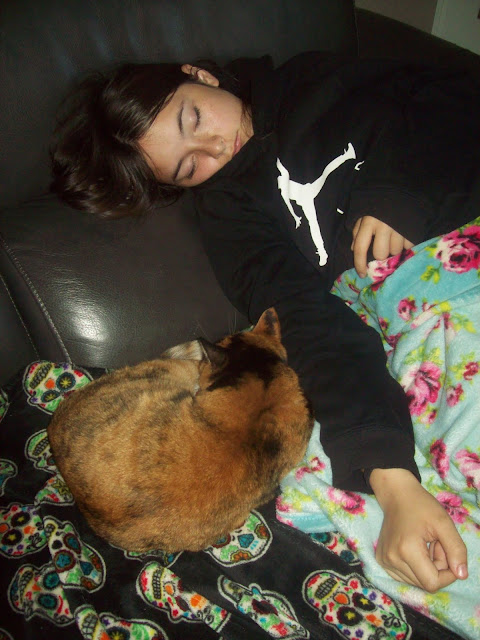 Then a Mid-Afternoon Siesta Nap after Lunch... 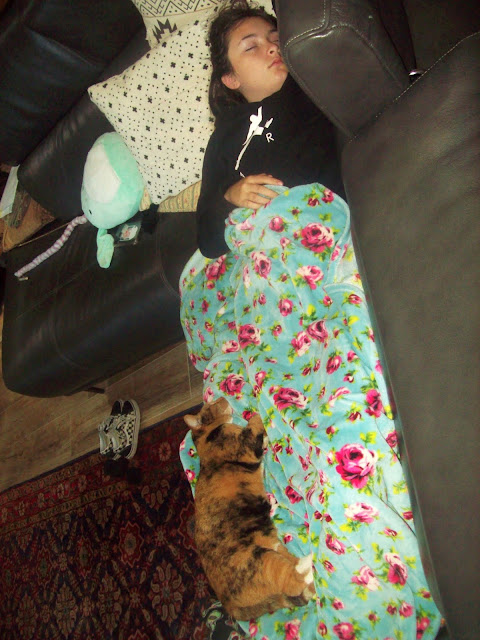 And finally the Early Evening Nap after Dinner, before both of them stay up ALL NIGHT long! *Smiles*  I did finally get her to tackle some of her Online School Work, Under Protest.  I don't think she will EVER mention being Home Schooled again!  *Winks*  I don't mind either of them Sleeping so much, since they both behave better while Asleep than Woke!  *LOL* 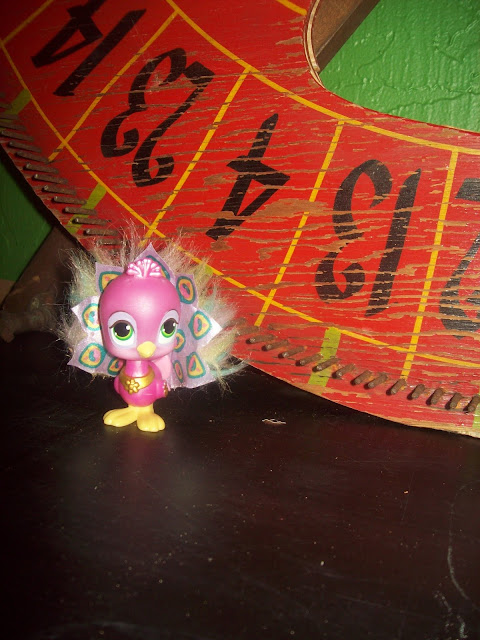 I had thought that she'd be chomping at the bit to Paint this Guest Bedroom, I was Wrong!  The Man says that's because she delegated all the Work to her Minion Boy Posse when her own Bedroom got Painted... and now they're no longer available to Boss around and do everything at her beck and call!  Without Staff, she'd rather Sleep Social Distancing away than Work!  *LMAO* 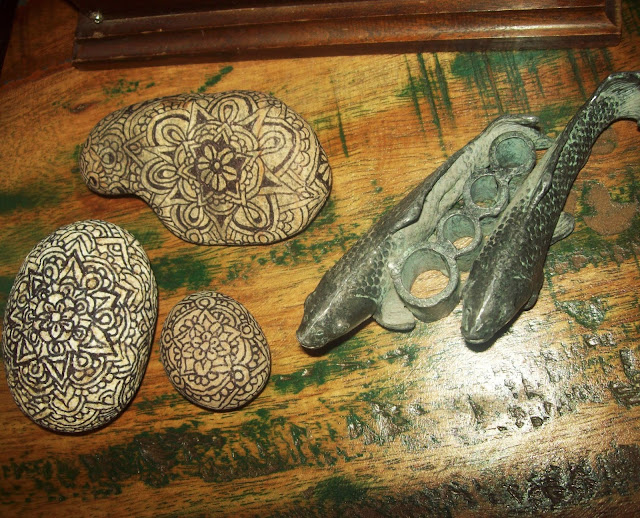 Not I and I won't let The Man be a Slacker during this Social Distancing thang either!  After Breakfast we tackle the RV Garage Project of unpacking and Organizing.  He's in charge of breaking down the Boxes and I'm in charge of him... and everything else being done.  *Winks*  I got almost all my Books unpacked Today that go on my Library Wall Unit.  Our Neighbor T.J. came over to shim the bottom of it to ensure it was level before I packed it with Books.  He'd of installed the Rolling Ladder too, only we couldn't locate the damn Rail it slides on!  *Dammit!*  It's about a 10 Foot Rail so is probably hiding in plain sight!? 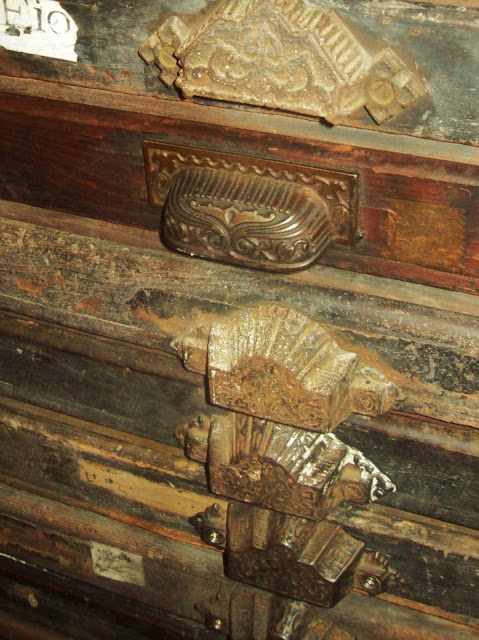 Of coarse Princess T couldn't Help but chime in and ask if her Uncle and his Friends even remembered to bring it over or take it off the U-Haul Truck during The Move!?  Because she's a Ray of fucking Sunshine like that!  *LOL*  I wasn't even Thinking such a thing, until she HAD to mention it, so I won't have a Peace about it now until we locate it and I don't have that Seed of Doubt hanging over me that she Planted in my Head!  *Le Sigh!* 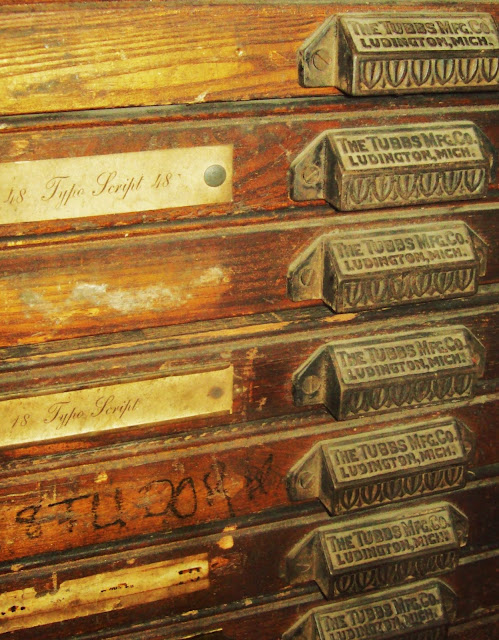 I talked to some Friends on the Phone, some are Social Distancing responsibly like us... and some seem to be Believing 45's "Everything will be Beautiful Speech" he recently gave about having it resolved by Easter... because, you know, that's a Special Day for HIM!  OMG don't even get me started... I just Feel for the Experts like Dr. Anthony Fauci, God Bless him, who have to delicately run damage control behind everything that falls out of this President's Mouth that is bullshit, exaggerations and lies, and do it in such a way they don't get Fired, yet try to responsibly protect the Public and get the Truth out!  The Risks some Friends are taking truly Scares me on their behalf... and for who they might expose beyond Self to the Virus!? 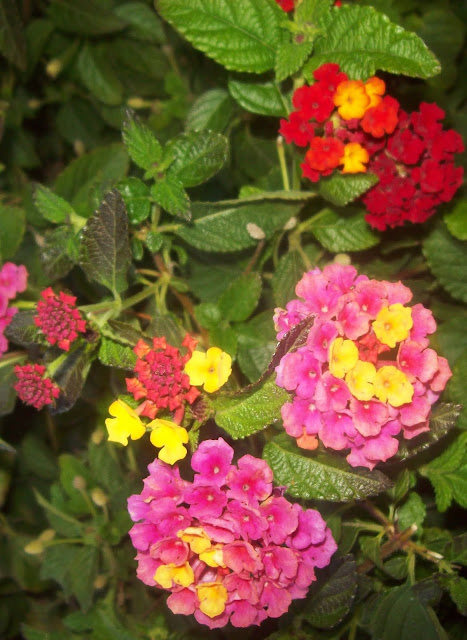 It's not as if anyone can even have proper Funerals if they should succumb, so I couldn't even pay my last Respects to any of them should they croak because they acted like everything is already Fine and copacetic... and we're in Good Hands with this Administration!    Are any of you struggling with people you Care about who just aren't taking this as Seriously as they should yet?!  As The Man reminds me, you cannot alter the Choices and Behavior of other people, especially Grown Ass Adults who just won't Listen or heed the Expert's Advice... and their consequences will be upon them and sadly upon anyone they infect.  It's not all about them, but some aren't acknowledging that Fact! 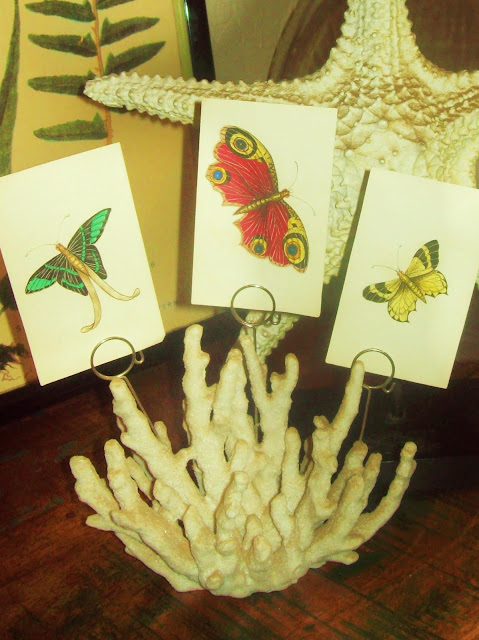 If I feel anyone is being Foolish, my Social Distancing from them is wider now and I'm making that Crystal Clear.  Sorry... Not Sorry... we gotta keep our Family Safe in Life and Death situations and have a Zero Tolerance Policy of Foolish Behavior that puts any of us at even Greater Risk than we already are!  If they choose Russian Roulette with Safety and Wellness, I just can't and won't engage.  Some people seem to be going out MORE than they did before the Pandemic... I suppose because they have more Time Off Work, or more Boredom... or they Need the Adrenaline Rush of taking the Risks and Chances, like a Gambling Addiction, I dunno? 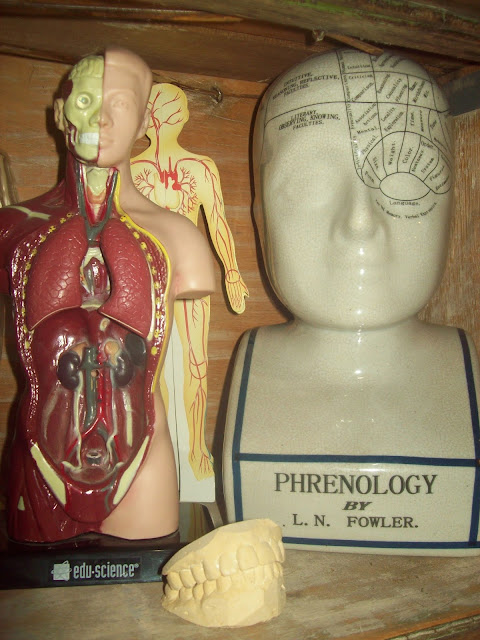 When the people are in Higher Risk Categories themselves, I really don't Get It, do they have a Death Wish I have to Wonder?!?  With the Foolish and Young I can almost Understand the Immaturity of the Invincible Thought Process that plagues many in Youth... but with fellow Seniors, shit, you've managed to live this long, so how could you still be Stupid about shit?!?  Of coarse you have the Seniors that are going on the Record that our Generation should Sacrifice ourselves for the Economy... OMG are they even Serious... #NotDying4WallStreet would be my response to that Idiocy! 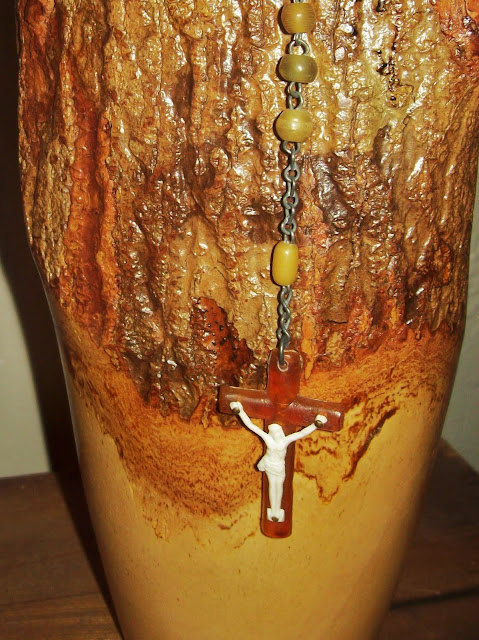 Perhaps most of them are 45 Cult Followers and all I can say is if they are Serious about what they're saying, there will be less of them to Vote for him as they Merrily go down with his Ship and ignorantly think he, as Captain of it, will Bravely go down too and will not jump Ship before it completely sinks!  The Orange Menace has always been ALL for himself, as most Sociopaths are, and so he is without ability to express Empathy or have Conscience, and his own Bottom Line will always be way more Important to him than ANY One of us. Even his Cult he could really give Two shits about, they're a Means to his End and HIS Agenda is all!  Making a lot of his Wealth in the Hospitality Industry and Real Estate, he's seeing it quickly eroding and don't think for a Second that's not his Priority right now and NOT Public Health or the overall Economy for you and for me! 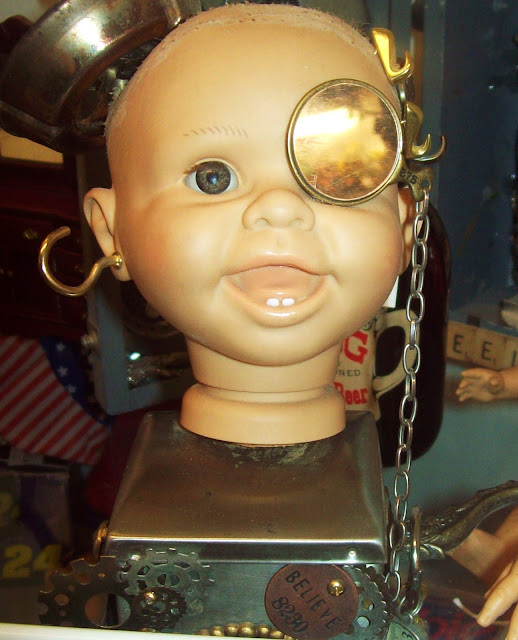 As the Huckster he is and always has been, he will unravel Publicly further if his obscene Wealth becomes more threatened and he knows he's going Bankrupt AGAIN!  Taking the entire Country with him as he recklessly vacillates Minute by Minute, making Life and Death decisions on "Gut Instincts" and Delusions of Grandeur and Ego rather than Facts, prematurely lifts restrictions and seeks advice from Cronies losing their Wealth too and putting Pressure on him, rather than Experts trying to Protect us all and not collapse the Health Care System and have to run catastrophic damage control if they don't get this Right!  And we REALLY cannot Afford to get this Wrong people!!!  So let us put Pressure upon those in Power with Saner Thought towards doing it Right shall we!  This not so tightly wrapped Fool is not a Dictator after all, so let the other Elected Officials quit Acting like he is! 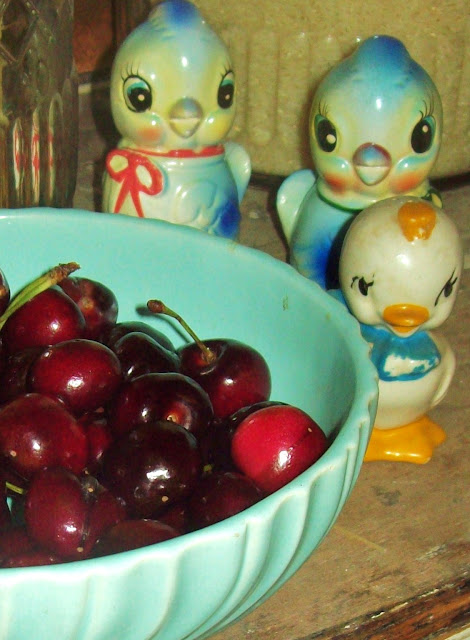 This is mos def NOT a Bowl of Cherries we're Globally Dealing with here and only the very Best Leadership should be Tolerated!  Because Behavior Tolerated is Behavior Accepted... and the Orange Menace's Behavior is not Acceptable by any measure and could Kill people now... a LOT of people... and some of them could be those you and I Love and Cherish and NONE of us is Expendable, no matter what he Thinks regarding putting Money and Things before People!