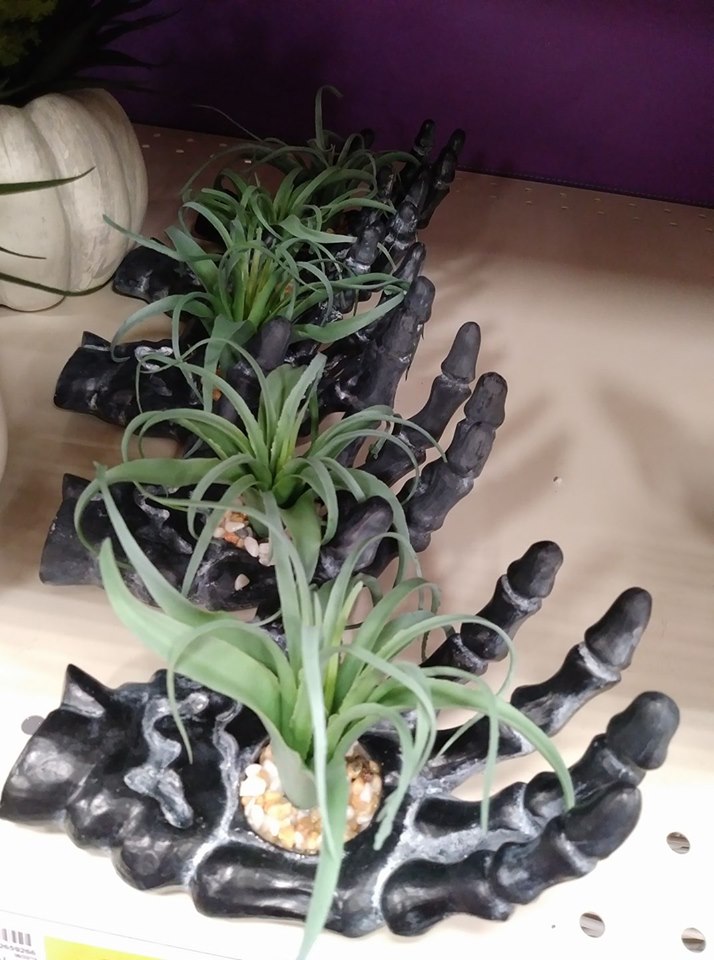 The Pediatric Appointment for Princess T went very well and we got everything taken care of in one fell swoop.  Tho' she will have to come in again by the end of the Month for a Well Child Annual Check-up and Physical around her Birthday.  But the Pharmacy had me languishing for over an Hour waiting on her Prescriptions and then only had a small portion of one of them, so I'll have to go back for the rest when it comes in!  That's a pet peeve of mine living out here in the boonies, everything is quite far from the House and there are so few Games in Town when it comes to any Shops/Pharmacies/Gas Stations/Services, so they run out of everything all of the time!   But, that particular Grocery Store the Pharmacy is in has a nice Seasonal Product section that could rival any I've seen anywhere!  So I spent the Hour Plus meandering the Halloween Section's Products.  I liked the Skeletal Hand holding a faux Air Plant. 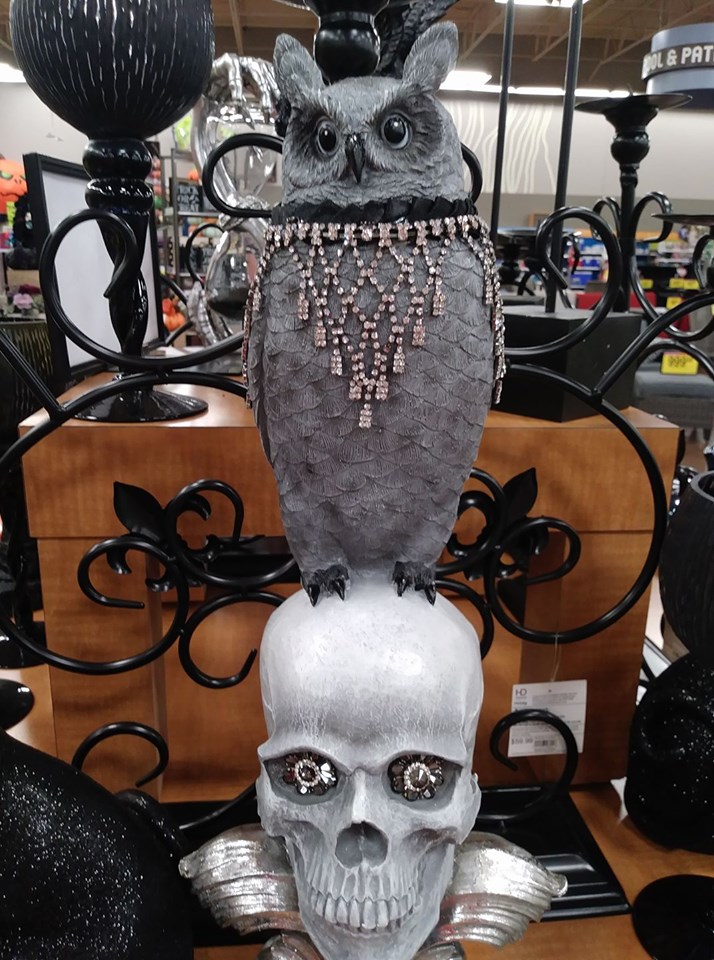 And tho' expensive, the Bling Owl atop a Bling Skully was very unusual and attractive.   There was a lot of Bling on this and it was made of a light Resin... so if nobody buys it when Seasonal Deep Discounted Markdown happens, I could be Tempted.  *LOL*   After Season I've sometimes gotten things as much as 90% Off, which is practically Free, so we'll see what's left in Stock.   Not to mention, buying drastic Markdowns can profit you the next Season if you decide not to Keep it and hawk a Line that is Retired now and no longer being produced.   Every Season they seem to bring out a new Line of everything, so I've done Well in the Selling of previous Lines of the Past that people really liked a lot and can't get anymore. 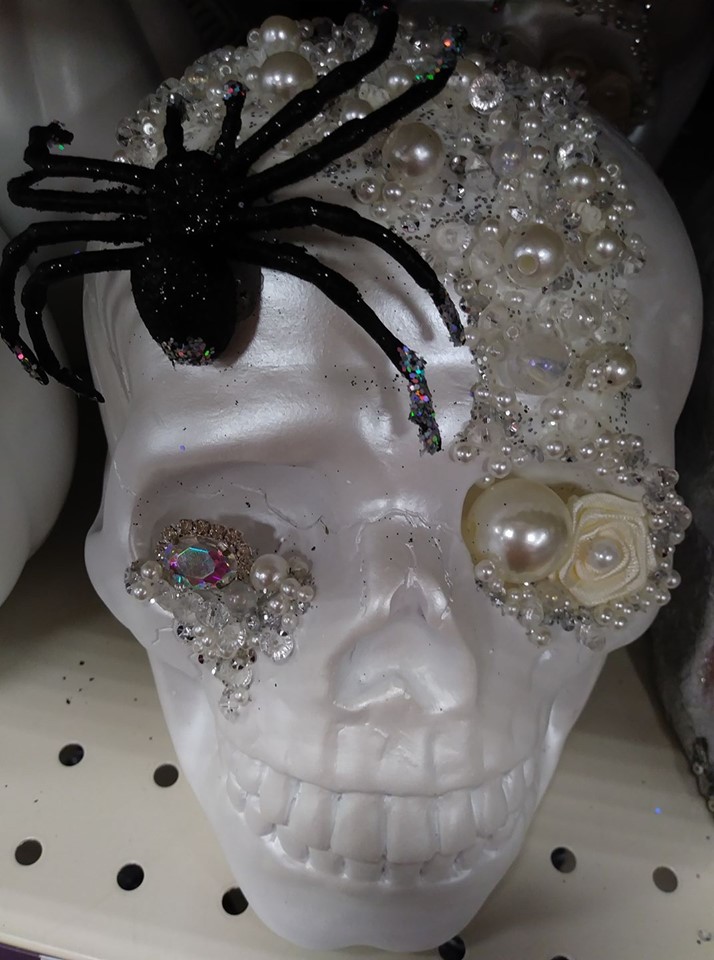 The distraction of wandering Isles of my Favorite Holiday and it's Decor was soothing and calming to me, since we've been Dealing with a LOT!  The Son's Seizures have intensified and he'd had a major one after we'd Celebrated the Grand-Daughter's Birthday and then another one the next Morning!  So I've been on the Phone a lot with the DIL as Paramedics have responded each time, trying to calm her and offer encouragement and advice from afar.   We're at opposite ends of the Valley, yet hearing a crisis with your Adult Child unfolding in Real Time over the Phone is just as terrifying as being there in person!   I have zero experience with Seizures tho', so I really don't know what to do or what to say that is Helpful!?   This is as new to me as it is to her... and of coarse he's unaware of them after they pass and often uncooperative to receive Treatment.   Since he assumes he's Fine and neurologically impaired after having suffered one to make any rational decisions for himself! 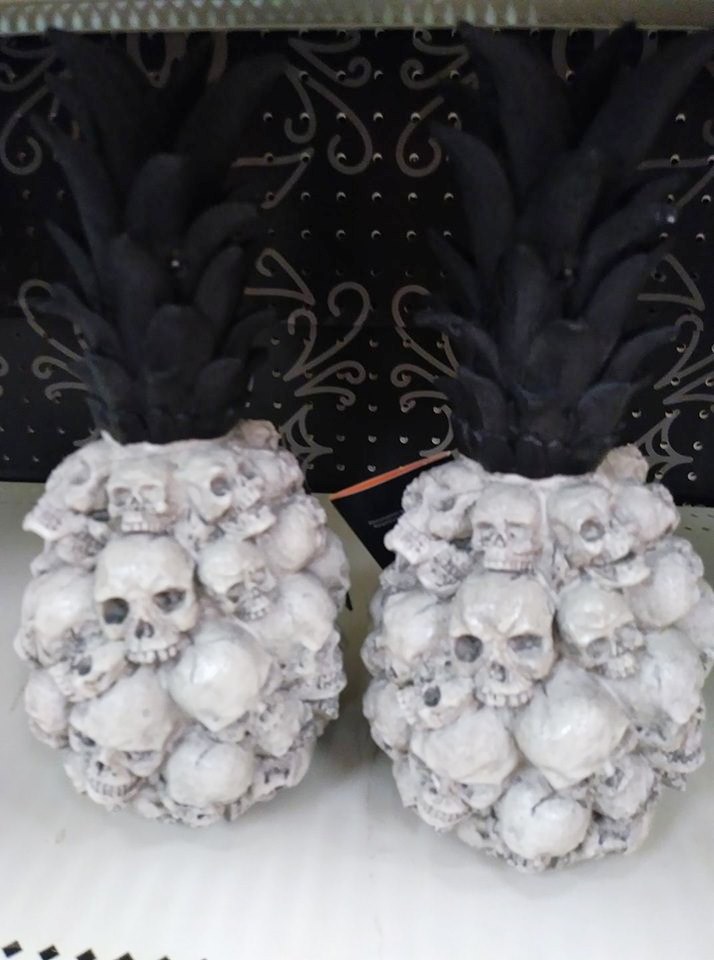 Tests and Diagnosis have been inconclusive each time he's been rushed to the ER so it's all seemed futile at times when they just send him Home and say that whenever he gets Insurance, to get a Primary Physician to then refer him to a Specialist!!!   And you see the key phrase here: WHENEVER HE GETS INSURANCE... because if you have inadequate Insurance or no Insurance, really, they don't want to Treat you except with the least they are required by Law to do for you to get you back out the doors.   I understand that Hospitals and Doctors are For Profit Businesses, but underinsured and uninsured Americans often aren't receiving adequate Care or don't seek Care because they cannot pay the astronomical costs for Care or their Medicines.  It is a problem Nationally that has yet to be properly addressed and people will die for lack of appropriate Care or inability to afford the Meds they need to Survive. 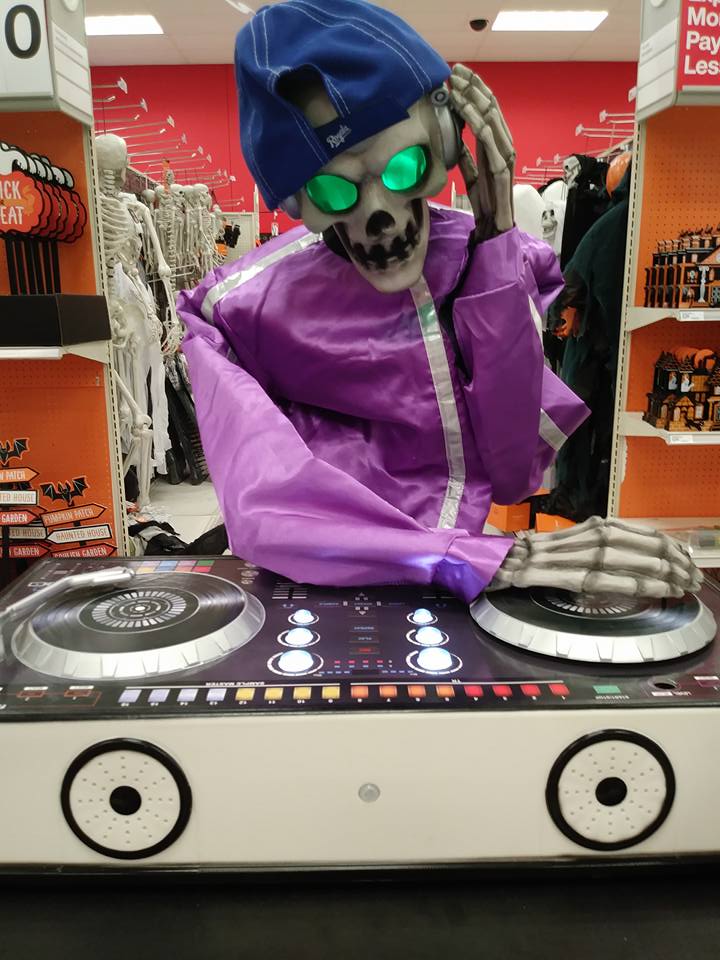 I was talking to Princess T's Pediatrician and he was saying even such things as Immunizations have put a lot of Pediatrics out of business because in some disadvantaged areas, the Families only come in for the mandatory immunizations.  Apparently, Insurance Companies only reimburse barely the Cost of those Immunizations for the Clinics, so they aren't making any profits from administering them.  Therefore, they have to rely upon the Well Child and Sick Child visits to compensate for that loss of revenue and stay in business, many have simply folded.   Hearing the problem from the perspective of someone in the Industry, clearly they are as frustrated as the Public is about how The System is currently operating.   Our Pediatrician is an exemplary one and he Loves Children and does a lot of Volunteer Work on his own time... but he has to make a Living at what he worked hard to become... as do all Medical Professionals.   I think Big Pharma and Insurance Companies are the ones pulling in the biggest profits at the expense of Clients and possibly some in the Field of Medicine striving to stay in business? 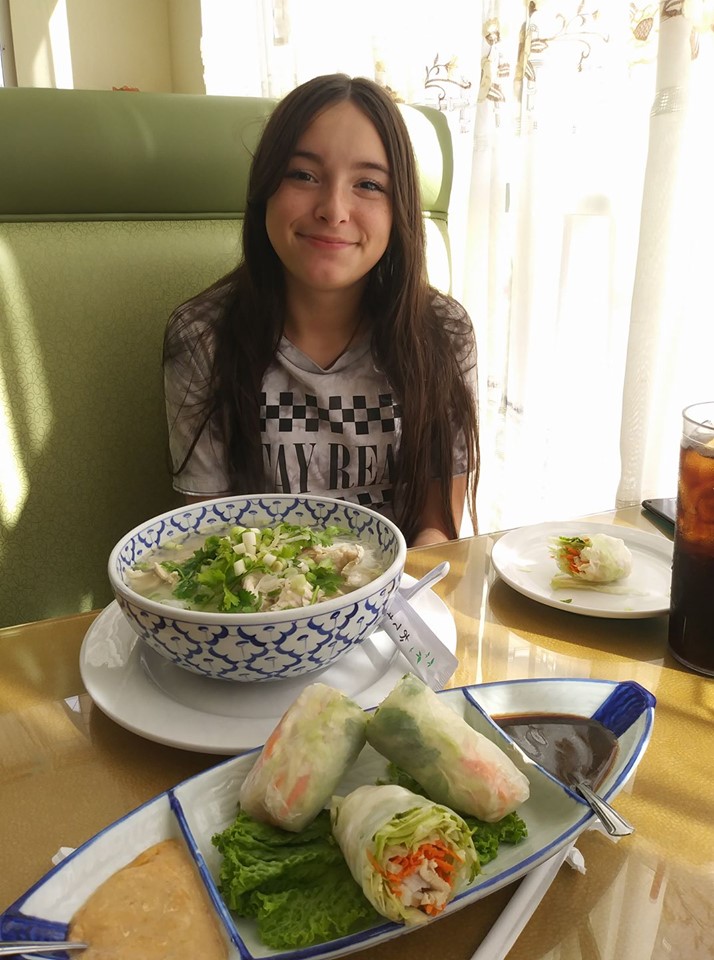 Anyway, he was impressed with how Tough Princess T was yet again, he knows how much this Kiddo has been thru Medically since Birth.   She sat solid as a Rock while he dug out the ingrown Toenail, she was stoic 'til he and the P.A. left the room, then crumbled from the Anxiety of it all.   She got a little Sick after that and threw up once Home, so I'd not dragged her along to the Pharmacy. Thank Goodness, since it took over an Hour and a Half to get her Rx partially filled and she couldn't have lasted... along with the Emergency Calls from the DIL it would have been too much for me having a Sick Kid in tow too!   The Man said after throwing up she immediately fell sound asleep from Emotional and Physical exhaustion of it all.   This above pix was just prior to her Appointment, when I got her some Thai Chicken Pho, which helped ease her intense coughing fits... and some Summer Spring Rolls.   She didn't eat much of it, but she'd been unable to eat for Days really due to her Stomach issues, so I get down her what I can, that I know she Loves and enjoys eating... even if it won't stay down long. 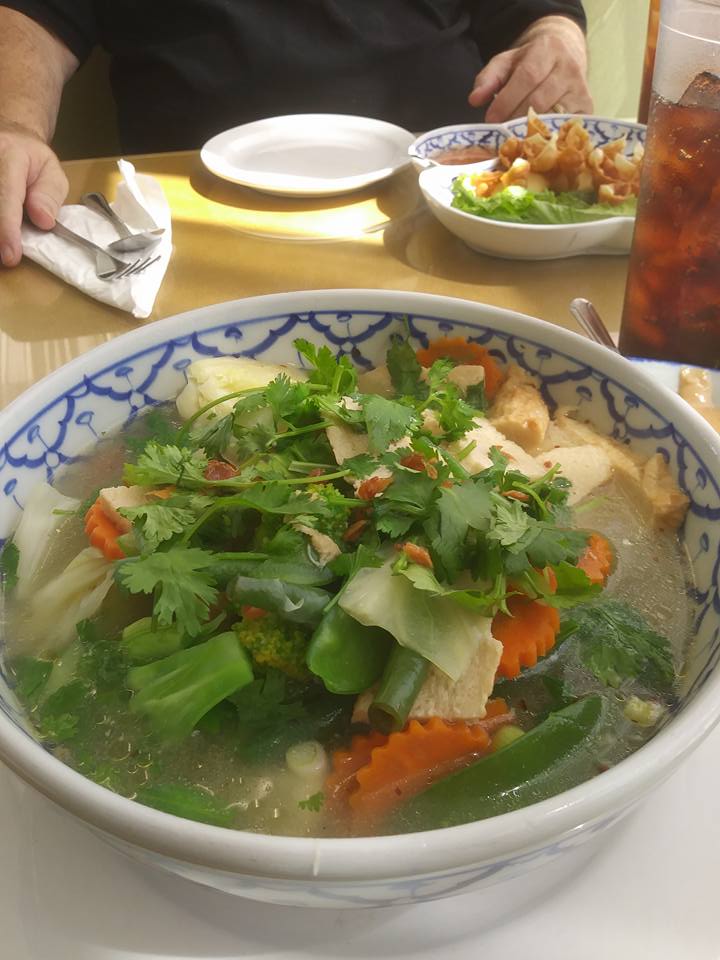 The Spices and Herbs in the Thai Soups really eases her congestion, we keep it Mild for her due to the Stomach Issues, and she says it helps her not to feel like she's choking and it's a relief to her Body not to Cough continuously.  She's very sore from Coughing fits and ends up with massive Headaches, exhaustion, she had a low Grade Fever and Respiratory Infection evident.  Since she's had severe Respiratory Issues since Birth, she can go downhill so fast that I take it very Seriously whenever she has any Respiratory distress, no matter how early or slight, since it intensifies quickly with her!   We're back to her having to Sleep upright in a Recliner in order to Breathe. 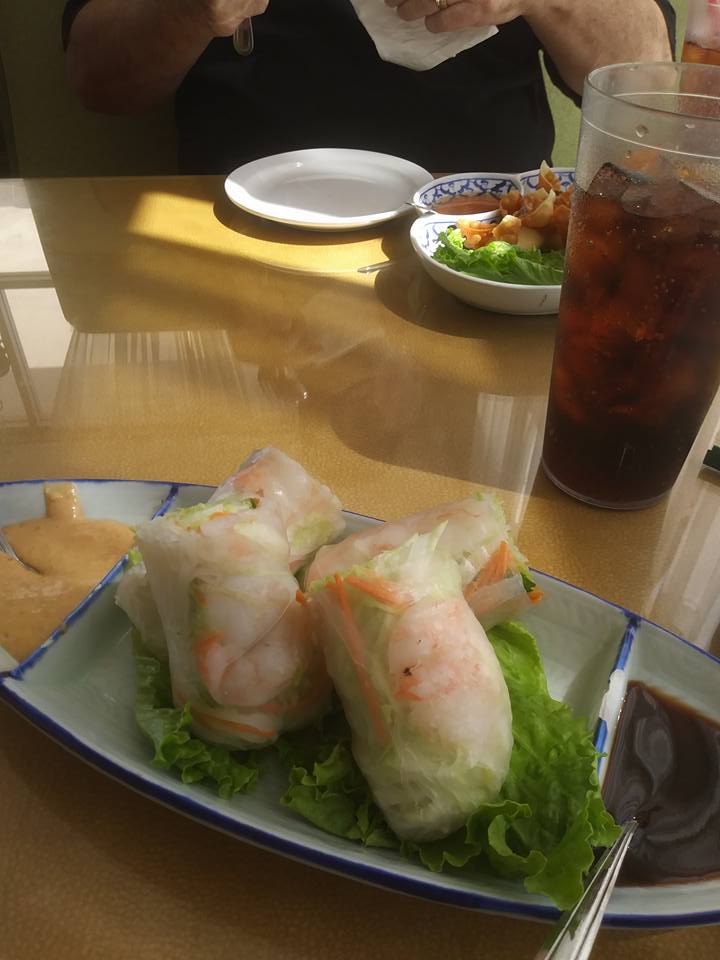 I also make sure she's not having any more Tumor growth in her Throat like she's had in the Past.   Thankfully she hasn't and the last one was benign but it was a Dog and Pony Show to get the Surgery approved and done, Pre-Adoption, when she was a Ward of the State and they made all those types of decisions and wouldn't allow me to.  Slow behemoth the State is, it took over a Year to cut thru the Red Tape and have her Tumor removed, even tho' it was growing rapidly and could have been malignant for all they knew before pathology of it ascertained it was benign!   Thankfully, now that I have Adopted her and am Legally 'Mom', I can make those decisions in a timely fashion on her behalf, which is such a Relief!   At least for a Minor Child you CAN make important Medical Decisions for them when they can't, more difficult with an Adult Child who might have impairment and cannot make good decisions for themselves without Court Orders and such.   And most especially if when you do convince them to go in nothing is done for them... 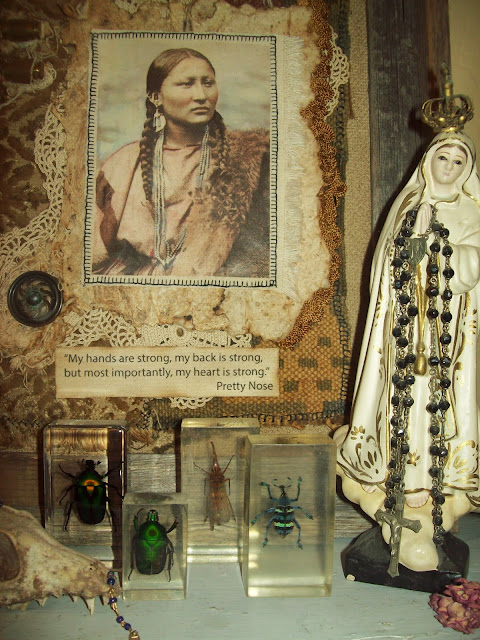